How to grow potatoes. For me potatoes are the backbone of the vegetable garden. If you get the seed potatoes in relatively early, there is very little to do apart from earthing up and keeping an eye out for blight. Potatoes break up the soil nicely for the following crop, and should provide an excellent yield from a relatively small space. There is also something so exciting about turning the soil at harvest time to see what you've got. I must admit to being a bit of a klutz here, and I manage to stab nearly every one with the prongs of my fork....

One thing I struggled to understand when I started growing was the different potato groups: first earlies, second earlies…I mean what's all that about? Well, it's quite simple really. The names refer to the amount of time the potato takes to mature: early varieties take less days to mature. They also tend to be smaller sized potatoes than the maincrop varieties.

How long do potatoes take to grow?

If you are a beginner, I'd highly recommend you stick to earlies. They take up less space and will provide you with a quicker crop. First earlies can be ready to harvest 10 weeks after planting. There is also a noticeable difference in the flavour of freshly-dug early potatoes as opposed to maincrop potatoes which you store. Earlies are a great choice for home gardening on a small plot, as you will have time to put in another crop once they are harvested. Thus you’ll make better use of the space in your garden. Crucially, you're also likely to avoid the disease potato blight for the reasons I'll explain now:

Avoiding Blight. Potato Blight is an air borne disease which is at its worst in the more humid weather of July and August. There is really no way to treat it organically and (sadly) it is highly likely to occur. How badly it may affect your crop depends on the variety. There are 2 main ways the organic gardener can cope with the problem. These methods are based more on avoiding rather than treating the disease. 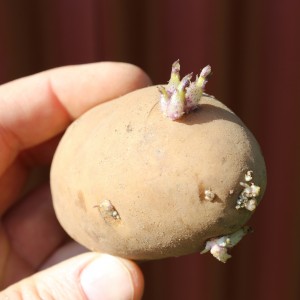 Chitting Potatoes Chitting potatoes is leaving the seed potato exposed to light for a week or two, causing it to produce sprouts. The idea is that it gives you a head start of about 10 days before you plant them in the ground. A potato has a blunt end with a number of small depressions or ‘eyes’. Place the potatoes in egg boxes on a windowsill with the ‘eyes’ facing upwards for 5-6 weeks until they start to form small shoots. They are ready to plant when the shoots are about 1.5 to 2cm long. You don't want the shoots to get too long or they are likely to snap off when you plant the potato. N.B. You don't have to do this. They will still grow if you just stick them in the ground. Chitting just speeds things up, which is only relevant for early planted crops. 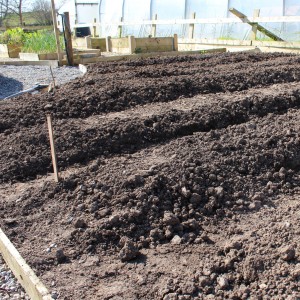 Planting Potatoes Planting seed potatoes in ridges is recommended as it makes them much easier to earth up. Ridges are rows of mounded soil. Above is a photo of our potato beds in the Quickcrop garden. Plant the potato 10 to 15cm deep into good fertile soil. It is traditional to plant with the side with the most 'eyes' or little shoots facing upwards. However in our experience this makes little or no difference.

You can have a break now and watch our organic expert Klaus Laitenberger and myself bring you through the potato growing year:

Crop Care - Earthing up ‘Earthing up’ means dragging the surrounding soil up around the growing shoots of the potato plant. It might feel odd to cover the new growth but it has a number of benefits:

Apart from frost protection you should earth up when the plant is approx 20cm high.

Potato Blight You are unlikely to get blight before July, so you should be o.k. with the early varieties. You will notice blight on the leaves first. If the attack isn't too severe you can just remove the affected leaves. If the problem persists you will need to remove all the foliage as already mentioned. Don't dig up the potatoes at this stage, as the tubers need to form a skin for storage. You should leave maincrop varieties in the ground until October to allow this to happen.

Foliar and tuber blight resistance Blight attacks the leaves of your potato plant first. If left unchecked, it will travel down and infect your tubers. Blight resistance in potatoes can refer to the leaves (foliar) or the tuber (the potato under the ground), but most people tend to think of foliar resistance only. Take for example a potato with mid-range foliar but high tuber resistance: the plant may be infected to such a degree above the ground that the foliage needs to be removed, but the crop underground will be unaffected and should store perfectly well.

The British Potato Variety Database The British potato variety database is a handy online site which gives you information on most varieties you’re likely to encounter as a home grower. It’s not the most fabulous looking site in the world, but the information is excellent. It provides you with foliar and tuber blight resistance info, as well as informing you of resistance to other pests and diseases - like common scab or eelworm. A very handy tool when you’re deciding what varieties to grow. 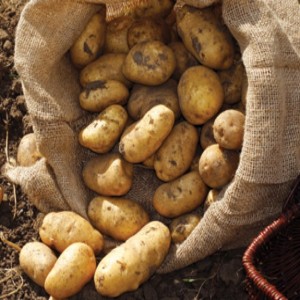 Harvesting Potatoes Many books will tell you to wait until the plant flowers before harvesting potatoes. However some varieties - like Orla - don't flower at all in some years. See harvesting times above. Early potato varieties should be harvested as you need them because they don't store well. There is nothing nicer than a freshly dug new potato, so get 'em out of the ground and into the pot! Maincrop varieties can remain in the ground over winter - unless you have a wet garden or a high slug population. I think it's safer to dig and store, especially in Ireland. Store in boxes of sand or hessian potato bags in a cool frost free shed. Check periodically for any signs of rot, and remove affected tubers. It's important you harvest all the potatoes, or they'll come up again next year as weeds!

Growing in Containers Potatoes (particularly the early varieties) are very suitable for growing in pots and containers. Indeed, growing in containers provides a number of benefits compared to growing outdoors. The first is, of course, portability: the container can be moved around from patio to balcony or placed in full sun. When the potatoes are ready to harvest, you won’t have to go at the soil with a fork or a hoe (potentially damaging the tubers). The container will also protect the potatoes from pests, worms etc.

Choose a large, deep pot to plant them in - it should be at least 15 inches deep. The larger the container, the more room the roots have to stretch out. Buckets, dustbins, tyres, grow bags…all of these can be used or repurposed to grow potatoes. Fill the container to 4 or 5 inches with peat-free, multipurpose compost or high-quality potting soil. Place the seed potatoes (ideally they should be chitted) with the ‘eyes’ side facing up, and cover with 8-10cm of compost. Have the containers in a sun-facing area for a good 6-8 hours a day. As the potatoes grow you can ‘earth up’ in a similar way to that we mentioned earlier.

One thing to watch out for when growing potatoes in containers is that the soil will dry out quicker - so you will need to water more regularly than if your potatoes were growing in the ground outside. Water thoroughly and wait until it’s leaking out the bottom.