I thought we'd start the garden update with a couple of photos taken last evening while having a walk on a local bog. The photo above is of Eriophorum angustifolium or bog cotton (oddly, the county flower of greater Manchester) whose white tufts are a familiar sight on acidic moorland. I always wondered whether you could make cotton thread from the plant but apparently not, the fibres are too brittle. It was, however, used in Sweden as a pillow stuffing and in Scotland during World War 1 to dress the wounds of returning soldiers. 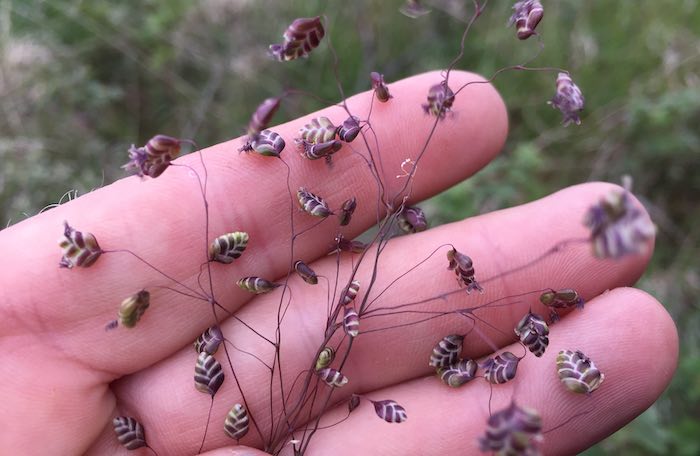 I got very excited when I also spotted the pretty grass above as it is one of the new friends I had uploaded to the site last week as part of our new perennial section (more on this next week) so lovely to see it in the wild. This is Briza media or Quaking grass which has delicate seed heads suspended on wiry stems that jiggle like miniature mobiles (not phones!) in the wind. This one was difficult to photograph as it was busy jiggling in the breeze at the time so had to be grasped to keep it still. 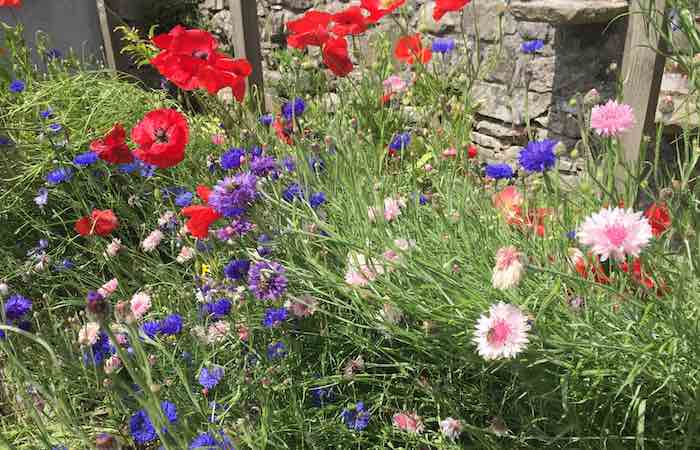 The photo above is of a raised bed outside my back door where I sowed some wildflower seeds including purple, blue and pink cornflower, poppies and poached egg plant which is hiding in there somewhere. As an experiment I sowed these in modules last Autumn and planted them out in October; they survived the winter and gave a very early display which is showing no signs of stopping. The great thing about the current movement towards pollinator friendly gardening is you can spend 5 minutes flinging a pack of seeds around and end up looking like a garden hero. This bed is always full of bees, you can see two honeybees in the centre of the purple cornflowers in the middle if you peer closely enough. 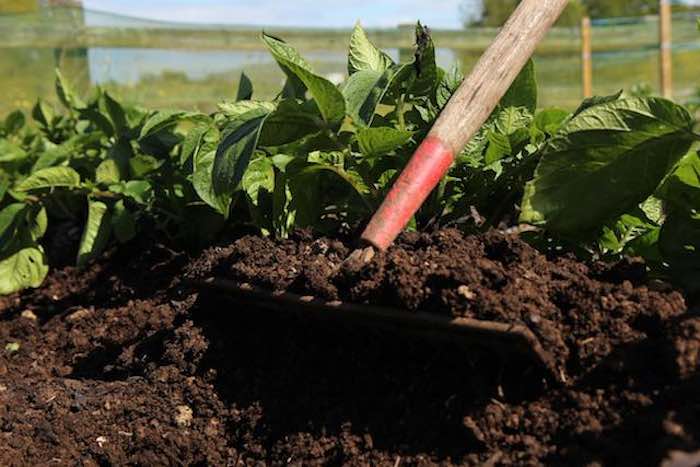 Earthing up potatoes It is best to earth up your potatoes when they are around 20cm tall by dragging soil up around the plant and covering half the foliage (10cm). I have left it late in the photo as the plants are a little tall but they will be fine. Earthing up is well worth doing as it adds an extras layer of soil above the tubers which helps protect from foliar blight (there is more soil between the surface and the potatoes so less chance of blight spores reaching them) and reduces the chance of potatoes coming to the surface and turning green and poisonous. Earthing up will also increase yield slightly as more tubers are produced in the extra soil. 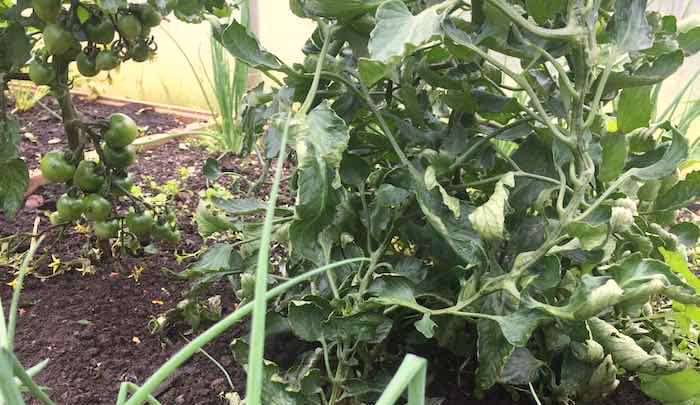 Trimming tomato foliage If you read any of my early mails this season you will know I went to an amount of trouble deep planting tomato seedlings in progressively larger pots to grow whopper plants. It's all going very well BTW, I have healthy vines with plenty of fruit but they are (or were) a bit leafy around their bottoms due to the deep planting. As tomatoes grow up their vines it is a good idea to trim out a few of the lower branches to improve air flow around the plant (helps prevent fungal disease) and to let the sunlight get at the lower fruit trusses. Don't go overboard but removing 2 or three branches won't do any harm especially as there is still plenty of new leaf growth happening further up. 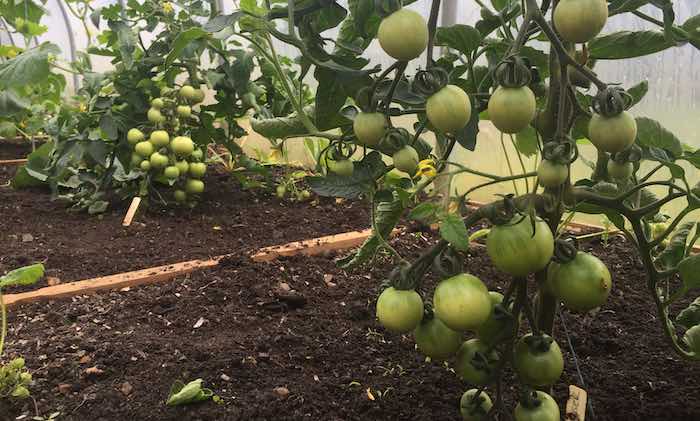 As you see the tomato above looks a lot happier around it's nether regions than the confused mess above. Use the old woodworking adage 'measure twice, cut once' to make sure you don't snip off a truss of tomatoes by mistake, it's easily done. If you're interested, that's a heritage tomato 'Harbringer' which I got from Brown Envelope Seeds and is growing away like the clappers. Oh, and now that tomato fruit has started to swell, keep your watering even to prevent the fruit from splitting. If you have left them a bit dry gradually increase watering over a few days rather than an immediate flood. 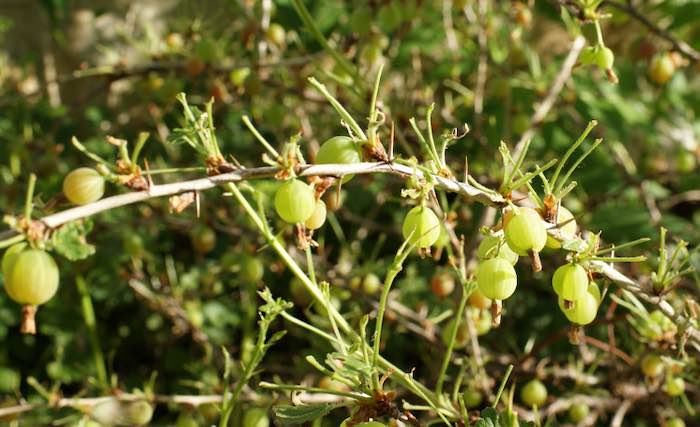 Gooseberry Sawfly If you think cabbage white caterpillars are voracious you want to see the damage that gooseberry sawfly larvae can do to a gooseberry or blackcurrant bush if you haven't been keeping an eye on them. The sawfly lays eggs low down in the bush where they can be easily missed, when they hatch the caterpillars quickly move upwards and often (and in my case) completely defoliate the bush. Gooseberries will likely survive being completely stripped but yield will obviously be reduced. I am especially ticked off as the bushes worst effected were my 'Balck Velvet' which has a really fabulous flavour. 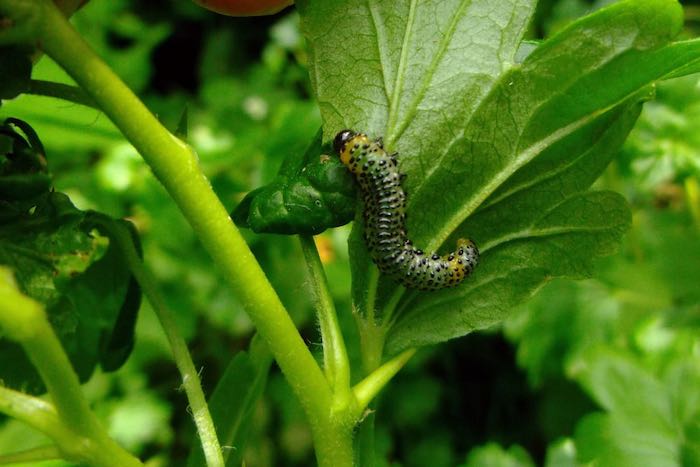 You can usually spot the caterpillars before they do too much damage but you need to check daily (says me). They can be controlled organically using pyrethrum (brand name Pyrol amongst others) but will need a number of applications. If you aim a strong blast of water upwards from the centre of the bush every now and then you will dislodge most of the caterpillars which will need to be squished with your boot. Any with a better grip will need to be removed and dispatched by hand. 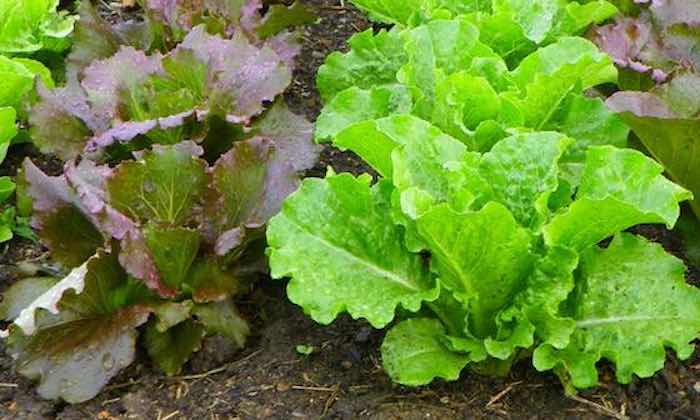 Succession sowing tip Remember to keep sowing small amounts of staples like lettuce, coriander, beetroot, spinach, radish and spring onion to keep a fresh supply. Regular small sowings are especially important with plants that are prone to bolting like coriander, oriental salads or spinach, a few seeds sown in modules every few weeks ensures you always have a supply of plants at their best. That's about it for this week. Next week I will be going through some of out new pollinator friendly perennial plants and looking at some quick and easy planting plans. See you next week Andrew