I had always read Jane Powers' Irish Times articles with interest so I was quite excited when I answered the phone one day and found herself on the other end. She was doing an article on raised beds, it was our first year in business and I must admit to being rather flattered she knew about us at all. As it turned out Jane's own raised beds were looking a little sorry for themselves so we got the job of replacing them. We made a bleary appearance in her garden after a very early slot on TV3 (This means leaving Sligo at 4am) to measure up. I think I'd even forgotten the measuring tape. Anyway, to cut a long story short when we returned to install the beds it quickly became apparent my measurements were incorrect and we'd have to re-do them. We returned a second time only to find I had messed it up again and we were still a little short. Niall was looking mortified, I looked confused while Jane's husband Jonathan thought it was hilarious. Jonathan gave voice to what Niall was thinking by saying (tongue in cheek of course) "Well done guys, probably one of the most important beds you'll put in this year and you've made a complete bags of it". Well, we had and we hadn't, it's amazing how making a pigs ear of something breaks the ice. The beds worked well in the end and we made a great connection with two very entertaining people. 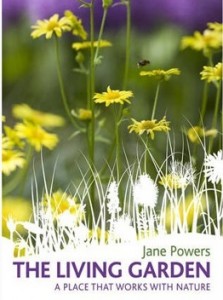 The last time I saw Jane was at the launch in of her highly acclaimed book 'The Living Garden, A place that works with nature'. It's like getting the double album after hearing some of the singles. The style, wit and sensitivity of her articles are all there while the book format gives Jane the space to expand on a subject she clearly loves. I find there are few enough gardening books you'll read from cover to cover but this is definitely one of them. We're highly recommending this for your Christmas list, treat yourself or buy one for your favourite gardener. Jane has since moved from her regular slot in the Irish Times to concentrate on her second book. How can we survive without her ? Fear not, Jane continues her seasonal bulletins on her blog 'One Bean Row' which is essential reading for any Irish gardener. You don't even need to buy the paper! So here we go, Quickcrop interview No.1 with huge thanks to Jane Powers: What got you into gardening in the first place? Have you always had the desire to grow things? I know it's a bit of a garden writer's career cliché, but I did start very young, growing easy stuff like radishes, scallions, lettuce and nasturtiums. I came at the tail end of the family, and I spent a lot of time on my own. I was very interested in poking around at things in the garden. I would pull flowers apart to see what was going on inside them, and unfold leaf buds, and watch bugs. (One of the curses of being middle-aged now is that I need reading glasses, and the macro world is not so immediately accessible any more.) We moved every few years. I can remember the individual plants in the gardens far better than the rooms indoors. I know your Father was a writer, how important was it to follow him and move from articles to making your own book? My father, J.F. Powers, was the slowest writer in the world. His last book took over twenty years to write — partly because of the incessant moving between Ireland and the United States, and partly because of his perfectionism and dithering. He used to proudly tell a story about how he spent a whole day deciding whether one of his characters should address the other as "pal" or "chum". Unfortunately I inherited his pal-or-chum indecisiveness, so I'm a slow writer too. My mother also wrote, so there was usually a typewriter clacking away somewhere. It took me a long time to find out that I was a writer too, but I know that's what I am now, and I could never imagine doing anything else. My father, by the way, wrote only five books in his lifetime, but he was, in fact, writing reams — literally — of material in the form of letters to his friends. They are brilliantly funny and economical — sparkling and spiky gems of the artist's struggle to be a family man (at which he was abysmal), and snapshots of social history from Ireland and America. My sister, Katherine, who is a really smart book critic, has edited a book of the letters. It will be published in the next couple of years. It's his sixth book really, the one that he wrote without realising it was actually a book. You have passed the torch to Fionnuala Fallon at the Irish Times and are now concentrating on your blog, One Bean Row, for your regular articles. It must be a great new found freedom not having an editor to worry about. Is it a liberating experience? 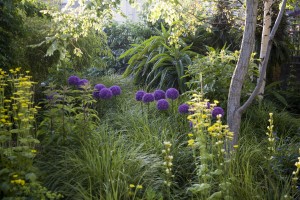 I've always been pretty lucky with editors. Of the 700-plus columns that I wrote for the Irish Times, only two were ever questioned — and no, I won't say what they were, because I'm using them in my blog, One Bean Row! Having said that, I love that I can write about whatever I like in the blog, especially when it is an abstruse — but infinitely interesting — subject, such as dunnock sex, or the life on the underside of a chilli leaf. And I like matching words and pictures, and adding the odd bit of video: it's like being the head of your own tiny media house. I should post more frequently, but I'm not a fast writer, and I feel that it should be well written, even though it's "only" a blog. Your reader is giving up a chunk of time, and part of the bargain is that you entertain him or her in return. Go to 'One Bean Row' Clearly you have a particular interest in the balance of nature, the desire to co-exist rather than shape and control. Should we not just let our gardens run wild? Actually, the greatest biodiversity in a garden is achieved by managing it. If you let a garden go wild, it will eventually revert to woodland or scrub, and there will be a loss of sunlight and open spaces. Fewer creatures will be able to survive in it. The more habitats you have the more life there is in it. Even a "wild" garden needs a gentle hand tending it. Vegetable gardeners are a terrible lot for digging. You can't get past the first few pages of most vegetable gardening books without being told to dig something. You disagree, how do you avoid using your spade? Well, obviously you have to dig to get rid of perennial weeds, to plant things, and to harvest potatoes and other root crops. But once your soil is "clean", there is no need for systematic digging. If you mulch with compost or manure, or whatever you're using to feed the soil, the worms will dig it in for you. A lively soil, with lots of worms and organic matter has excellent structure already — it’s like a sponge where water can be absorbed, and where roots can easily travel. If you dig, you are trashing all that, and disrupting all the minute communities of soil organisms. I think it would be fair to say you're more widely known as an ornamental gardener but you also have a passion for growing your own food. How important is it to be able to produce food from your garden? There is something elemental and wonderful about raising food that is going to nourish your body. I mean, we're terrifically lucky that sustenance is so readily and cheaply available in supermarkets, but we take it for granted. When you raise your own dinner, you connect with the earth and all its cycles. I know, that sounds a bit corny, but so much of gardening (for me, anyway) is about being part of a bigger picture. Not everyone has the space, the energy or the time to get into serious food production. My own food-growing operation is quite small. I think everyone should try to grow something, even if it's only a pot of herbs on the window sill. If you had 3 pieces of advice for a budding vegetable gardener what would they be? 1. Start small: or at least match your plot to your time and energy. If you bite off more than you can chew, it can be disappointing when you can't keep on top of it. 2. Grow what you like. If you don't like cabbage, don't be tempted by the free packet of cabbage seeds on the front of the gardening magazine. I grow the pretty Cavalo Nero kale, because I love the way it looks. But I really don't like kale, so not much of it gets eaten. 3. Just do it. Don't be afraid to make mistakes. But use your noggin too. If something doesn't work, or if something is a wild success, there's a reason. A good gardener is always questioning and always learning. Everyone has their favourite crops and varieties. Who are the star performers in your vegetable garden? 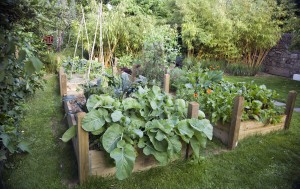 I grow loads of chillies in our conservatory. They do really well in the hot environment, provided they get enough water. And I'm mad about tomatoes. We have them in the greenhouse, but I have room for only 6 or 8 plants each year. I'm love a larger greenhouse, or the space for a polytunnel. In my veg beds the crops vary, but I always have runner beans: I freeze or pickle the excess. We grow all kinds of salad leaves. In the off-peak season it's nice to have a few leaves of oriental mustard or American land-cress to add to bought-in lettuce. My all-time favourite vegetable is purple sprouting broccoli. I grow it every year. I prefer it to asparagus, seakale or any other posh crop.