This Friday I thought we'd continue looking at pollinators as we had such a good response from our first 'Friday Facts' on solitary bees. Solitary bees tend to be overlooked in favour of honey bees, the same can be said for other important (and fascinating) pollinators of which there are many. This week it's the turn of the hoverfly. 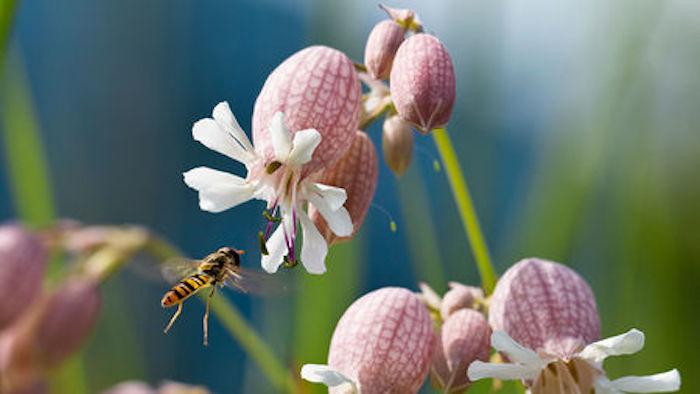 There are around 250 different hoverfly species in the U.K. and Ireland, they are important pollinators but are also very valuable as natural pest control as the larvae of many species feed on aphids. Some hoverflies are migratory (like the marmalade fly above) with huge numbers crossing from mainland Europe in the summer months. It is interesting that hoverfly numbers have not declined to the same extent as the solitary bee, this is thought to be because of their ability to travel long distances to find a suitable habitat. This trait makes them even more important as key pollinators when other beneficial insects are in decline. 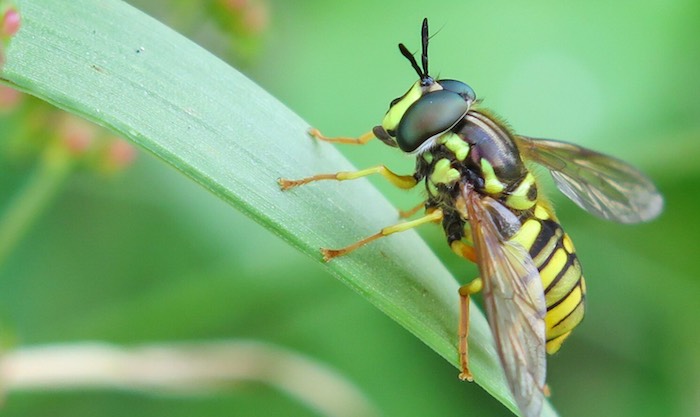 Hoverflies are mimics Hoverflies are also interesting as they are mimics and imitate wasps or bees in order to avoid being eaten by other predators. Hoverflies differ from the real thing in a number of ways including their lack of sting, a single pair of wings (bees and wasps have two pairs), short antenna and large, compound eyes like a housefly. In the case of wasp mimics the hoverfly version also tends to be noticeably smaller than a real wasp. 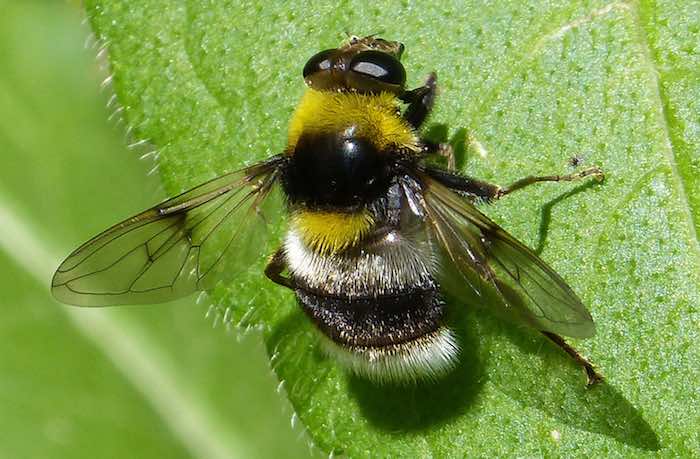 Aphid Control As we've mentioned hoverflies are very important for controlling aphids (greenfly etc) so are very useful to have around the garden. A female will adjust the number of eggs she lays dependent on how many aphids there are around for her larvae to feast on. She knows this by detecting distress pheromones given off by plants under aphid attack. Everyone's a winner as the plant gets help with its aphid problem while the fly ensures her offspring are well fed. N.B. just as hoverflies cheat death pretending to be wasps or bees, they are not the only ones playing games. The orchid 'Epipactis veratrifolia' mimics the alarm pheremones of aphids in order to attract hoverflies to do their pollination for them, it's a huge web of wildlife deceit! 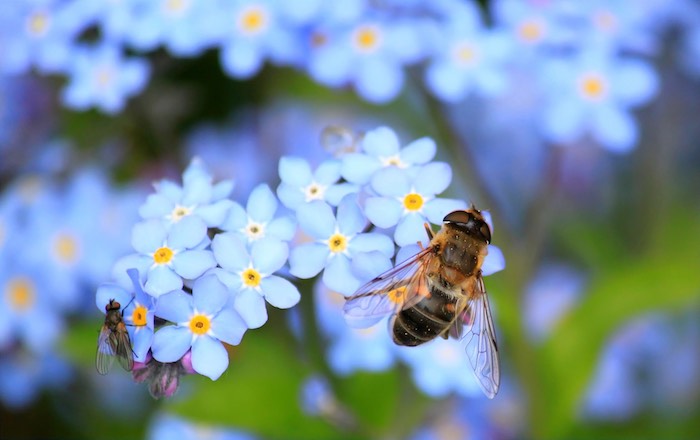 Pollinator Importance As per the introduction, hoverflies tend to be overlooked in favour of the more media friendly bee but are, in fact, the second most important pollinator after wild bees. Bees are capable of carrying more pollen per plant visit but hoverflies more than make up for this from the number of plant visits they make and the area they are able to cover. As regards plant species that attract hoverflies, they are generally a lot less choosy than bees so pollinate a very wide range of plant species. Because most hoverfly species have short mouth parts (unlike the long proboscis of many bees and moths) they tend to favour small open flowers where the goodies are easier to get at. 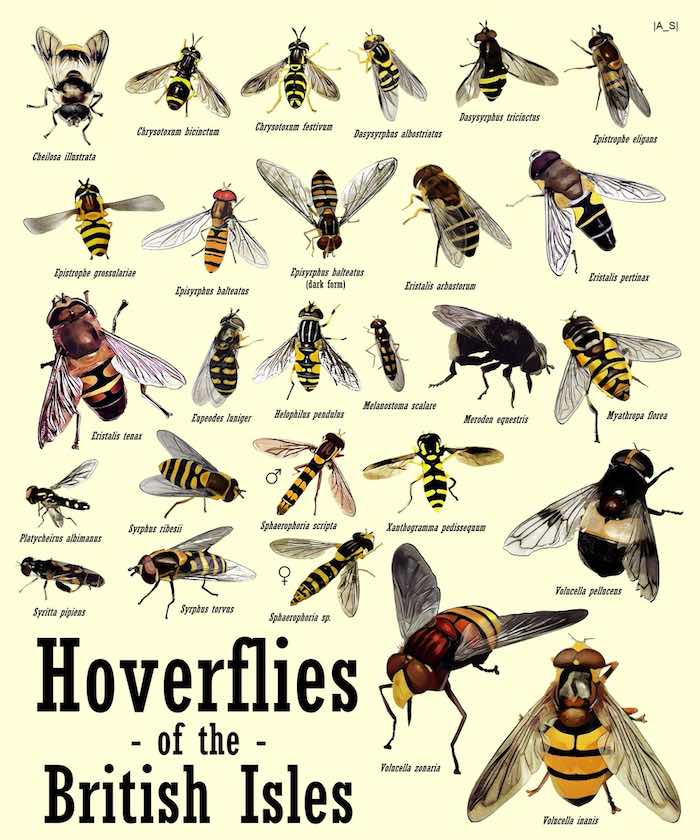 Attracting hoverflies to your garden Unlike Donald Trump, hoverflies don't have big mouths so their favourite blooms will be small, especially flowers with heads made up of multiple small blooms like those in the cow parsley (umbellifer) family. This family includes perennials like Astrantias and Eryngiums or annuals like Orlaya, Ammi or Bupleurum. Hoverflies are also fans of the daisy family so will like Aster, Cosmos and Calendula and also absolutely love hardy geraniums particularly 'Rozanne'. From a vegetable gardeners perspective (and I speak for experience on this one), fennel, dill and coriander flowers are very popular as are fruit blossoms. 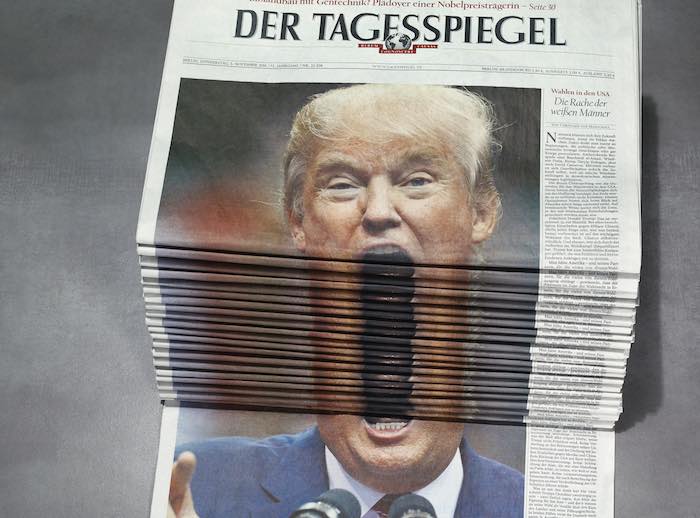 That's it for today. I'll be working more on pollinator plant selections and improving our range of important pollinator plants, I'll keep you posted on new developments as they arise. I include above some common hoverfly species above including bee and wasp mimics if you fancy doing some spotting in your garden. If you'd like to go into more detail there is an excellent guide to identifying Irish species from the National Biodiversity Data Centre which you can read by clicking the link below. Thank you for reading our mail, I'll see you next week! Andrew