As you may know I keep in touch with Dermot Carey (ex head gardener at Lissadell House) and like to hear about the projects he is working on in his travels around the country. Dermot works as a consultant to a number of growing enterprises which have included Lisadell House, Harry's bar in inishowen, The Mount Falcon hotel as well as the G.I.Y (grow it yourself) movement in Waterford. This Summer Dermot started work at Burtown house and gardens in Athy, Co. Kildare where he has ramped up production in the vegetable garden to provide for their new Green Barn restaurant (pictured below). 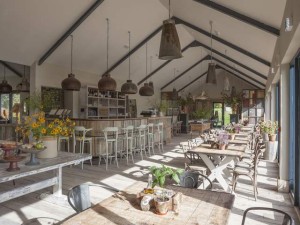 The late Summer opening of the Green Barn has proved such a success that Dermot needs to expand from the confines of the beautiful Quaker walled garden (open to the public) into a nearby field. The restaurant is supplied almost exclusively from the garden and offers the freshest of fare (usually picked that morning) making it one of the shortest journeys from 'farm to fork' in the country. You can view the beautiful Burtown House if you would like to learn more about the Green Barn, house and gardens. The idea of the Burtown diary is to give you a peek into the growing side of an enterprise which includes a period house, a period ornamental and kitchen garden and an onsite organic restaurant. I think how Dermot manages the garden will be interesting but it will also be great to see how the Green Barn prepares the seasonal produce. I sometimes think that is the missing link with new growers; knowing what to do with some of the stuff you grow (which can be just as daunting as growing it in the first place). I figure the best way for me to write these pieces is in a Q+A format as this is how I get the information in the first place. The plan is to call Dermot on a Wednesday evening and ask him what he's up to, I then fire a volley of intelligent, perfectly honed questions and scribble down his replies. I have taken the liberty of tidying my notes to get it all in order but below is pretty much the conversation we had, I hope you find it helpful: 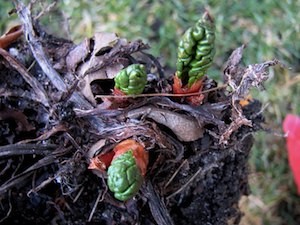 So Dermot, I hear you have been dividing rhubarb this week? Yes, the first task for the year for me is usually dividing and re-planting rhubarb which is a job I enjoy so a good start to the season. Rhubarb is also one of my favourites because you get a such big return from a relatively small amount of work. Once planted all you need to do is give an annual dressing of manure for weekly harvests from late March until the end of July for at least 10 years. Rhubarb is also a good weed suppressant with its large leaves so requires very little maintenance for the year. 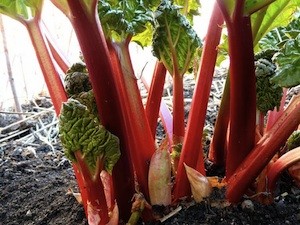 Are there any varieties that you recommend? The plants I'm dividing at Burtown are Timperely early which I like because they give an early harvest from around St.Patrick's day. If you want a longer season you could plant a mix and include later varieties like 'Glaskins's Perpetual' or 'Pink Champagne' which are both very good. I must say I am not a big fan of the common 'Victoria' variety as the stems are pale green and don't have the characteristic pink I think rhubarb should have. Also, Victoria tends to run to seed easily which you don't want as it takes valuable energy away from the plant. What is dividing rhubarb and when do we do it? Dividing rhubarb is basically splitting the root ball or 'crown' in two and using one half to start new plants. The parent plant needs to be well established before you divide them so they need to be growing for at least 3 years, preferably 5. The plant is divided by simply cutting it in two with a sharp spade and removing one half. I find splitting the crowns a real pleasure as they release a beautiful fresh and fruity rhubarb smell! 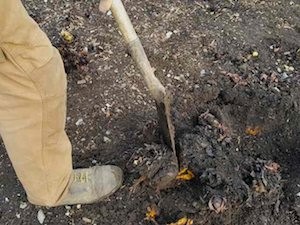 Do you dig a full root and divide it or do you leave half in the ground? A good question. Some people dig the full crown up and divide it but I prefer to leave the parent plant in the ground. I try to avoid disturbing the roots as much as possible, I am removing half the plant but the other half retains it's root system and will recover quickly. New rhubarb crowns should not be harvested for at least a year after planting but if you avoid disturbing the parent plant you will still be able to pick a crop from it for the current season. After removing approximately half of the crown push the earth back in around the parent plant and firm with your hands. I also add about a bucket of well rotted farmyard manure at this stage to feed the plant for the year ahead. There is no need to dig the manure in, just spread it around the plant avoiding placing it directly on top of the new buds. 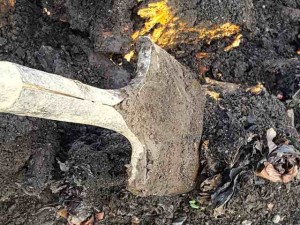 How do I know where to cut the crown? I roughly divide the plant in two. You will see the stump is made up from large buds, try and find a line between the buds and slide a sharp spade in there. Crowns are easy to divide and shouldn't take much effort to push the spade through. The part you remove can usually be subdivided into 3 or 4 new crowns for replanting, it depends how much room you have an how many new plants you want to grow. Separate the root again the same way you did with the original one by dividing the larger buds. Once divided how do I plant the new crowns? I should mention site first as I often see struggling rhubarb plants in the wrong place that end up as disappointments for the gardener. I think because many gardening books talk about planting rhubarb in an out of the way corner (because it remains in the same place so isn't part of annual crop rotation) plants are often placed in shaded areas. Rhubarb needs an open, sunny site to thrive and will not like shady spots especially near trees where plants need to compete for light and nutrients. You must also remember rhubarb needs moist ground so you should never let the soil dry out, I recommend mulching around the plants to help retain moisture. 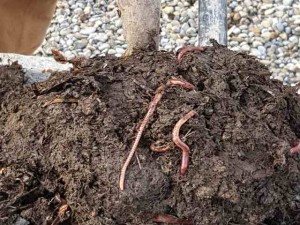 Rhubarb also needs a fertile garden soil as it is a demanding plant so the planting area may need to be further enriched with well rotted manure. I am lucky at Burtown to have a good supply of cow manure (you can see plenty of fat composting worms in the pile I was using!) but you can also use a good quality poultry manure pellet like Quickcrop's Seafeed. Bear in mind rhubarb has an extensive root system so manure needs to be spread over a wider area than you might think. I plant rhubarb in a staggered pattern with 1 meter (approx 3 ft) between plants and between rows, any closer and growth will be restricted. 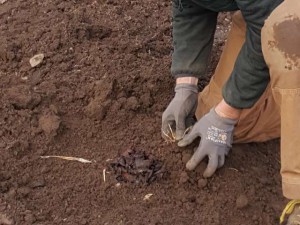 Like strawberry plants rhubarb needs to be planted with the soil at the same level as the original plant. Like the parent keep the buds above the soil level while you firm in the soil around the root. After planting I apply a top dressing of well rotted manure, about a bucket full applied in the same manner as with the parent plant. Do I need to protect the new crowns after planting? There is very little maintenance required other than keeping on top of weeds before the plants grow large enough to shade most of them out. Rhubarb is originally from Siberia so won't be bothered by frost but they do like a moist soil so, again, keeping the surrounding soil covered with a mulch is a good idea. 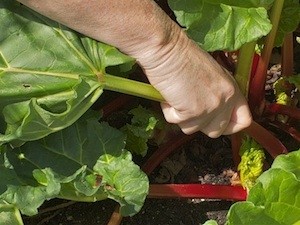 How and when do I harvest rhubarb stalks? As we've said the parent crown can be harvested in the current year but pick smaller amounts to give the plants a chance to recover. On a well producing plant I would normally expect to pick 3 or 4 stalks every week from Spring to late Summer so for a recently divided parent maybe pick 1 or 2. For newly planted 'child' plants do not harvest for the first year and then harvest lightly (as above) for year 2. The best harvest time is for the three months from mid March until early Summer as after this time flavour and quality will deteriorate. Pick stems with a quick tug, they should snap off easily and don't need to be harvested with a knife. Pull the larger stems when they are 2ft long and leave the smaller stems to grow on. The leaves of the plant are poisonous (they contain oxalic acid), it is fine to compost them but don't give them to your Guinea Pig! 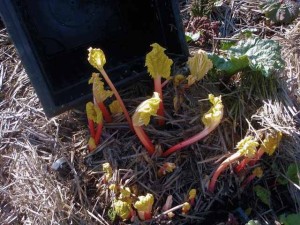 I have seen rhubarb growing under large pots of bins, what is this all about? Yes, you will see rhubarb covered in Spring to exclude the light, the process is called 'blanching' or 'forcing' and results in stalks with a brighter magenta colour which are more tender than those grown in daylight. The process is the same as when a seedling gets leggy due to insufficient light, the stems grow fast to try to find light as quickly as possible. As there is no light allowing the leaves to make sugars (from photosynthesis) all the energy needs to come from the root which is tough on the plant. Personally I don't bother blanching myself, I am not sure there is much difference in flavour and I don't like putting the plants under stress. 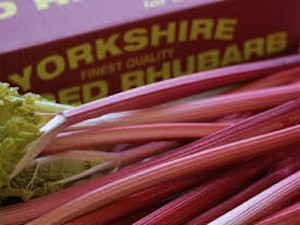 Forcing rhubarb is not as popular now as it was in the late 19th Century when the choice of fruit was more limited. At that time West Yorkshire produced 90% of the World's forced rhubarb in an area known as the rhubarb triangle and even had a 'Rhubarb Express' rail service to carry 200 tonnes of stems to market every day! The plants were forced in huge heated sheds with all light excluded and harvesting was done by candlelight so as not to stop the fast growth. Any other tips on growing? No, that's about it. Feed it in the Spring with manure and keep the ground around the plants mulched and you can't go far wrong. Rhubarb is one of the most trouble free crops you can grow and one I highly recommend for any garden.