Can potato plants with late blight be composted? If care is taken the answer is yes. Blight spores can only survive on living plant tissue, once the foliage has been cut it will die and so will the blight pathogen. Potato tubers, on the other hand, are still alive so can harbour the disease. Potato roots will have some tiny potatoes still attached despite your best efforts so it is best to only compost the stems cut from above ground level and discard the roots and any blighted potatoes away from the garden. Any 'volunteer' potato plants which grow from the compost pile should be destroyed as there is a risk they will spread the disease if the tubers they grew from were infected. 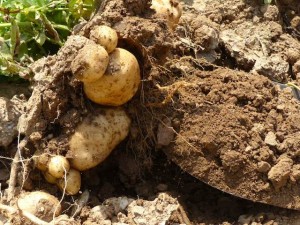 Do I need to treat the soil in any way to prevent late blight from developing next year? No. The late blight pathogen is an obligate pathogen meaning it requires living plant tissue to survive overwinter. Once the potato plant tissue is dead the disease cannot survive on the plant debris unlike other vegetable pathogens which can survive on decomposing foliage. Late blight does have a soil borne overwintering survival mechanism called an oospore which is the result of 2 strains of blight mating. There have been no conclusive instances of mating strains producing oospores in Ireland and the UK thus far though they have been observed in the Netherlands and Scandinavia. It is highly unlikely oospores will be an issue in your garden but practicing good crop rotation will minimize any risk. 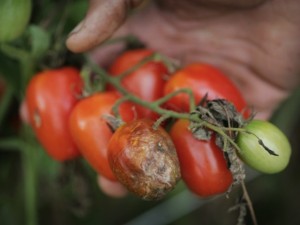 Can I compost tomato plants or fruit affected with blight? Yes, tomato plants can be composted in the same way as potato foliage as the pathogen is the same and can't survive on dead plant material. It is also fine to compost any tomato fruit affected by blight as the disease is unable to enter the tomato seed and can't survive on the outside. The tomato fruit itself is dead so is treated in the same way as the foliage. It is unwise to use seed for the following year from any diseased plants as other pathogens can survive on the outside of the seed and can infect the new crop. Could the late blight pathogen survive on tools, gloves or other garden implements? No, as tools and other garden implements are not living things infection cannot be spread this way.