I was pleased to bump into writer and journalist Fionnuala Fallon recently as I wanted to compliment her on her new book 'From the Ground Up'. I'm a sucker for good photography and also a bit of a nosy parker so this beautiful book ticked all the boxes for me. Fionnula's photographer husband Richard Johnston provides the glorious images while Fionnuala takes a very in depth, behind the scenes look at some of Ireland's most interesting gardens and gardeners. There are some real pro's here with authors like Joy Larcom and Klaus Laitenberger but also some very interesting projects including a brilliant school project in Dublin and a model community garden in Co. Donegal. Ever wondered what ex Green party T.D. Trevor Seargents garden looks like? You'll find this out and plenty more in this sumptuous volume charting Ireland's new love - producing fresh and fabulous homegrown food. Fionnuala has also kindly agreed to give us an interview and tells us where her passion for gardening stemmed from as well as her views on the future of vegetable growing on this fantastic island of ours. 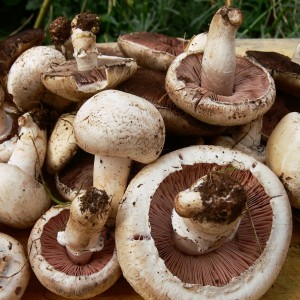 It seems very common that a person's interest for growing stems from childhood experiences in the garden, is this the case with your own passion for plants? I can't remember a time when I didn't enjoy gardening but it was certainly encouraged by my mum who was, and still is, a very passionate kitchen gardener. In fact one of my earliest childhood memories is of her poring over this very well-thumbed copy of Rodale's 'Basic Book of Organic Gardening', while she worked out planting plans each spring. She and my father brought my siblings and I blackberrying, mushroom-hunting, and fraughan-hunting up in the Wicklow mountains in late summer. I think that childhood experiences like that leave you with a lifelong love of nature. I've always wondered why the ornamental flowering garden and vegetable plot have to be so separate and feel you should always be only a few steps away from a snack. As a garden designer how do you feel about mixing the two disciplines? Excited. I think that over the last number of decades, garden writers like Joy Larkcom and the late Rosemary Verey of Barnsley House have already done a huge amount in terms of popularising the concept of the ornamental potager and in proving the fact that all gardens, even the tiniest plot, can be both beautiful and productive. More recently, community-based projects like that at Todmorden in the UK have shown how conventional outdoor public spaces can be re-imagined. For example, by the simple act of planting fruit trees in a public park, rather than a species that's purely ornamental. All it asks for is a small but fundamental shift in attitude. 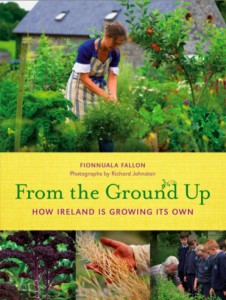 Your new book 'From the Ground Up' has a wonderful mix of very different gardens from around the country and appears the most fantastic journey for any gardener. You must have really enjoyed making this book? We spent most of the summer and early autumn of 2010 travelling to kitchen gardens, allotments and smallholdings all over the country- Dublin, Cork, Leitrim, Donegal, Waterford, Laois, Clare and Mayo. I used to joke to my husband Richard, who took all the photos for the book, that it was our version of Jack Kerouac's 'On The Road'. Most of the time we had our twin baby sons with us so when we weren't driving, interviewing or photographing, we were changing nappies or making bottles. The only time they misbehaved was while we were visiting Trevor Sargent's town garden- luckily for us, Trevor didn't mind. 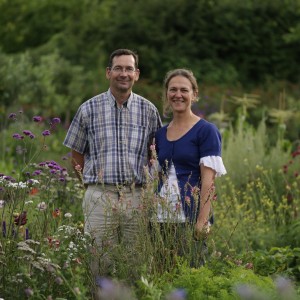 I hugely enjoyed visiting everyone of the sixteen gardens featured in 'From The Ground Up' , while I found it endlessly fascinating to see the variety of ways in which people garden. For example seaside kitchen gardens like those of Michael Viney or Joy Larkcom are hugely shaped by the elements- fierce salty winds, violent gales and sudden storms- while lack of space and light is the determining factor in Adam and Susan Bermingham's tiny Dublin balcony garden. But whichever the garden, there was something remarkable and genuinely uplifting about all of them. I'll never forget, for example, watching the community gardeners at work together in 'Glor Na Mara' in Bundoran, or seeing at first-hand the Clare market gardener Jim Cronin's remarkable relationship with his two purebred Percheron farmhorses, Qualite and Quaroba. But while visiting the gardens was an unforgettable experience , I'd be lying if I said that writing the book was quite as enjoyable. It seemed to take forever to finish, a bit like climbing a mountain and never reaching the top. Except that eventually (phew...) I did. The interest in 'Grow Your Own' seems set to continue with more and more people wanting to get involved. Do you think the economic situation has much to do with this rise in popularity or are people just getting more interested in the quality of the food they eat? Both, but more so the latter. At the beginning of the chapter in my book on the Michelin-starred chef Martijn Kajuiter in County Waterford, I quote Francis Moore Lappe, the author of 'Diet for a Small Planet', where she says that "the act of putting into your mouth what the earth has grown is perhaps our most immediate interaction with the earth.' For me, those words pretty much sum up the pleasures and importance of growing at least some of your own food. 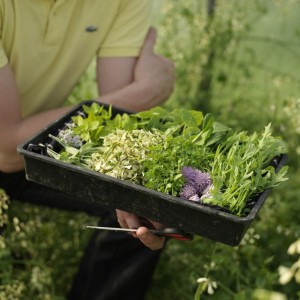 You include the Cliff House Hotel in your book as an example of a hotel growing its own produce, this seems like an exciting input to our restaurant industry. Is this becoming more common in Ireland? It was really interesting to see how someone like Martijn, who grew up in the Netherlands and worked alongside some of Holland and the UK's top chefs including Henk Savelberg and Marco Pierre White, has such a great respect for Irish-produced, locally sourced, seasonal ingredients. It really drove home to me the fact that for so many years as a nation, the Irish have had a tendency to undervalue their native food culture. But places like Ballymaloe have gradually done a lot to change that. In her first cookbook which was first published back in the 1970s, Myrtle Allen sang the praises of simple, fresh, homegrown produce and people began to take notice. Now you see more and more wonderful restaurants like The Glebe in West Cork or Harry's Bar up in the Inishowen peninula in County Donegal where the link between the kitchen garden and the restaurant kitchen is an immediate one, and one that's absolutely fundamental to the success of the business. It's radically changing the nature of the Irish restaurant industry, in the very best possible way. 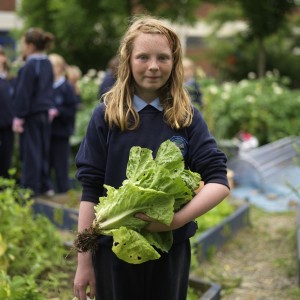 The schools project with 'Holy Trinity School' looks fantastic. Does teaching children to grow really have a lasting impact on their relationship with food? I really do think so. The thing is that school kitchen gardens like that of Holy Trinity School don't 'teach' children in the formal, traditional sense of the word but rather they allow them to learn, to explore and to investigate, in the process of which they acquire a real interest in food and where it comes from. Pair that with some cooking skills, as Holy Trinity's principal Jerry Grogan has done with his pupils, and you've created what he called 'a legacy for the future'- a love of good food. I found myself getting quite sentimental about our beautiful Island looking through the photos in the book, it seems we have such a great opportunity to become known as a nation of quality food producers. Do you see growing your own as having potential far greater than just a hobby? I think that's happening all around the country. In the book, Martijn Kajuiter discusses the fact that not only does he grow a lot of fresh produce for the Cliff House restaurant in partnership with nearby St Raphael's gardens, but he also sources produce from a wonderful variety of local growers- apples and apple juice from Julia Keane, strawberries and pears from a local grower he knows only as 'Strawberry Willy' as well as many other different kinds of fresh fruit and vegetables- rhubarb, carrots, parsnips, potatoes, cauliflowers- grown by local farmers and stocked in 'The Country Store' in nearby Dungarvan. He describes the shop's owner, Conor Lannen, as 'the spider in the web' in that he's going to all these fantastic growers and farmers and inviting them to sell their produce in his shop. It's a great model for how small market gardening can be supported at a local level. Jim Cronin would be another example. But the challenge for growers is in encouraging more Irish people to place a value on locally-grown, seasonal food, rather than cheap imports. 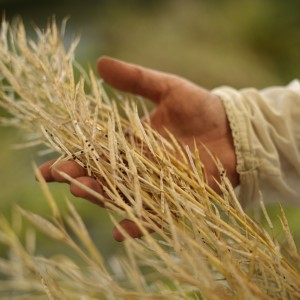 Did you come back with many new discoveries of unusual varieties or methods of growing from visiting so many of Irelands' expert growers? Absolutely. For example I learnt a lot about seed saving techniques such as fermentation, threshing and winnowing from my visit to Madeline McKeever of Brown Envelope seeds, as well as which vegetable seeds are difficult to harvest succesfully and which are easy. Jim Cronin taught me about the importance of crop rotation, successional sowing and how to preserve soil fertility. Tanguy de Toulgoet, whose Laois potager also features in the book, is another immensely knowledgeable and unconventional gardener with strong opinions on the importance of preserving soil health, and who gardens using what's called the biointensive system. His hugely productive garden was full of unusual varieties that I'd never heard of and which he prizes for their tastiness- heirloom tomato varieties like 'Cornue de Andes' and 'Principe de Borghese'. He also showed me how to grow a pear in a bottle to make pear liqueur- definitely something I'll be trying in the future.