A Protective Seaweed Mulch I took the opposite photo in early January, it's frosty seaweed obviously but it's in my garden rather than on the beach. I prepared most of my beds in December (even then a little late, early Autumn is best) with a hefty top dressing to protect from the bad weather and to make sure the worms and microbial life in my soil weren't twiddling their thumbs all Winter. It's the life in the soil that processes the organic matter and releases the nutrients that feed your plants so feeding the soil should be rule number 1 of vegetable gardening. Last year I added plenty of manure and compost but this year I've really gone to town: 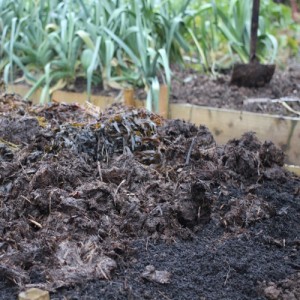 I have built up layers of Envirogrind (1/2 barrow per sq. metre) rotted farmyard manure (1/2 barrow per sq. metre) and fresh seaweed (1 barrow per sq. metre). You can just about see the original soil in the bottom right corner of the photo, then black Envirogrind, bulky lumps of manure and finally seaweed on the left. As you may know I'm going for 'No Dig' so I just layered all this on top rather than digging it in. The seaweed is now rotting down nicely with a layer of gooey mush underneath which worms, for some reason, seem to absolutely love. Every cloud has a silver lining I guess and while no one can say they enjoyed the recent storms (apart from the surfers) one benefit is the coast is covered in washed up seaweed. Seaweed is better used fresh as it looses it's nutrients very quickly so best picked soon after a storm. Don't worry about the salt as it contains very little and won't harm your soil, rummage under a rotting pile of seaweed you'll find lots of worms who wouldn't be there if the ground was too salty. I don't know if 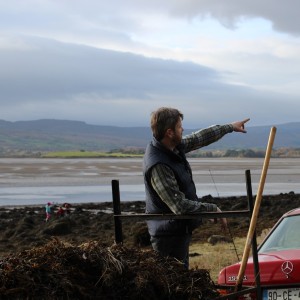 it's illegal to collect it, it is to cut it which is fair enough but the stuff on the beach is fair game as far as I'm concerned. Here's Niall on one of our seaweed gathering expeditions pointing out possible escape routes should we get 'disturbed' by the law. Seaweed & Potatoes Potatoes are particularly fond of seaweed. The population explosion on Ireland's West coast before the famine was pretty much based on the link between potatoes and seaweed where soils were 'built' over generations using seaweed, sand and manure. I have seen potato plants growing in piles of seaweed alone and still produce very good yields so this year I'm keen to do some experiments in my own garden. I'd love to explain exactly why seaweed is so good for potatoes and plants in general but like a magician it seems reluctant to reveal its secrets. I spoke to Stephen Casburn of 'Sea Nymph' this morning (he supplies us with our Irish seaweed liquid feeds) and he explained it as follows: 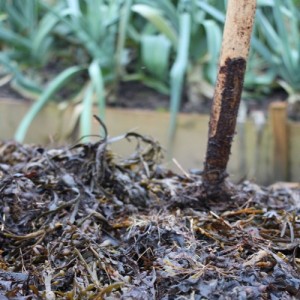 Seaweed is a balanced source of 58 trace elements, growth hormones, nutrients and fungal and disease preventatives. Essentially it's a multi vitamin for plants. Your garden soil only has room for a fixed amount of elements so if you have too much of one thing, like iron for example, you will push out others and make them unavailable for plants. The beauty of seaweed is it is a balanced source of a broad range of elements which is released slowly so won't overwhelm your soil. Seaweed also stimulates the good bacteria in the soil which process nitrogen and make it available to your plants. It also seems to bolster the plants immune system making them more able to resist attack from pests and diseases. There is still a lot we don't know about seaweed as the benefits seem to outweigh the measurable components. It's about the sum of the parts, it's a balanced bit of everything which seems to create that little bit of magic. But back to the potatoes: Lazy Beds Dermot Carey had shown me how to create lazy beds in the traditional way by making ridges of seaweed and folding a flap of inverted turf over the top. My vegetable garden is all in raised beds so I can't try it there but I do have a bit of a field where I'll give it a go. I include a diagram below: 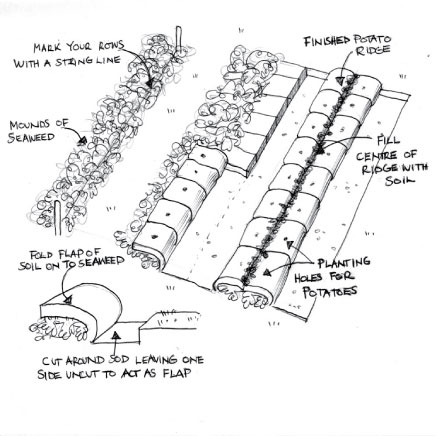 It's a bit of a shame to call it a lazy bed because it's pretty clever really and doesn't exactly build itself! The idea is to make a seaweed filled sandwich between sods of grass.  Here's what you do: The seaweed sandwiched between the sods will provide a little bit of heat as it rots down which is helpful to get the plants off to a good start in early Spring. The grass above and below the provides nitrogen which will be broken down by the soil bacteria which are in turn fed by the seaweed, good eh? I'm going to add a note of caution of my own here (even though I haven't actually tried it yet): if your soil is a heavy clay I'm not sure if this will work so well as air may be cut off from the seaweed which will take longer to rot. 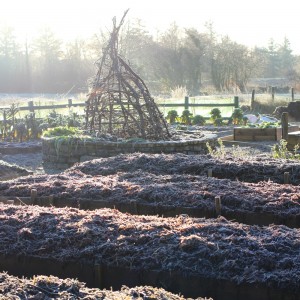 Seaweed mulch As I said my vegetable garden is all raised beds (it was very wet) so the lazy bed method can't be applied. I'm keen to use seaweed here too though so my plan is to plant all my potatoes a little shallower than normal and use seaweed as a mulch to earth up instead of dragging soil up around the plants. I'll do half and half on the beds and compare the yields and will let you know how I get on. I figure the seaweed on the surface will break down nicely over the Summer not only feeding the potatoes but also improving the soil for a quick follow on crop in the Autumn. It's free, you might as well use it. I get a real kick out of using natural inputs to improve my soil, seaweed is plentiful around our Island, it's free and has so many advantages it's a real shame not to use it. You will build the most fabulous garden soil by adding seaweed every year without damaging the environment by adding artificial fertilisers just as Irish coastal farmers did for generations. Remember to get it as quickly as possible after a storm for the most benefit and please don't cut it from the rocks as you will get in trouble with the boys in blue.