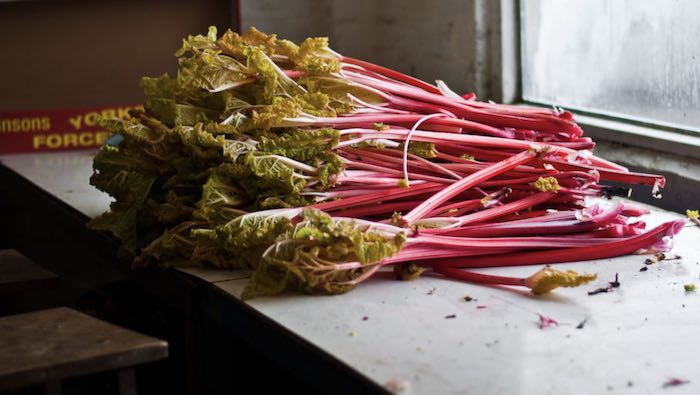 Rhubarb is a very easy plant to grow. If you get the conditions right at the start it will be relatively trouble free for many years. It is a plant that looks fantastic in the vegetable garden with its large leaves and striking red or greenish stems. It also gives you a sweet and tasty treat when there is little else to harvest. Rhubarb stalks can be eaten raw, but the crop is mostly consumed in the same kind of way as a fruit. It is often used in desserts such as pies or crumbles. Try it as a nutritious topping for porridge. Rhubarb is rich in fibre and antioxidants, in particular anthocyanins which give it its red colour. In Asia, rhubarb is used as a traditional medicine.

We stock 3 of our favourite varieties which can be easily ordered below, with more information on our ‘rhubarb varieties’ blog post. So, here we go:

Site and soil Rhubarb needs to be planted in full sun, but it will tolerate partial shade in a warm garden. Partial shade does not mean a corner of the garden that gets a couple of hours of sun in the morning. I would advise a spot with at least 6 hours of sunshine per day, so keep an eye on the garden for a few days to find the best spot to plant. You also need to be aware that your rhubarb plant will be in the same spot for 10 years, as it will not like to be moved. Rhubarb has an extensive root system so you shouldn't dig around the plant. Choose your site well and leave it alone! When choosing your final position, take into account that a medium sized plant will be 4 foot or more in diameter. 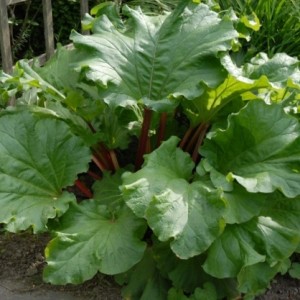 Rhubarb benefits from a well drained soil and will not thrive in wet soil. If your garden is on the damp side we recommend growing in raised beds. Dig in plenty of organic matter (such as rotted manure) about 4 weeks before planting time and give it time to settle. Remember the plant won't like to be moved - so you're adding as much nutrient-rich material as you can to keep it going over a long period. If you need a good source of organic nutrient-rich compost, we highly recommend our soil improver - sold in 25 kg or tonne bags.

When to plant It's much easier - and more productive - to grow rhubarb from crowns (divided plants) rather than seed. Growing from seed can result in plants which aren't true to the parent variety, while the crowns are essentially clones of the parent plant. The best time to put them in is late Autumn to early Winter. November - December is perfect. 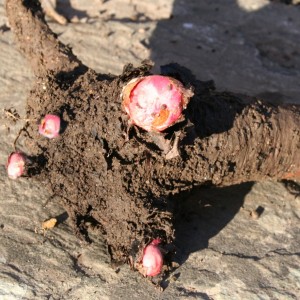 How to plant Make sure you get your Rhubarb plants from a reputable supplier to ensure they are disease free. Dig a planting hole a little wider than the rhubarb crown in your prepared bed. Plant the crown with the growing tip approx 2.5 cm below the surface of the soil. Using your fingers, firm the soil well around the roots to get a good seal and to remove any pockets of air. If the weather is unusually dry when planting, water well to help establish the plant. Spread a compost mulch around the plant, but don’t spread it directly above the growing tip, which will come up in approx 4 weeks.

Crop Care Rhubarb plants require very little care and will produce for you even if you just leave them alone and ignore them. Having said that, a bit of extra care and attention can increase your yield and produce a better quality stem. 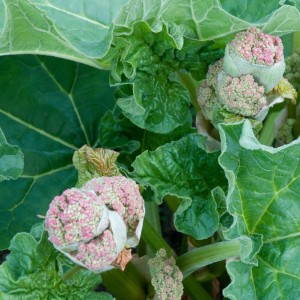 At the end of the growing season, give your plants a good feed. Use a top dressing of well rotted garden compost, making sure you don't pile it up around the stems. Keep the area around the plant free of weeds, which will compete with the rhubarb. Give an occasional good soaking in prolonged dry periods.

Flower heads may appear in early Spring and these should be removed quickly to stop the plant producing seed. If this happens, your rhubarb will be significantly weakened and will be unlikely to recover to full strength. Remove the flower stalks with a small knife and cut them as close as you can to the main plant.

Rhubarb suffers from very few pests and diseases with the only problem you may encounter being crown rot. Crown rot can be avoided by planting in well drained soil and being careful not to bury the growing tips under compost. Basically if you do as I've suggested in the previous paragraphs you should be o.k.!

Harvesting Rhubarb It's not recommended to harvest any stems in the first year, no matter how proud and excited you are about your new addition. This will weaken the plant, which needs a full first year of growth to establish a strong root system. It will need all its foliage to do this. 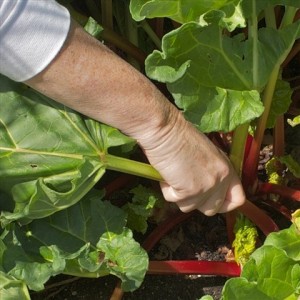 In the second year you can pick some of the stems, 2 per plant is good making sure you leave at least 5 strong ones to grow on. In subsequent years you cab pull 3 or 4 stems at a time making sure you leave about the same number. Rhubarb will produce stems fro May until July giving you 2-3 pickings from each crown.

Remove the largest stems when picking, waiting until the leaves have fully opened. Pull gently from the base of the plant while applying a slight twisting motion. Remember the leaves contain high amounts of oxalic acid and are poisonous to eat. They are also toxic to cats, dogs and other pets. It can, however, be safely composted with the rest of your garden waste. 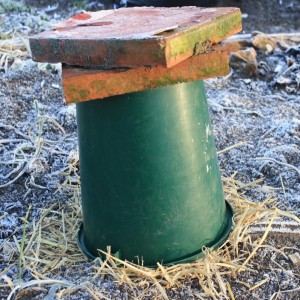 Forcing Rhubarb You can get an earlier and sweeter crop of rhubarb by a process known as ‘forcing’. The idea is to exclude light and keep the plant slightly warmer than outside temperatures making the rhubarb grow faster and therefore give you an earlier crop. We tend to grow 'Timperley Early' as this gives a very early crop without the need for forcing. Forcing is fun to do though, and some people will tell you the end result is sweeter. Did you know West Yorkshire once produced 90% of the world’s winter forced Rhubarb? Pickers harvested by candlelight. The area in question has become known as the ‘rhubarb triangle’.

Start forcing rhubarb in January for best results. Remove any dead leaves or weeds from around the crown to make sure they don't cause rot. You can add a layer of straw or shredded newspaper to warm the emerging shoots and to protect them from frost. Cover the crown with an inverted dustbin or a large pot, making sure all light is excluded. A dark coloured bucket will absorb more heat and will warm better. The rhubarb should be ready for harvesting 8 weeks or so later - or when the pressure of the stalks pushes the bucket off.