Timetable for growing tomatoes: a summary of a decade of learning I started growing tomatoes in the wet summer of 2009 and was quite frankly, not very successful. It probably took me until 2013 to know what I was doing, when I had a breakthrough season, benefiting greatly from a hot, sunny July and a Shirley plant which yielded well over 100 tomatoes grown in a pot out of doors. It was then that I realised that formulaic advice was just that and that personal experience should always trump generic advice lacking context. Since 2013 I have worked on understanding the holistic life cycle of a tomato from seed to composting the haulms in the autumn, trying to align any interventions to the needs of the plant as it grows. I evaluated around a dozen strains of tomato for suitability for growing in pots outdoors and have also grown about six in soil, identifying two or three well suited to that here in NW London. 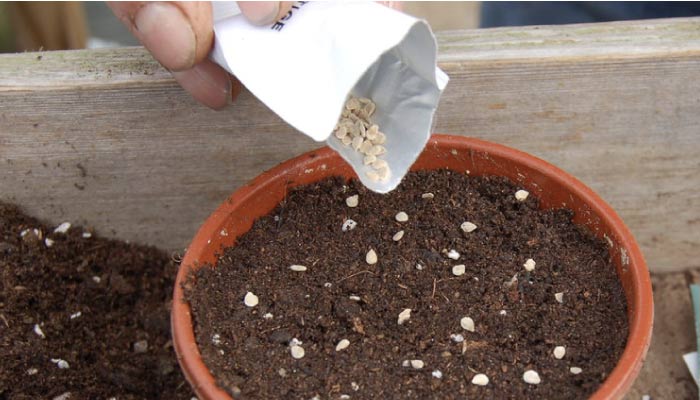 I have learned to save good tomato seeds and they routinely germinate now within 3-6 days of sowing. Particularly good years for saving like 2014 are still germinating and growing beautifully six years on. I have won plenty of prizes for tomatoes at local shows but showing tomatoes is different to growing for eating: I grow separate strains for showing and use a Quadgrow to ensure perfect conditions throughout the summer. The majority of plants I grow for eating are mainly grown in 30cm pots and live on an outdoor patio, with a covered carport available to protect them when the rains come. As my garden’s soil has improved through five years of no-dig organic/biodynamic gardening, I have found that tomato crops can be harvested from the soil too. From Seed to Final pot/garden position: working backwards to decide when to sow. I have found in NW London that, in general, it is safe to leave tomatoes outdoors permanently from around 21st May. Of course, some years this can be earlier, but for me, the 30cm pot size is when it becomes impossible to bring the tomatoes indoors at night if cold intervenes, so I do not want them potted up too early into their final homes. 15cm pots can happily live indoors overnight, so even if they go out to enjoy spring sunshine and harden off during the day, they are still usually pampered at night. Having decided I want to do final potting up around 21st May (give or take), I have noticed that plants do not want to stay in 15cm pots for more than 17 days (preferably 14 days), since if they do, they start growing vertically too soon. So I don't really want to be potting up into 15cm pots before May 1st in ideal circumstances. 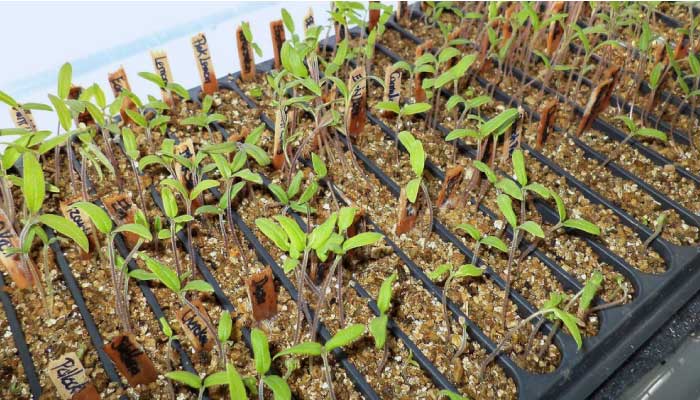 I have also found that 10 day old seedlings transplanted into 8cm pots are ready to be potted on after 3-4 weeks. It varies from year to year, depending how sunny and warm April is (in 2019, we had a week of hot summer sunshine in April and my tomato plants were propelled forward with rocket fuel: I potted on my prize tomatoes to 15cm pots on day 19, a record I doubt I will ever surpass). So transplanting seedlings into 8cm pots from around 8-14th April sounds realistic. Finally, I have found that germinating seeds well means that plants are through between day 3 and day 7 in the main. If they are not, either your seeds are duff or you have not given them a good burst of heat above 20C. So the seeds are ready to transplant into 8cm pots from around day 6 - 10. Based on that a sowing date in the last week of March to the first week of April has proven to be the best for me. The effects of earlier or latter sowing dates Of course, tomatoes can be sown earlier or later for specific reasons. Here are three reasons I may choose different sowing dates for a few plants: Sowing earlier tends to generate more leggy Red Alert plants, but that is the price of early tomatoes. Maskotka plants grow as bushes and tend not to get too leggy, but keeping the plants under-watered in the early weeks is necessary to minimise the legginess of plants. 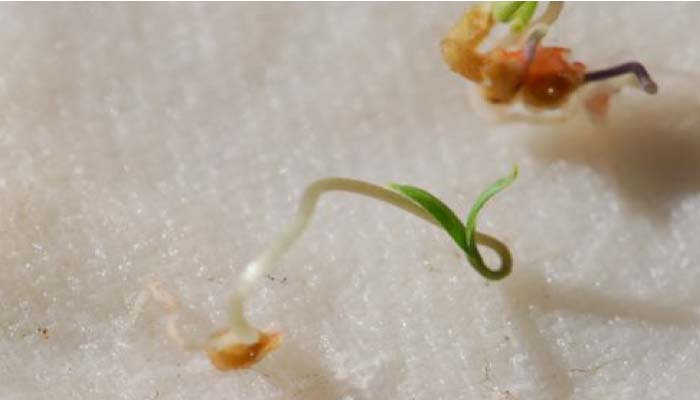 The other thing I do early in the season is to test my new homemade tomato seeds prepared the previous summer. I have just germinated 5 sets of seeds sowing on February 2nd and all of them have come through well or perfectly within 7 days. So although you will be throwinig these seedlings away, if you make your own seeds, February is well worth using to test the viability of your own seed stocks. Sowing later is also possible: I have had great success germinating seeds in late April for plants destined to be planted into soil (Red Alert especially); the very rapidly growing Maskotka strain will give a good crop from early August onward sowing in late April; and if your aim is to get peak tomatoes in mid September to show, then sowing in the first few days of May works very well. My 2020 timetable for my eating tomatoes 1. Sow seeds at moonrise on Friday March 27th (it is around 7am that day, but you can find out exact times for where you live at ​www.timeanddate.com​ ). Alternatively, sow between 4 - 5pm on Sunday April 5th. I have germinated seeds very successfully using Quickcrop’s professional seed compost; using leaf mould on top of garden centre MPC. The seed compost is expensive but I have not had a single failure in three years of using it: the peace of mind is surely worth an extra £15?! Moonrise is a great time to germinate seeds, but obviously seeds will still germinate if you sow them at other times if real life intervenes. 2. Transplant seedlings on April 5th/13th (depending on which sowing date you used) into 8-10cm pots containing MPC with a smidgen of basaltic rock dust, friendly bacteria and friendly fungi added. I have found that most young plants do better with the additions listed above: again, if you do not have them, things will still grow, but they are very cost-effective growth enhancers. 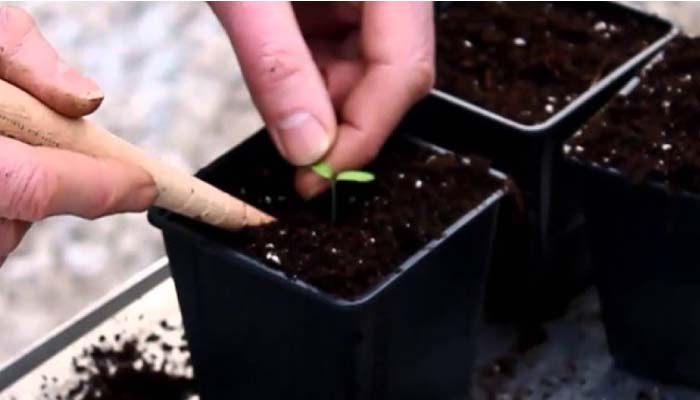 I prick out seedlings indoors, as it is still cool. I then place six pots in a tray and add 600ml of lukewarm water to the tray, allowing the soil to absorb water from underneath. This will usually last for one week, but if unusual heat happens (like in 2019), add more water from below to keep the plants happy. 3. Pot up young plants to 15cm pots on 2nd/3rd or 10th May into MPC. No further additions of fungi and bacteria are necessary. At this stage, I am usually putting plants on a 1sqm tray indoors which will allow watering from underneath: 250-500ml per pot is sufficient, but simply add more water if the plants look like they need more. 4. Final potting up into 30cm pots to occur on 20/21st May or 29/30th May. At this stage, I usually like to add some worm casts into the growth medium, I have found that a rounded teaspoon from my wormery tray really helps plants flower effectively. In addition, adding some crushed eggshells helps to ensure that plants have access to sufficient calcium. It is also important at this stage to add sufficient fertiliser to allow the tomato plants to reach their full potential. I usually use Vitax Q4 organic, but Nutrimate will also do the job. This is probably the most important aspect of getting a good yield, since you need the plants to grow well for 6-8 weeks before starting a regular potassium-based tomato feed. Tending to plants from final potting up until harvest is another story. Perhaps Andrew will be kind enough to let me tell that one later in the year. Happy Tomato Growing in 2020 Rhys Jaggar