'How to grow gooseberries' is intended as a solid introduction to growing this relatively easy to grow fruit bush. For more detailed information on gooseberries please feel free to contact us, we are always delighted to help. 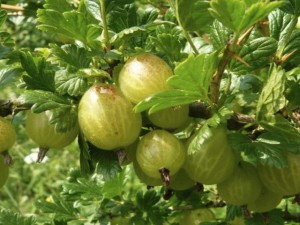 Gooseberries can be seen as a trouble free plant as they will still produce a reasonable amount of fruit even if left unpruned and unfed for many years. If, however, you do take the time to prune and feed your bushes you will be rewarded with a very significant increase the amount of fruit produced. A well tended gooseberry bush will reward you with plentiful harvests of delicious tart berries for making jam, tarts and crumbles or for mixing with cream and making the food of the Gods - gooseberry fool.

The most common way to cultivate gooseberries is to grow as individual bushes but they can also be grown as cordons (trained along a wire) or as a standard (a miniature tree shaped bush on a single tall stem). If you have a warm, South facing wall you can also train plants in a fan shape which will result in a greater number of the sweetest berries but with a lower yield than a bush. 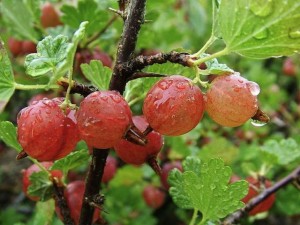 Types of Gooseberry
Homegrown gooseberries are a different animal from those available in the shops which tend to be very tart (and are often sold unripe to make matters worse) and may put some people off. Homegrown berries are far sweeter with a range of taste and colour which makes growing your own a real treat.

There are two main types of gooseberry; the culinary and dessert variety. Culinary varieties have thicker skins and are too tart to be eaten raw; they are used for making jam and require a large amount of sugar to make them palatable to most tastes. Dessert gooseberries are rarely available in the shops; they tend to be red, have a thinner skin and a sweetness and almost floral flavour that will completely surprise you.

I find both delicious but if you only have space for a couple of bushes you are probably best growing dessert varieties and harvesting some unripe fruit in May and June for cooking and leaving the rest to ripen in July. 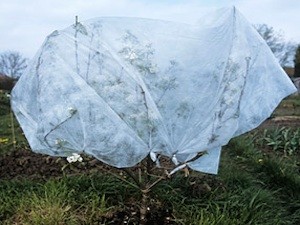 Where to grow Gooseberries
Gooseberries prefer a an open and sunny site but will tolerate partial shade. Care should be taken to avoid frost pockets as although gooseberries flower later than currants they can still be damaged by a late frost. To prevent flower damage (and subsequent lower yields) drape horticultural fleece over the bushes if frost is forecast.

How to grow Gooseberries
Prepare your soil before planting by digging over a 2ft square section and removing any deep rooted perennial weeds and adding a generous amount of well rotted manure. You can also mix a handful of our 'Seafeed' manure and seaweed pellets in to the first few inches of soil to give your new plants a head start. 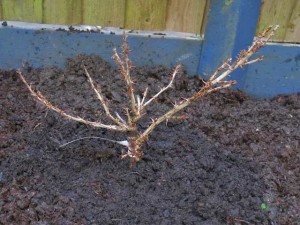 Bare root plants should be planted out in October/November but can be planted anytime over the Winter in mild areas where frost is rare, otherwise delay planting until February/March.

Spacing is 5ft between plants for bushes with single, double or triple cordon plants spaced at 1.5, 2 and 3 foot respectively. In this case we are focusing on bush growing as it is the easiest, has the highest yield and is the most common method. 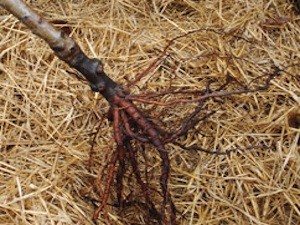 Planting Bare Root Gooseberries
Unlike blackcurrants which are planted 2 inches lower than they were originally grown, gooseberries are put in at the same level as the old soil mark on the main stem. You should be able to see a transition from darker to lighter wood  which marks the old soil level.

Place the bare root plant in the planting hole and gently spread the roots out to cover as much of the area as possible. Back fill the soil removed from the hole while mixing in well rotted manure and/or garden compost as you do so, firm the soil around the plant with gentle treading.

Pruning Gooseberries Initial Pruning
Remove any suckers from the base of the plant. A sucker is a new stem growing up from the base of the main stem or root ball. Cut back the rest of the branches to approximately half of their length, cut at an upward facing bud to encourage growth upwards rather than outwards. 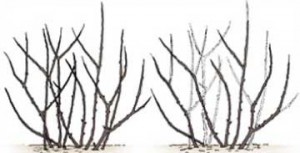 Yearly Pruning
It is recommended that you leave new gooseberries bushes unpruned for the first three seasons to allow the bush to get established.

The ideal bush shape is an open 'goblet' with a single main stem and an open space inside the bush to allow light in, to aid air circulation and to help avoid thorns when picking. The open bush with sparse foliage at the base also helps control gooseberry sawfly caterpillars as they don't like open situations. Sawfly can decimate a healthy bush incredibly quickly so worth keeping an eye out for; I had them on my currants (they are a problem with currants and gooseberries) a couple of years ago but I find you can quite easily keep populations down by picking off the caterpillars when you see them, an open bush makes this much easier. 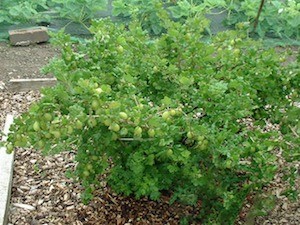 The thing to remember is the best fruit is produced on last years wood so any branches 3 or more years old should be removed on a yearly basis to keep your bush at its most productive. Old wood is darker in colour than pale young wood with thicker stems so is relatively easy to spot.

To achieve the goblet shape prune out any stems growing up inside the bush and any lateral branches growing in towards the centre. Remove any low or 'hanging branches' growing outward from around the base for the plant as they will impede access at harvest time and result in spoiled lower fruit. Also remove any dead or dying branches as they are unproductive and can be a starting point for disease. 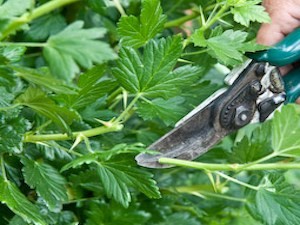 Summer Pruning
Gooseberries will also benefit from Summer pruning in late June/early July where all fruiting side shoots are cut back to 4 or 5 leaves from the base of the shoot. Summer pruning should be practiced only if growth is vigourous and can be omitted in a slow year.

Seasonal Care
Keep the soil around the base of the plant relatively weed free, this is better done by mulching and hand weeding rather than hoeing as roots are shallow and easily damaged. Mulching is also the ideal way to feed your gooseberries with a thick layer of well rotted manure and/or garden compost providing all the nutrients required.