Using growbags couldn’t be easier, here is how to grow potatoes in a bag. The great thing about potatoes is that they can be grown almost anywhere, even if space is limited like in an urban setting. Reusable potato growbags are available and are ideal for growing your own potatoes on a patio, balcony, greenhouse, polytunnel, or by the back door. What You Need: 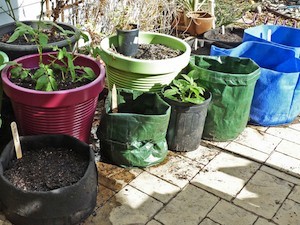 Where to place potato grow bags First off, choose a light, warm sunny spot to place your grow bag or planter in, if possible choose an area with at least 6 hrs of direct sun per day. Most potatoes should be planted between mid March to late April, however they can be planted as early as February in a greenhouse, polytunnel or conservatory and either grown in situ or moved outside after all danger of frost has passed. 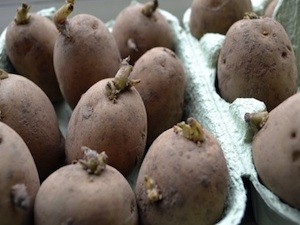 Chitting Potatoes Chit the potatoes to produce sturdy shoots, encouraging quicker establishment and better growth. Chitting means leaving the potatoes in an open egg box or similar for approx 4 weeks to allow them to sprout. Place the potatoes with with the most 'eyes' facing upwards and leave them in a light, cool and frost free place. The eyes of a potato are the tiny buds in the skin where the new shoots come from. Planting Potatoes Fill the planter to approximately 20cm with your multi-purpose compost or top soil/compost mix. Evenly spread 3 or 4 seed potatoes on top of the compost and cover with another 10cm of compost. 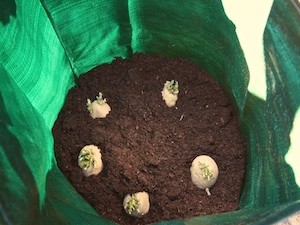 As the plants grow gently cover the shoots with more compost until the level is just below the top of the bag or planter. Remember to keep the compost moist but not saturated, occasional heavy watering is better than regular light watering as the water needs to get down to the lower roots. A potato feed with a high potash content will help increase the potato yield substantially, our orgainc potato fertilizer is perfect and gives you all the information you need on the pack. Don’t use feeds high in nitrogen as these will give excess leafy growth at the expense of the potato crop. Potato blight can rear it’s ugly head from July on. Many traditional methods of controlling blight like Bordeaux mixture are no longer available on the market so either growing early varieties is recommended as above but there are also a range of blight resistant seed potatoes available like Sarpo Mira, Setanta or Orla. 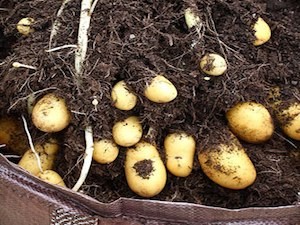 Harvesting Potatoes Early varieties of potato should be harvested as they are needed because they don't store very well. Maincrop varieties can remain in the bags until needed, store the bags indoors to avoid freezing on cold Otherwise potatoes can be stored in hessian bags or in sand in a cool, frost free environment. They should be checked occasionally for signs of rot, and the affected tubers removed so as not to infect the other potatoes. First Earlies are best harvested in small quantities and eaten straightaway when fresh in June and July. Second Earlies and Salad varieties can also be harvested in small quantities and eaten when fresh in June and July. Alternatively, if the skins are allowed to ‘set' - i.e. they don't rub off when lifted - cut the foliage down to stop continued growth, lift in September and store as per Maincrop varieties. Maincrop varieties can be lifted from September onwards and stored as long as the tubers are lifted in dry conditions or are properly stored. Store in a hessian sack in a cool, dark, frost-free area.

The 7 Secrets to Growing Success with Potato Growing Bags

Follow these 7 points to grow the best Grow Bag produced potatoes. Chitting Potatoes – Chit tubers (to produce sturdy shoots) in a cool light place before planting to encourage quicker establishment and growth. When to plant potatoes in growing bags– Start your grow sacks in greenhouse or conservatory from as early as February and move outside when all risk of frost is past. Where to grow potatoes – All potatoes do best grown in a light, warm sunny spot. Soil and Compost – use a good proprietary compost or an equal mix of compost and soil and place a layer 4-6 inches in the bottom. Place potatoes on compost and cover with a further 4-6 inches of compost. Earthing Up Potatoes – Potatoes grow from the stem beneath the surface. So keep covering the foliage with more compost as it grows until the sacks are full to within 4 inches of the top. Feeding and Irrigation – This really is the big the secret. Mix potato fertiliser or a good general purpose fertiliser such as Growmore with the compost during planting and earthing up. Keep compost consistently moist (but not over wet) and you will reap dividends for your crop. Potato Pest Control – Finally, Potato Blight can be a major problem from July with later yielding crops. Help fight this fungal disease with ‘Vitax Bourdeau Mixture’, a traditional, protective fungicide, available in 'pest control' section.