July in the garden is a bit of a double edged sword, Mother nature shows her muscles both in the vigourous growth from your vegetable crops but also in the vigourous growth from your weeds. While you marvel at the speed your runner beans scramble up their supports you must also me amazed at how an area you weeded 5 minutes ago is again covered in fat hen and groundsel seedlings.

I would also prefer if Summer was a bit longer so have made some enquiries on changing the Earth's tilt' but unfortunately they have come to nothing. Today the Earth leans at 23.5 degrees off the plane of orbit. I had a glimmer of hope when I learned there is some scope for movement (between 22.1 and 24.5 degrees) but I would have to wait around for 41,000 years to see any effect. 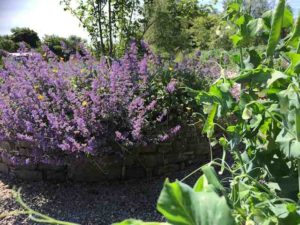 So, in the meantime what is going on in the vegetable garden? There are plenty of jobs to do but we might start off with what you can sow or plant now if you have space or are just getting started. In early July there are still plenty of significant crops to sow including French and runner beans, peas, beetroot, carrots, turnips, swedes, cauliflowers, chicory, endive, kohl rabi, squash and courgette. You can also sow throughout the Summer a wide range of salad crops including all lettuce types, oriental 'cut and come again' salads, spring onion and radish. If you include seedling plants (sown in April/May which we conveniently sell seedlings on our website) you will have an even broader range of options, plants like calabrese, purple broccoli, Brussels sprouts, Autumn, Summer and Winter cabbages, cauliflower, celery, celeriac, fennel, kale, leeks are all ready to go in now so there is still plenty of life left in the season. 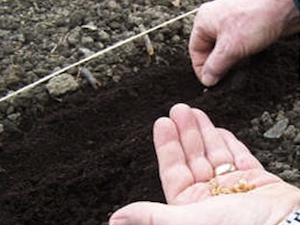 Sowing in dry weather As you may know I prefer to sow nearly all crops in modular trays for planting out later because I am more in control of the early stages of growth. If you are sowing direct, and with some plants you will have no choice (carrots and parsnips), the following tip might be helpful. Compost retains moisture better than soil so when starting seeds in dry weather it is a good idea to hollow out a drill 5cm deep and fill with potting compost. Your seeds will thank you for the easy root growth anyway but the compost will stay moist for longer after watering and give your seeds a better start. 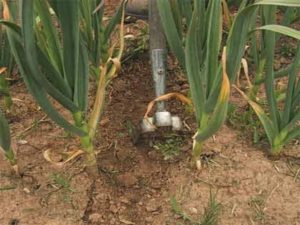 Hoe on sunny days If, like me, you don't like spraying weed killer everywhere you will need to keep your paths and beds clear using a hoe. If you keep on top of it hoeing is very easy as a immature weeds are a cinch to remove. The old adage '1 years seed is 7 years weed' is true; if weeds are allowed to spread their seed they will be a headache for many years. The opposite is also true, if you prevent weed seed from spreading you will find your garden becomes easier to maintain every year. If you hoe on sunny and dry days you don't need to collect the weeds either as they will shrivel and die quickly on the ground. Hoeing the surface of your soil will also reduce evaporation in dry weather so helpful in reducing the amount of water needed in the garden. I can't recommend the oscillating hoe highly enough for ease of use and speed, named 'The Best Hoe in the World' by Alys Fowler this would be a purchase you won't regret. We stock 2 sizes on our website with standard and large size heads. Mulch to retain moisture I been guilty of not practicing what I preach this year and have not been mulching as much as I should. To be fair this was because my Landrover gearbox jammed so I couldn't collect seaweed with the trailer. 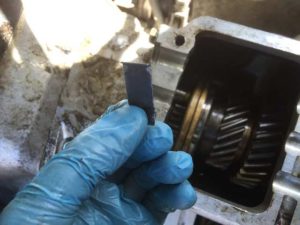 I know many of you will be interested in Landrover series 3 gearboxes so I feel I should report that one of the 3/4th synchro springs (pictured) had snapped and dropped out. Half of it became wedged in the sychromesh unit which locked it and meant I had no 3rd or 4th gear. As top gear in an old landrover is the equivalent to 2nd gear on a horse this was not something I could ignore. I expect you had to remove the gearbox? I hear you ask. Well, no, I didn't! I removed the selectors and did it through the top of the box! Despite what everyone has told you this is not only possible but not very difficult either, feel free to contact me for more information. I have installed an extra phone line to field all the calls.... 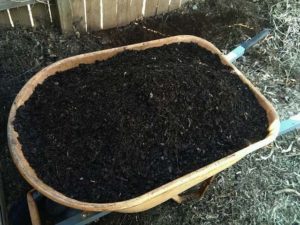 Mulching your vegetable beds really is the way forward for any number of reasons but in the Summer it is most helpful for retaining soil moisture. In dry weather mulch acts as a barrier against evaporation meaning less watering and a more stable growing environment for your plants. Also, once the mulch rots down and is incorporated into the soil will increase the soils ability to hold moisture. A 5% increase in organic material will quadruple the soil's water storing capacity. The most common mulching materials can include lawn mowings, leaf mould, well rotted manure, garden compost and seaweed. On the other hand, if you live in a wet area (like me) mulch will protect the soil from nutrients being washed out by Summer rain. 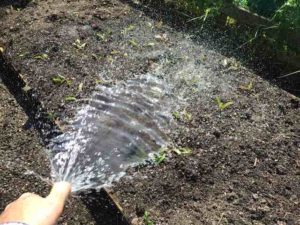 Water heavily The rather odd photo to the left (which looks like I have developed the ability to squirt water out of my thumb) is of me watering some recently planted beetroot seedlings on a sunny morning. It is better to water heavily in the morning if required than small doses during the day as deep watering will be much more beneficial. Deep watering encourages deeper roots which will make the plant more resilient if the soil dries out while shallow watering encourages roots nearer the surface. Surface roots leave the plant more vulnerable as the top layer of soil can loose moisture very quickly in hot and dry weather leaving the plant parched. Light watering on a hot day will also have little effect as a large proportion will evaporate anyway. 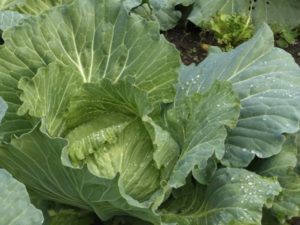 Drooping brassicas - By the way, you will often see plants with large leaves (like cabbages or broccoli) wilting on a hot day but this does not mean they are about to keel over. On days where evaporation is high the roots of large leaved plants can struggle to keep up with the moisture lost through transpiration in the leaves (the equivalent of plants breathing) leading them to wilt. Watering may not help as lack of moisture in the soil isn't the problem, it is just that the plants water transport system has reached its limit. You will notice if the day clouds over or as evening approaches the leaves will recover again as demand for moisture reduces. 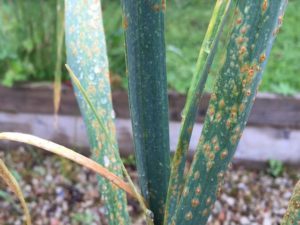 Allium Rust If you are growing garlic, leeks or onions there is a fair chance you have the fungal disease rust appearing on the leaves around now. There isn't a whole lot you can do about rust, it is more prevalent with poor air circulation so wider spacings can help but I have found it is more or less inevitable in my garden. I don't mind rust in the later stages of growth as it doesn't affect the garlic bulb or onion so won't reduce the yield much. The rust spots do reduce the efficiency of the leaves so is more of an issue early on as bulb growth will be restricted. In the early stages you can remove any potions of affected leaves which will slow it down but once it takes hold it is a case of living with it. It is worse in damp and humid weather so all you can do is pray for sunshine. By the way, some of you might remember I didn't get around to planting my garlic cloves last Autumn so had experimented by putting them in pots in the tunnel in November? The reason I did this is Autum 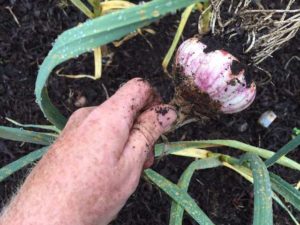 n planted garlic produces larger bulbs than Spring planted cloves simply because it has put down some growth before going dormant over the Winter. I planted some cloves indoors in trays to see would they sprout and grow (they did) and then planted them out in March to give them them a slightly longer season. If you are doing this you need to make sure you leave the trays outside from late Jan to March as they need a period of cold for the clove to separate and form a bulb. Anyway, it worked. As you can see in he photo above I have some nice large bulbs with densely packed and firm cloves which are just about perfect. 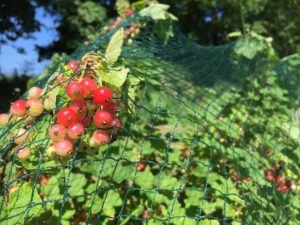 Netting Fruit This year, for the first time ever, I bothered to put bird nets over my red currant bushes. I couldn't believe the results. I just came back from holidays to an unbelievable amount of fruit and have now pretty much filled a small chest freezer with bags of currants. I have absolutely no idea what I am going to do with them all. To be fair the bumper harvest is not just a result of starving the birds it is also because we had dry sunny weather with little wind in the Spring when the fruit was flowering. I also have very excellent crops of gooseberries and raspberries while my apple and plum trees are also heavy with immature fruit. If you have a year of heavy crops on fruit trees like apples, plums and pears it is a good idea to remove about a third of the fruit before it ripens. You will get a better sized harvest from the remaining fruit and will avoid branches breaking if it gets windy. 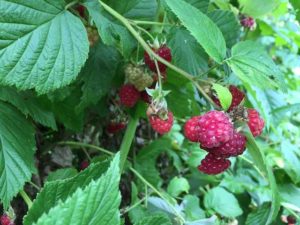 My netting efforts consisted of wrapping the bushes in bird net and stapling it to the ground to stop the birds getting in around the edges. While I was delighted with the results it was a bit of a cumbersome process and meant there was no way I was taking it off again. Not removing the net until harvest time is fine for currants as they will hang on the bushes until all of them are ripe but this is not so good for raspberries which ripen at different times. 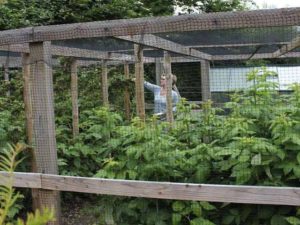 If you are serious about growing fruit the time comes when you need a walk in fruit cage. For me, that time has come. I am pretty excited about this as I am also looking for a nice, chunky video project to do and I think this will be a great one. We have an area of unloved, poor land beside the vegetable garden and which is currently covered in weeds and rushes and is perfect for a complete transformation. Over the coming months I will be building a large walk in fruit cage and making the site productive using raised beds. I will also be showing how to build the various supports used to grow a broad range of fruit. Hopefully we can get started in the next few weeks, I will keep you updated on the project on our blog. That's it from the garden for now, I will add more in the next couple of weeks. Please let me know if you'd like me to cover anything in particular, I will always be happy to help!