Pricking out tomato and chilli seedlings This week I have started pricking out and potting on my tomato seedlings, you can see the tomatoes happily growing away in the photo above. There are a couple of reasons why I start tomatoes in trays rather than individual pots, the main one being pots would take up too much room in the propagator. I have over 60 young tomato seedlings in the tray above which only takes up 20 x 30cm, this allows me to germinate multiple trays of seeds in a relatively small space. 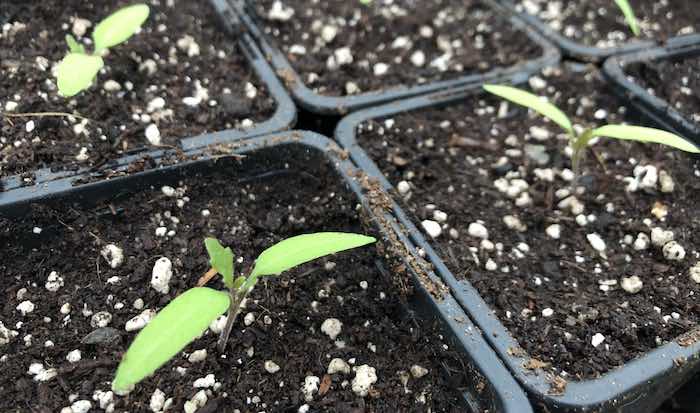 As I said in the last mail, potting on also allows me to recover seedlings which may have got a bit leggy in the propagator. This is pretty common, especially if you have some varieties that have germinated quicker than others. Seeds may need a high temperature to germinate but unless you have growlights, the heat should be reduced when the seedlings come up as there won't be enough natural light to balance the growth produced by the heat. If only half your tray has germinated this can lead to the early seedlings growing away too fast while you are waiting for the stragglers to germinate. 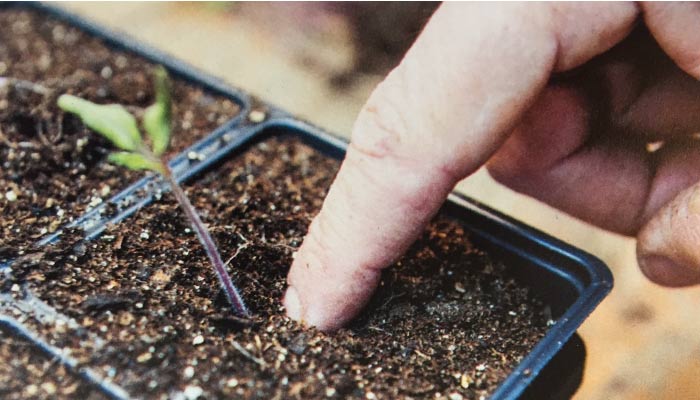 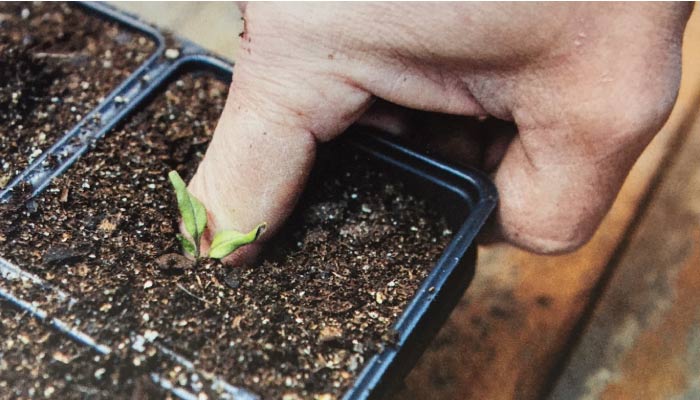 Tomato seedlings are planted up to the first set of leaves, meaning most of the stem is buried in the compost. Tomato plants are almost unique in that buried stems will produce roots; deep planting is therefore an advantage as it helps build a more extensive root system. You can do the same to recover chilli seedlings (in fact you can do it with most plants apart from courgette, cucumber or lettuce) but the stems will not produce roots. 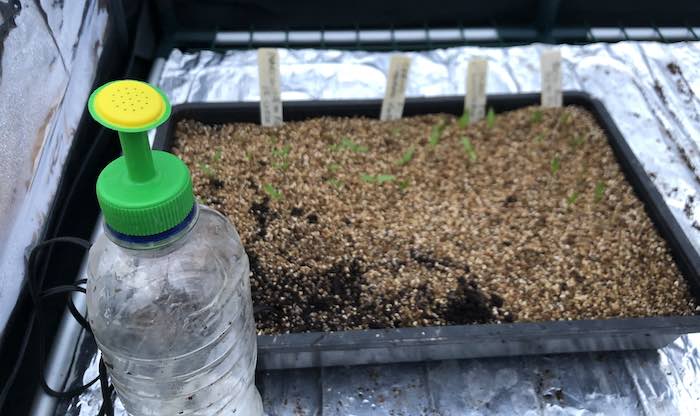 Watering tip Once transplanted, seedlings will need to be watered. Remember that the seedlings have been in warm compost in the propagator so they won't appreciate a cold shower. My tip is: Keep a bottle of water in the propagator (complete with mini watering rose if you know a fabulous company who supplies them) so the water is at more or less the same temperature as the compost. 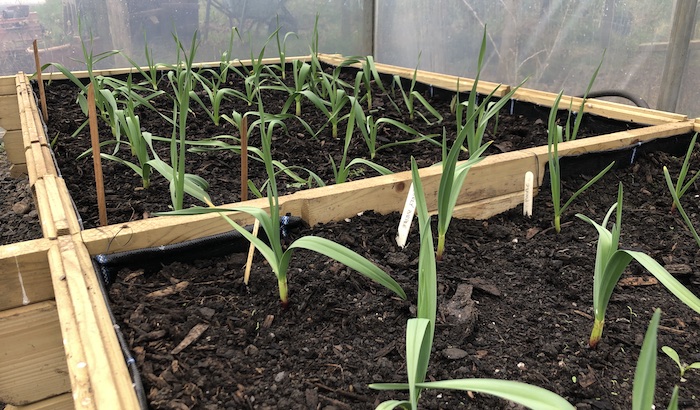 Garlic in the polytunnel If you haven't planted garlic yet it is now time to put in Spring varieties, you really need to get them in before the end of the month, we still have stock if you need some. The photo above is garlic planted in my polytunnel last November which is coming on very well, naturally it is way ahead of the outdoor plants. Garlic is often overlooked for polytunnel growers but it is an ideal crop as most of its growth happens when there isn't much else going on. Hot house crops like tomatoes, chillies or cucumbers can't be planted until the soil in the beds has warmed to at least 16˚C (20˚ for cucumbers or melons) which will be in May. Polytunnel garlic should be ready by mid May so is harvested when your warm climate crops are ready to go in. If you are growing garlic indoors don't forget that it needs plenty of water otherwise it may suffer more from the rust (a common fungal disease that affects onions and garlic) which will turn the leaves yellow and bring maturity forward before the bulbs have fully developed. 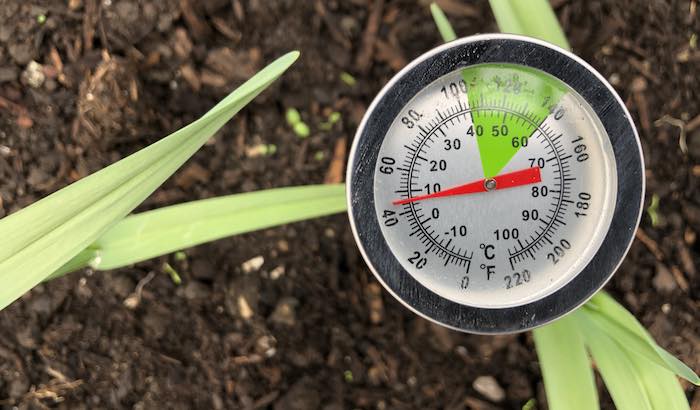 Soil temperature Speaking of soil temperature, you would be surprised at how long it takes to warm up. It is very warm in the polytunnel today but I took a quick snap of 'my' soil thermometer at lunchtime and, as you can see, the beds are still only 9˚C. I hope my wife isn't reading this because the last time she saw this thermometer it was stuck in the turkey. I think I mentioned this before but keep soil temperature in mind when sowing or planting anything early in the year, a sunny April day can easily be a warm 22˚C but the soil will be way behind, probably only 8 or 9 which will be too cold for most crops. 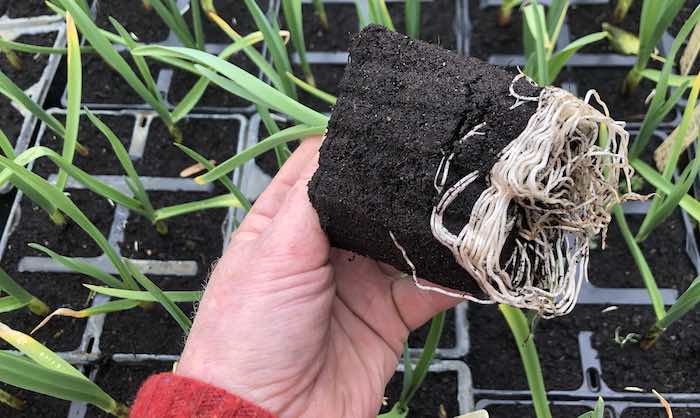 Autumn planted garlic in trays I probably shouldn't be showing you this but I also took this photo today of garlic I has planted in trays in November and really should have in the ground by now. You can see the roots are starting to coil around the base of the cell and need to be set free. I will be getting these in the ground this week but the point is keep an eye on any overwintering container grown plants as they shoot off very quickly at this time of year. Luckily garlic has smooth roots that are easily untangled so a bit of extra care spreading out the roots when planting should fix this. I will be spacing my garlic at a generous 25cm all round for large bulbs. 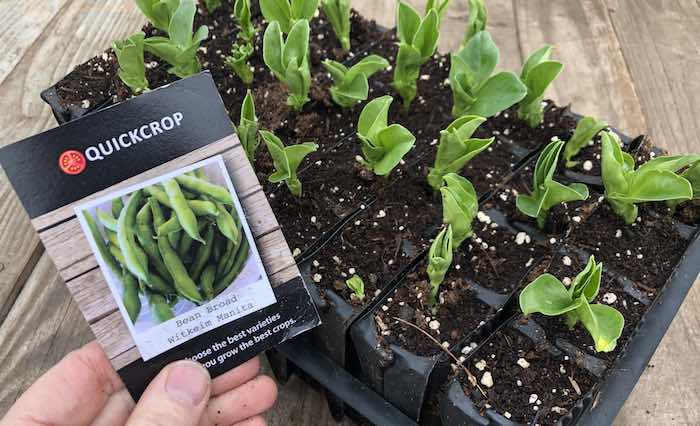 Broad Bean This picture was taken a week ago of broad bean 'Witkeim Manita' seedlings sown 4 weeks ago. They have put on a lot of growth since and will need to be planted out asap. We are also in the perfect time to sow broad beans direct in the garden (once the soil has dried a little) so both will be going in at the same time. My module sown beans will be ready 4 weeks ahead of those sown as seed giving me an extended harvest time. The spacing for broad beans is 15cm between plants and 45cm between rows. There are 2 types of broad bean, 'Longpods' and 'Windsors'. They are both hardy but longpods are hardier so suitable for overwintering or early sowing while the Windsors are better sown towards the end of the month. The windsor varieties are not as high yielding but are viewed by broad bean connoisseurs as having a better flavour. 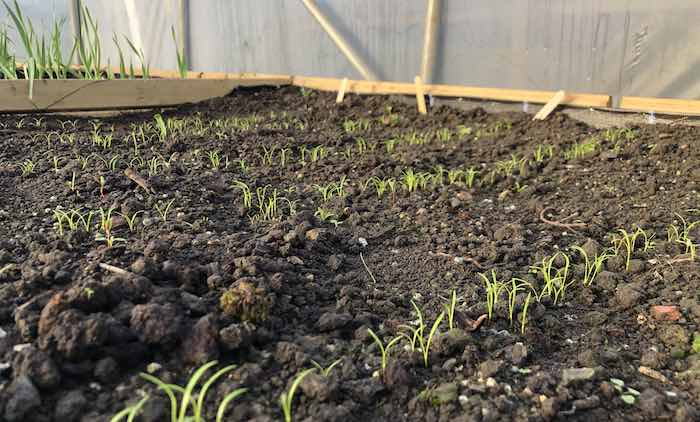 Carrots in the polytunnel You might remember that I sowed carrots in the polytunnel in February. You can sow as early as late January (and can even sow in November for overwintering) but these were sown on the 17th of February. It is always an anxious wait for carrots as they take 2 weeks or more to germinate but as the soil temperature has been fluctuating between 8 and 10˚C (carrots need 10˚ to germinate) I was getting worried. Anyway, it's good to see them above ground. 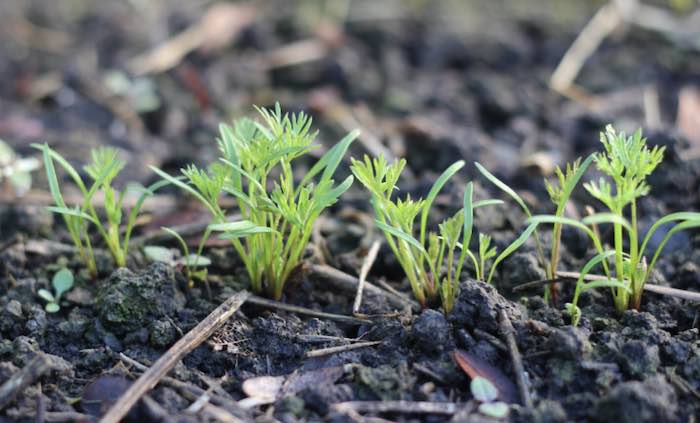 I see a lot of photos (including from me) of people thinning carrots when they have reached baby carrot size but not only is this more difficult, it also means a lot of bruised foliage which will inevitably attract the carrot root fly. It is better to thin early, 4 weeks or so after sowing because you can see what you are doing and have less chance of damaging the roots of neighbouring seedlings. The early variety I have sown is 'Amsterdam Forcing', I will be thinning them to leave a 4cm space between each root when they are about the size of the seedlings above. 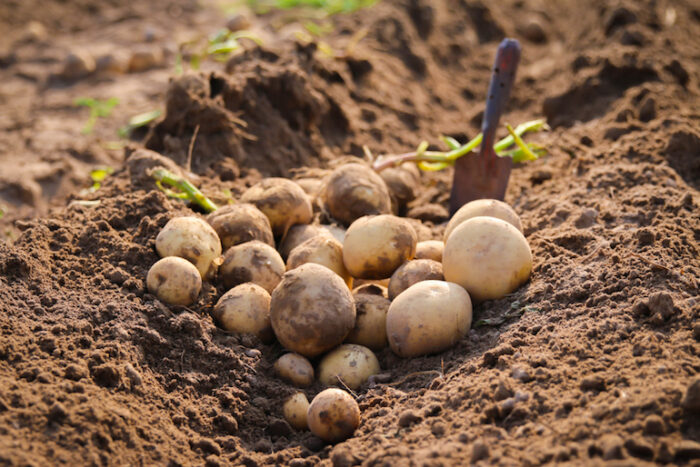 Planting Potatoes Traditionally first early potatoes are planted in mid March. For those new to this, there are three potato types categorised by how long they take to mature and therefore how early in the year you can harvest them. The three types are first early (planted mid March), second early (planted early April) and maincrop (planted mid to late April). Why not just plant them all at the same time? The idea is to extend the season so you can keep yourself in potatoes for as many months of the year as possible, if you also grow early potatoes in a polytunnel you can nearly have spuds for the kitchen for the full 12 months. 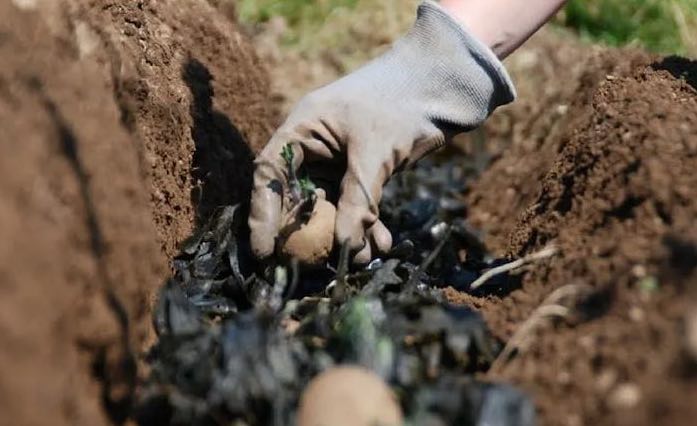 Early potatoes don't have as high a yield as maincrops and neither do they store as well. They do, however, have a superb 'fresh' potato flavour and are likely to be out of the ground before potato blight hits in July/August. Maincrop varieties are not harvested until October and have good storage potential so keep you in tasty spuds over winter up until the following April. If you can get your hands on some seaweed, potatoes seem to particularly like it. Either use it as a mulch to earth them up or plant them in a seaweed lined trench as above. The spacing for early potatoes in 25cm between plants and 50cm between rows. 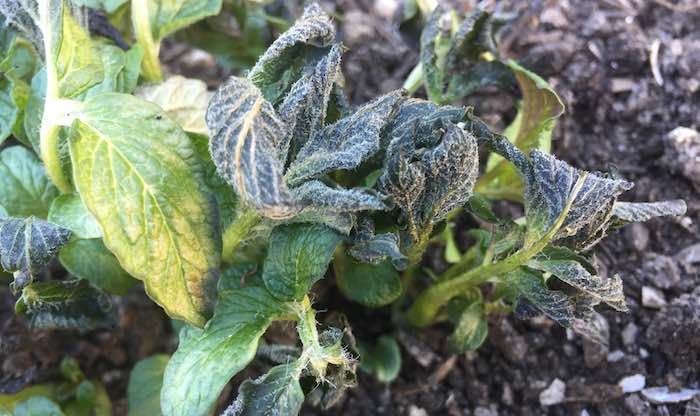 Be aware that potatoes are very sensitive to frost which can easily wipe out new shoots when they appear above ground. The photo above is from my potato patch last year when I didn't heed my own advice. You can protect young potato shoots by pushing soil up around them as they grow or covering with horticultural fleece until early May.