I have two books which are my vegetable growing bibles. One is Joy Larkcom's 'Grow Your Own Vegetables' and the other is 'Organic Gardening - The Natural No-Dig Way' by Charles Dowding. Both are fabulous books, both are based on sound growing principles and both champion mulching as the cornerstone of fruit and vegetable growing. I had the good fortune to attend one of Charles Dowding's courses the weekend before last where he talked about his 'No Dig' approach to growing and why it works so well. I had also visited Charles in Somerset a few years ago when he had just moved house. As we strolled through his garden I had assumed we were walking through a mature plot, many seasons old, but was amazed to discover only 6 months previously it has been a green field site. The size and quality of the plants were astonishing with rows of glossy vegetables and not a weed (and I mean not a single weed) in sight. I took a number of pages of notes at the course to remind me of the topics discussed and include some of the key points below. I should make it clear that this is my understanding of what was said rather than Charles's own words but I think I got the gist of it. 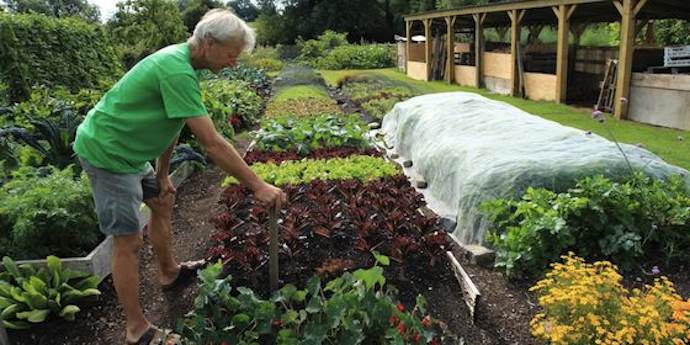 Not digging means fewer, not more weeds. Charles has been practicing the same approach to growing for over 35 years. He has written many books on home growing but also uses his methods to grow commercially so has long since proved their efficacy. Not digging the soil and adding compost mulches to the surface is the key to Charles's approach, essentially copying nature as this is how soils are formed in the first place. The reason not digging reduces the need for weeding is that turning the soil brings weed seeds to the surface where they germinate. Your garden soil will contain millions of viable weed seeds but if they remain buried they will never germinate as they have insufficient light to do so. Adding layers of compost also block out light so provided the compost is relatively weed free your weeding will be significantly reduced. 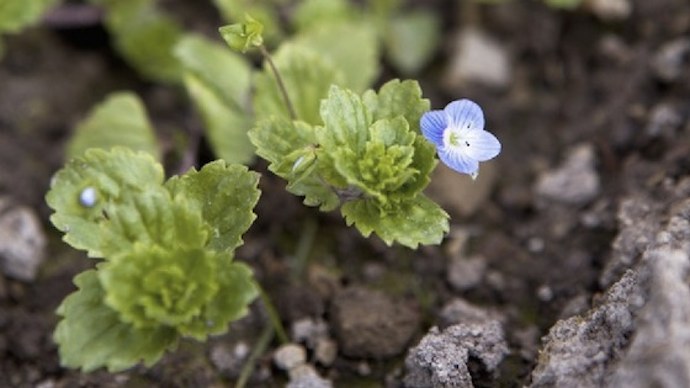 Charles also pointed out that weeds are only doing their job and are providing a 'healing' service by protecting naked soil. Soil that has been left bare will deteriorate unless it is covered quickly by vegetation so their role is a very important one. If we don't want weeds we need to provide an alternative cover to prevent this repair process from kicking in. Killing Deep Root Weeds Obviously perennial weeds like dandelions, thistles or dock will grow through a mulch so need to be killed off before you start. Charles uses layers of cardboard or old wool carpet to block out any light which, over a season, will deal with most weeds. Deep root weeds store energy in their roots but if the leaves aren't able to produce new sugars through photosynthesis the plants will exhaust themselves and die. Any stubborn weeds that remain can be individually dug out with a trowel. The cardboard needs to be a few layers thick for this to work and can be weighed down with stones and covered with compost. It does not need to be removed as it will eventually break down and be incorporated into the soil. 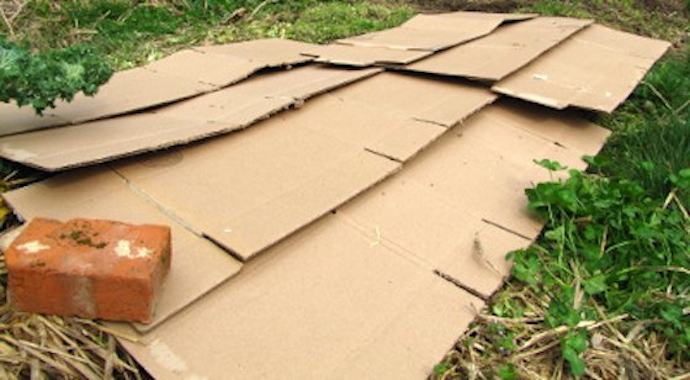 Adding feed to the surface makes more sense The point Charles makes is that in nature nutrients are always added to the surface of the soil. Fallen leaves or dying vegetation is partially broken down above ground by fungi and bacteria. This material is then incorporated by earthworms and other soil life coming to the litter layer to feed, before transporting nutrients below the surface and depositing them in their waste. Organic material also needs air to decompose and release its nutrients so will break down quicker on the soil surface than it will if dug in. The upper levels of soil are the most fertile and, as plants have evolved with the soil, their feeding roots are also closer to the surface. Basically, the whole system is set up for fertility working from the top down so how can burying organic feeds be good practice? 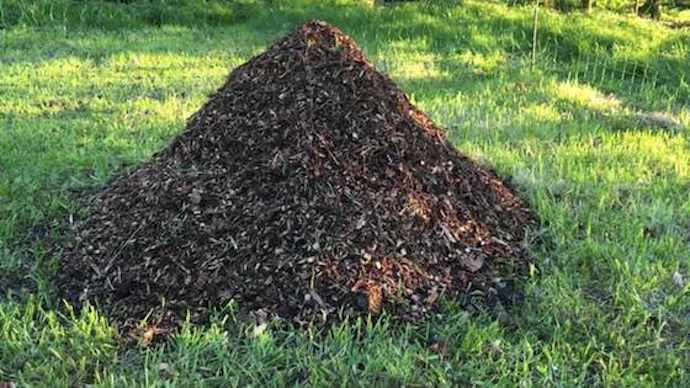 Digging in compost or manure can cause issues that are not a problem when surface feeding. For example, manure or compost which has a high woody content (this can often be the case with municipal compost) will take nitrogen from the surrounding soil in order to break down the carbon in the wood. This will result in nitrogen starvation symptoms in the surrounding plants like yellowing leaves and stunted growth. A mulch of the same material will not cause nitrogen starvation because the carbon is in contact with a much smaller surface area than if it were mixed in. 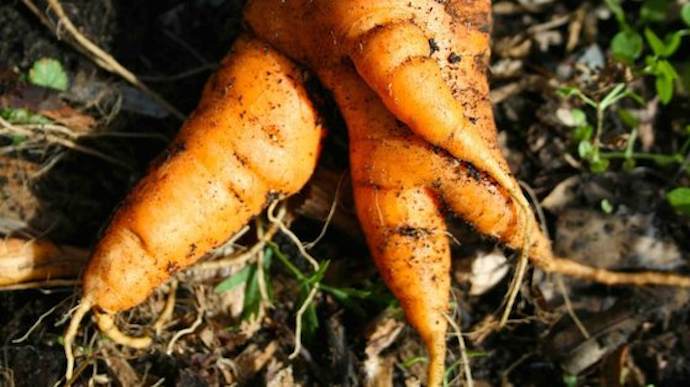 Similarly problems with manure and carrots are avoided with top dressing. It is generally advised not to use compost or manure when planting carrots as the roots will change direction in search of buried patches of fertility. This results in forked or misshapen carrots. This advice leads to the misconception that carrots don't like to be fed which in turn leads to disappointing crops. Carrots do like a nutrient rich soil but when this is produced by surface mulching it works because it results in an evenly rich mix rather than one containing localised pockets of fertility. You can even add feed material during the growing season and still grow lovely straight roots. 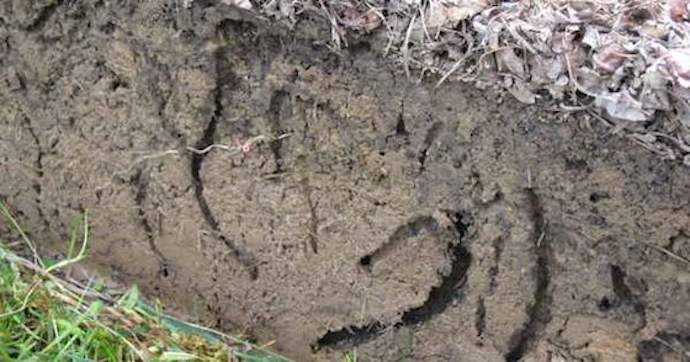 Drainage and aeration Adding a surface 'feed layer' also improves drainage and aeration of the soil below. There is no need to dig as the more food there is up top, the larger the populations of soil life you will have. Soil life burrows, mixes, makes tunnels and opens up the soil, this lets water easily drain through worm channels and prevents water logged beds. Digging breaks up these valuable networks and though you think you are doing a great job mixing a nice crumbly soil, you are actually compacting it in the long term and damaging it's structure. Mycorrhizal fungi Soil is not a static commodity, it is a living system. This system has evolved over millions of years to process surface organic waste and has many different components. As well as the network of tunnels produced by mobile soil life there are also large networks of fungi that work in tandem with your plants. 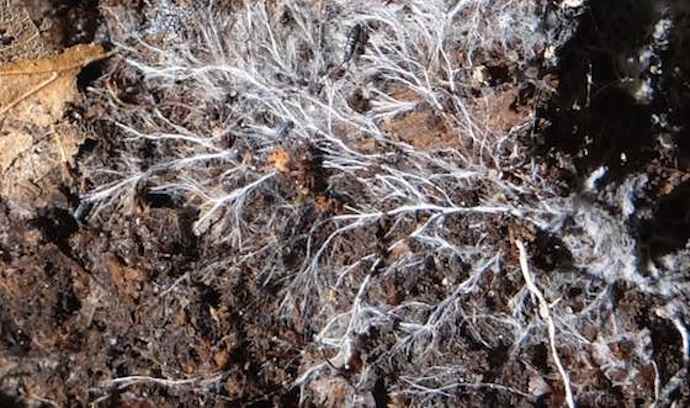 Mycorrhizal fungi transport water and nutrients to plant roots in exchange for sugars that the roots secrete to feed them. The fungi essentially give your plants a secondary root system with a much greater surface area to absorb nutrients than would be possible for your plant to produce. These networks take a long time to grow yet only minutes to destroy so another good reason to leave your spade in the shed. Sowing seeds and planting transplants Charles adds 3cm of compost a year to flower borders and fruit trees, and up to 5cm a year on vegetable beds meaning the top layers of soil are always very fertile. Obviously the top layer is where you sow seeds or plant seedlings which means they are going into the very best growing medium. High fertility also means planting distances can be reduced leading to more complete ground cover and less room for weed seeds to germinate. Charles usually adds a layer of bulky manure covered with good garden compost before Christmas. The manure breaks up over winter and only needs a rake to remove any large lumps before sowing or planting out. 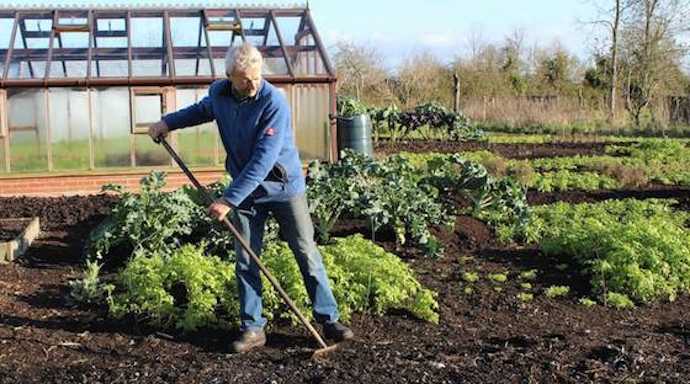 Plant feed made simpler One of the things I really liked about Charles's method was how simple it is. You just add fertile mulches to the whole garden. All the beds have the same nutrient levels so will all produce vigourous, healthy plants. Also, because nutrient levels are so high there is no need to apply fertilizer for follow on crops (e.g. ate turnips once your potatoes have come out) as there will still be plenty of fertility left for a second crop. My brilliant question I have been practicing 'No Dig' for a few years now apart from when I harvest my potatoes. I end up digging over the whole bed to try to remove every one (I never do). Anyone who grows potatoes will know that even the tiniest potato left in the ground will sprout the following year, usually in the middle of your neat row of carrots. I asked Charles how he deals with this (thinking I had caught him out at last) and discovered I have been planting my potatoes too deep. I usually put my seed potatoes in at around 10cm deep but Charles recommends no more than 5cm. Shallow planted potatoes will naturally grow in the loose, fertile much on the surface rather than push into the more dense soil below. 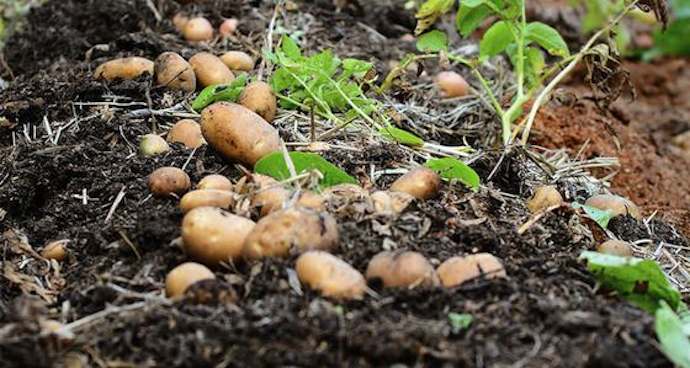 Earthing up and preventing potatoes from being exposed to light can be done with further applications of mulch (or in my case seaweed). Charles says the whole potato plant can be easily pulled up when ready without having to dig over the bed. The harvest will also be a lot cleaner with just a quick brush required to prepare for storage or the kitchen.

That's about it I actually have twelve A4 pages of notes, that's just the first two but we'll leave it there for today. I will slip some of the nuggets of information from the other ten pages into later posts and will probably take credit for them myself....... As I've said Charles Dowding has written a number of books (9 in all I think), appears on Gardeners World, writes for national and international publications and is one of the very best in the business. You can visit his website here or by clicking the photo above. He runs courses from his garden in rural Somerset and further afield which can be booked on his site. He will be at Ballymaloe this year on June the 11th.