I rarely get out these days but myself and Niall always try to squeeze in a relaxing pint on a Friday evening. Pubs whether you like or loath them are great places to meet people in a similarly relaxed state of mind and if you can get out quick enough can be very fruitful places to spend an hour.

The week before last I found myself alone at the bar (Niall had other plans, or more accurately, someone had other plans for Niall) and I struck up a conversation with the guy beside me. Where am I going with all this? It turns out this gentleman is an amateur bee keeper with a sore hip who finds access to his hives a little tricky. Never being one to miss an opportunity (especially after a pint) it will come as no surprise to learn I am now landlord to about 10,000 bees.

When I say 10,000 that's only a few to get going. My hive is just a small colony to see how it all works out with just one layer of shallow honeycomb frames or 'supers' holding the aforementioned 10,000 bees. Apart from sitting by the hive and watching the bees land and take off that's all I've done so far so clearly I'm no expert but I thought you might be interested in what I've learned so far. 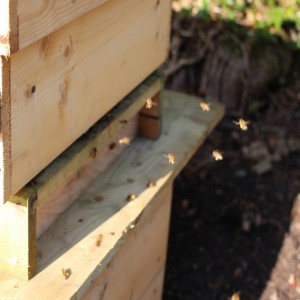 Well, first of all we need bees, and we need them badly - so if you have ever felt the urge to keep bees, now is the time to give it a go. You can feel doubly smug as not only will you be producing your own delicious honey but you'll also be contributing to the common good. Did you know that a third of the food we eat is pollinated by bees? If we don't have bees, we have a serious food problem as we have nothing to pollinate many of our fruit and vegetables. That's the selfish 'what about us' bit but of course we're only a small part of the jigsaw with huge swathes of our animal and plant life all dependent on this busy insect.

Have a look at this cool collaboration between a Gardener (Alys Fowler) and a Beekeeper (Steve Benbow). They're currently trying to raise money to publish a book 'Letters to a Beekeeper' which looks like it will be a wonderful rambling yet informative read. You probably think I have Alys on the brain but by chance I asked about pickles, she told me about bees etc...etc.....

So, back to my hive. When the hive arrived I hadn't cleared the space for it so I was told to keep it closed up until I moved it to its final position. If I had opened the hive and the bees set their internal compasses I wouldn't be able to move it even by a couple of feet without disorientating them. Michael (my bee friend) asked me to build a base about 2 feet of the ground for the bee hive which would then placed on top. He didn't seem keen to hang around and just left the hive with me telling me once I placed it to remove the strip of grey foam (pipe insulation I suspected) blocking the entrance. I didn't want to appear overly nervous so I agreed and gave him a sickly smile as he drove away. 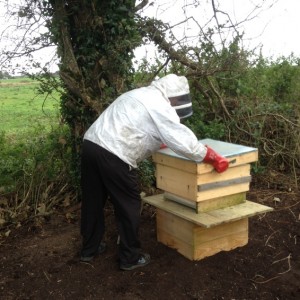 I don't know if you've every shuffled a few feet with a large box of bees buzzing under you chin but I can tell you it's rather tense. A bee hive is surprisingly heavy and I struggled to get it set on its plinth all the while picturing me dropping it and unleashing a murderous swarm of bees. That's not me in the picture by the way, I didn't get a go on the suit and the funny hat so no, I wasn't wearing any protective clothing.

I did get the hive fitted to my satisfaction (it has to be level) in the end and even though the bees were making quite a noise I quickly removed the door strip and made a run for it. To my relief only one or two bees emerged neither of which had any interest in me. 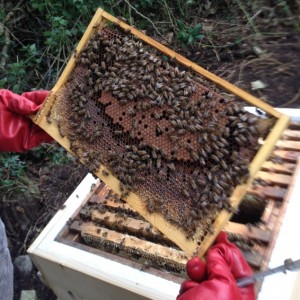 The following day Michael returned to open the hive and check if the Queen was still present. A hive without a Queen is doomed so it's important to make sure she's alive and well. You can see him checking the frames in the photo, the Queen is slightly larger than the rest (not that much) with a white dot on the back of her head and was thankfully still there.

So now what? The bees have been fed a syrup mixture to keep them going over their winter lock down and should be back in business by mid April next year. I have been completely enchanted by them in the meantime and can't go past the hive without sitting for a while and 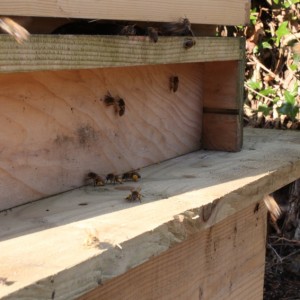 watching them come and go. I don't have the clothing yet so don't open it but you'd be surprised how entertaining it is to just keep still and watch them. You can see in the pictures the bright yellow protein laden pollen sacks attached to their hind legs being brought back from their foraging trips. It really is fascinating to watch.

I'm also delighted to see them buzzing around my vegetable garden which is about 150 meters away, It's the reason I got them really so looking forward to gold standard pollination next year.

Some facts (as I understand them):