How to prune Gooseberry bushes and currant bushes. Pruning fruit bushes can seem complicated but is, in fact, very simple. Many people are nervous about the process so leave fruit unpruned which will result in progressively lower yields as the plant ages. The thing you need to remember is no matter how badly you prune you will not ruin your plant beyond repair and can still get it back to top condition over a season or two. After a few seasons you will become an expert at what to prune out and what to leave and will enjoy caring for your fruit even more. Even if you only do the most basic maintenance and cut out any 4 year old branches you will vastly increase the productivity of any gooseberry bushes or tired seeming currant bushes.

I have laid some basic pruning techniques below starting with the most important. Are you ready? Let's get going..... 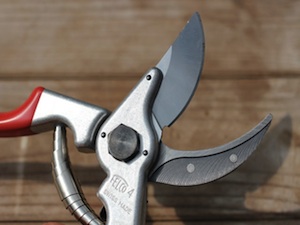 Firstly, get yourself a good pair of bypass secateurs. You want to be able to make a nice clean cut without crushing or tearing wood to encourage a quick healing process. We recommend the Swiss made 'Felco' range. In this article I use their no.4 secateurs and their no.200 expert loppers both of which are excellent tools very well suited for this job.

When to prune - Currants and gooseberry bushes are pruned when they are dormant, in the Northern Hemisphere this is between October and early March. It is best to prune just before the plants come out of dormancy which allows them to heal quickly with the vigourous new growth of Spring. In the case of gooseberries it is a good idea to delay until the buds are just beginning to open. This is because the spines on an unpruned bush will help deter bullfinches who like to eat the buds. 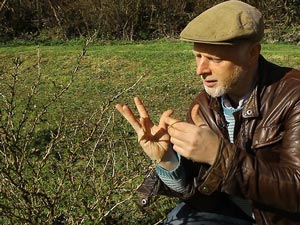 The shape of the bush - The ideal shape of a pruned fruit bush is a goblet shape with an open centre. Evenly spaced branches should face away from the middle of the bush and not compete with each other for available sunlight. We want as much light as possible to reach and ripen the fruit.

Step 1 - Cut out any branches that are 4 years or older. As we have said, the best fruit, both in quantity and flavour, is produced on 2 and 3 year old wood. 1 year old branches don't produce fruit and as they age past 3 years their productivity will decline. In simple terms no part of your fruit bush should ever be over 4 years old, the complete structure is constantly being renewed by annual pruning. Gooseberries and red or white currants are pruned in the same way. Blackcurrants are pruned in a similar way but fruit on 1 and 2 year old wood. 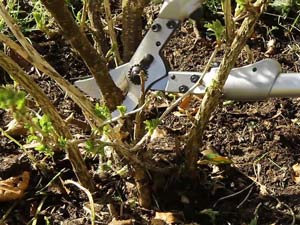 At any yearly pruning session only remove approx 1/3 of the total number of branches. Remove the entire branch right down to its base. Removing the complete branch will cause new branches to grow from the base of the bush. Trimming branches between buds or side shoots will result in vigourous growth of small branches that will thicken the bush and block out valuable sunlight.

Look for any large branches that are crowding the center of the bush and remove them completely. If the bush is an open shape already select the oldest branches. You should be able to identify old branches as they are darker in colour and are likely to have peeling bark. Again cut right back to the point of origin. You are better to use a good set of loppers for this task as mature branches can be too thick to allow a clean cut with a secateurs.

Step 2 - Remove any dead, damaged or diseased wood. As with the 4 year old wood it is better to remove entire branches or side shoots. If you are cutting out a small branch do so at the point it meets its parent branch.

Dead wood is easy to spot as it will be brittle and will have no buds. Damaged wood tends to happen where 2 branches are rubbing, you may see rough bark or areas where bark has rubbed away altogether. Diseased wood will have rough, raised areas of broken bark. 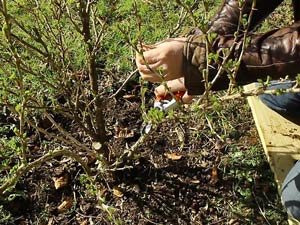 Step 3 - Remove any branches growing into the center of the bush. We want our nice open goblet shape so cut away any branches growing towards the inside of the bush and blocking out light. The other advantages of this open habit is it gives good ventilation which reduces the chances of mildew and also makes the bushes much easier to harvest.

Step 4 - Remove any suckers , these are single, upriht shoots growing out of the soil from around the main stem. They are cut back to the point where they emerge from the soil. We are also looking for branches that are growing on top of each other as the lower branch will be in shadow and won't produce the best fruit. It is usually best to remove the lower one as higher fruit is easier to pick but this will also be dictated by the age of the branches. Retain the younger of the two. 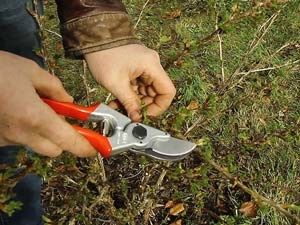 Step 5 - Lastly, if we need to, we can adjust the size of fruit the bush produces. If your bushes are yielding lots of small gooseberries or currants and you want bigger fruit you can cut back the side shoots to 2 buds from the start of last year’s growth. If you are pruning black currants avoid this step as fruit is also produced on 1 year old wood so we don't want to remove any of it.

You can identify last years growth by the change in colour from wood that has grown the previous year; 1 year old wood tends to be a light grey colour while the older bark is more brown. Cut back to 2 buds above the this join making sure to cut just above an outward facing bud so the resulting growth grows away from the center of the bush. 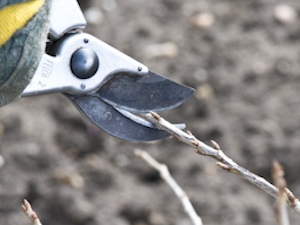 The last job after pruning is to improve the soil around the bush and give a slow release feed for the season ahead. Clear any weeds around the base and add a generous spread of well rotted farmyard manure. It is also a good idea to keep the area around your bushes weed and grass free. This can be easily achieved by applying a shallow mulch of lawn clippings. Avoid deep mulches as they exclude oxygen from the soil and can suffocate surface roots.

If you would like to see me pruning a gooseberry bush in my garden please click on the play button below, I hope you find it helpful.