We are taking a break from the vegetable garden this week and looking at some wild flowers as they are often far prettier than anything in the garden. This week's star of the show is sea campion (above) which I spotted while out for a walk on the beach with the dog. I took a couple of photos on my phone which I thought looked quite nice so here we go....... I'm not going to pretend I knew this interesting looking flower when I saw it, the information was provided by a passer-by who, seeing me lying prostrate on the ground (I was taking the photos above and below) was about to call an ambulance. 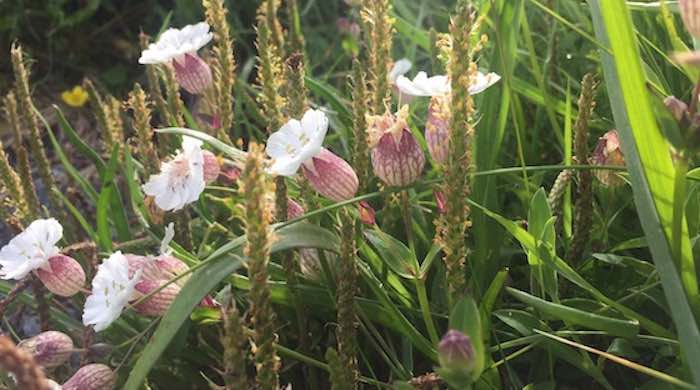 A relation of the carnation, sea campion, is common on Atlantic coasts of Western Europe. My new friend told me it was bladder campion but my contacts at Google say this is not the case, apparently there are a number of differences including the size of petals and the height of the plant. Sea campion is also known as 'dead man's bells', 'witch's thimbles' and 'devil's hatties' which I thought were rather sinister names for such a pretty flower. Folklore also holds that picking sea campion will tempt death (I didn't) but this may be due to it's habit of growing on the edge of cliffs. BTW the spires growing through the flowers are the seed heads of broad leaf plantain which happened to be growing in the same spot. Interestingly broad leaf plantain was known by native Americans as 'white man's footprint' because it thrived in the high traffic, compacted ground around European settlements. It would seem to have good resistance to being trampled upon, sadly one could argue this was not the case for the native Americans themselves. 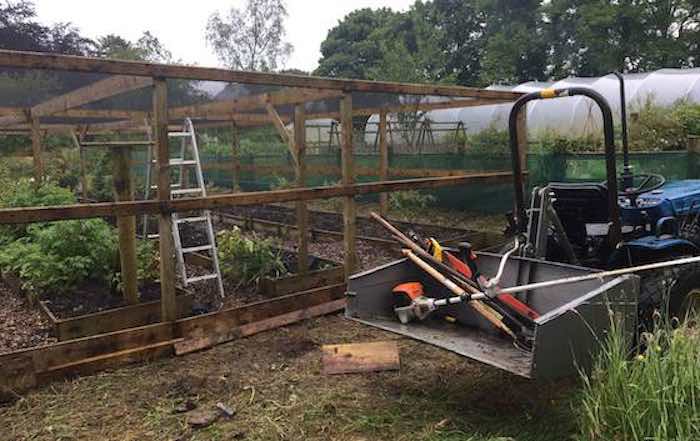 While I'm showing off pictures from my phone I also include a photo of my timber fruit cage which I was re-fixing the netting to at the weekend. I thought I should mention that I roll up the mesh on two opposite sides in the Spring so bees can easily enter and pollinate the fruit. It is generally accepted that bees will go through a mesh of over 12mm (ours is 18mm x 23mm) but I prefer to make it as easy as possible. You need to open at least 2 sides otherwise birds will fly in and get stuck. It is a bit of a performance to do this on a timber framed cage like mine but a lot easier on our new steel version. For those of you who have purchased our new heavy duty kit (thank you), I think I would be inclined to open the side mesh next season to give the bees unrestricted access.