It is incredible just how fast the season slips by, I can't believe it's September already! The final part of the season got away from me a bit (broken collarbone) but luckily work done earlier in the year is still bearing fruit, and plenty of it (too much in the case of the cucumbers). While September will be a busy month harvesting crops like carrot, beetroot, runner beans, cabbage, cauliflower, calabrese, chard and early potatoes, there are a couple of things we can sow now including hardy winter salads like rocket, mizuna, green and red frills mustard, pac choi, tatsoi, claytonia and corn salad. We will be putting garlic and overwintering onions in at the end of the month but that's about it for this season so we should start thinking about preparing the garden for next year. 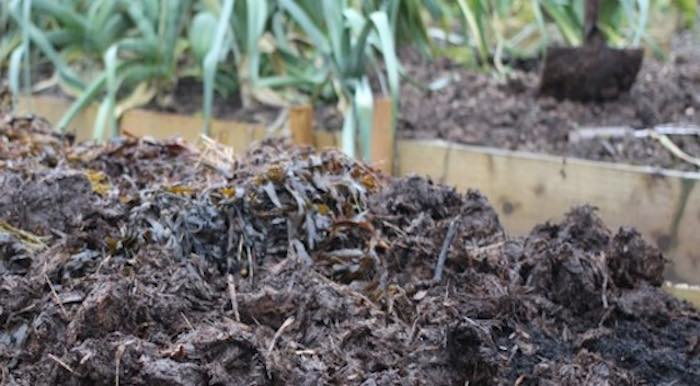 It's all about the soil As crops are harvested and the garden begins to empty we need to turn our attention to our soil, after all, this is what produces the crops in the first place. It's obvious really but when we grow a crop and remove it from the garden we are also removing the nutrients used to grow the crop. These nutrients need to be replenished to grow next year's fruit and vegetables. The best way to do this is to add bulky organic material to the surface of the soil in Autumn and let it rot down over the winter. Your soil is teeming with life (at least it should be) and contains millions of organisms from tiny bacteria up to larger creatures like bugs and earthworms. Adding organic material (and by organic I mean anything that will rot down and become part of the soil) in Autumn has many advantages; it feeds the soil life, it protects the soil from winter rain and, come spring, will give you a fertile top layer to sow or plant into. 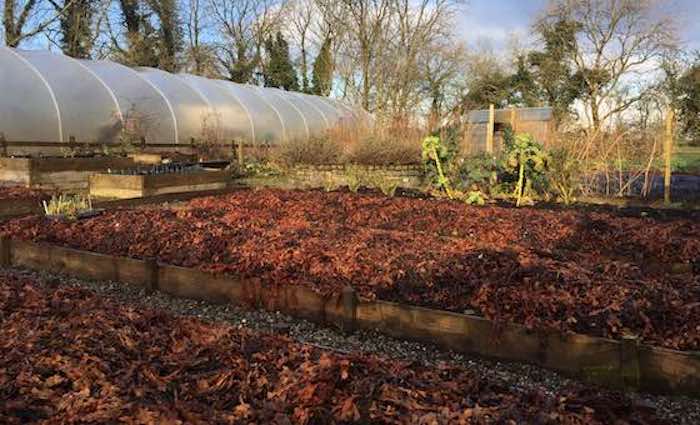 Seasoned readers will be bored to death hearing that I use seaweed (above photo taken last December) but the point is to use whatever you can get your hands on. Good winter mulches include seaweed, good manure, straw, garden compost or lawn clippings mixed with shredded leaves (run your mower through fallen leaves on the lawn). As space becomes available in my garden I will be adding manure (if I can get it) and/or compost covered with a layer of seaweed. I know from experience that if I do this now I will get healthy and vigourous crops next year without having to add any extra plant feed. As I mentioned last week we have a wide range of composts and soil feeds which can be used to feed and protect the soil including envirogrind, organic manure and seaweed meal, I have included some links in the product list at the bottom of the page. 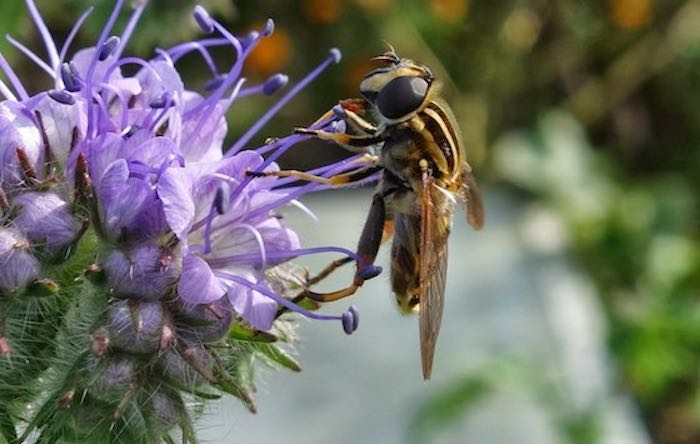 Sowing Green Manures If you can't find something to mulch empty beds with I would sow a green manure crop (e.g. phacelia above) now while it is still warm enough to get some good growth. Green manures will cover and protect bare soil while mopping up any stray nutrients and storing them in their roots. I find the handiest thing is to cut plants back in mid winter and cover with black ground cover plastic until spring. The worms will eat the fallen foliage while the ground cover will cut out any light and give you weed free soil in spring. 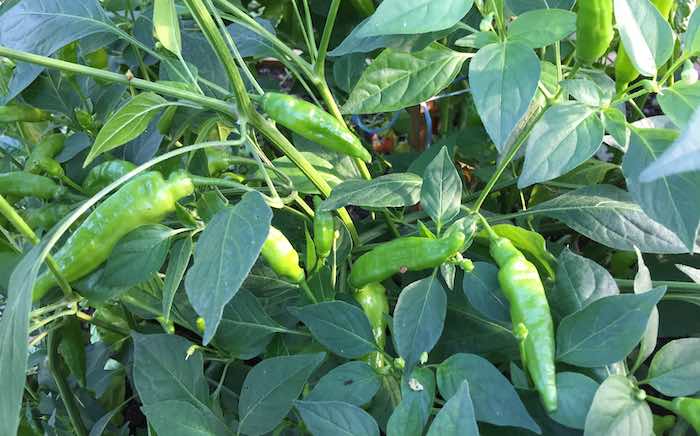 Chilli and tomato suceess Some of you may remember I put a lot of work into my tomatoes and chillis in February/March which has paid dividends; it really is worth transplanting seedlings and re-potting them a couple of times before planting out, the results have been superb. The photo above is a small part of my 'Aji Lemon' plant (known as 'qillu uchu' in Peru where it is a popular seasoning pepper) which has a main stem the width of a child's wrist and must have 100 ripening chillies on it. I munched the end of a green one yesterday (which aren't as hot as the fully ripe yellow peppers) to test the flavour and, while it did have a fantastic lemony finish, it nearly blew my head off. I have another three huge bushes of different varieties so I am not sure what to do with them all, any suggestions would be very welcome. 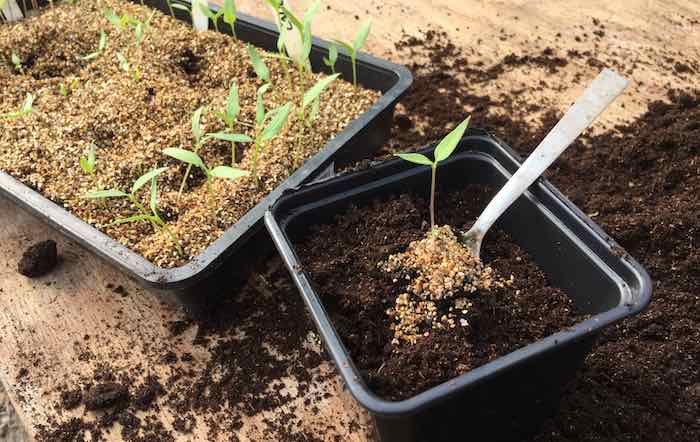 Briefly, the method was to start the Chillis off early (February the 22nd to be exact) in a heated propagator. I used trays of compost and covered the seeds with vermiculite which creates air pockets so helps prevent fungus and insulates against changes in air temperature. The seedlings were transplanted to 9cm pots once they reached the size shown in the photo (a teaspoon is handy for digging them out) before being potted on the 12cm pots later on. By the time they were planted into the raised beds in my tunnel they were impressive plants which had already begun to flower. 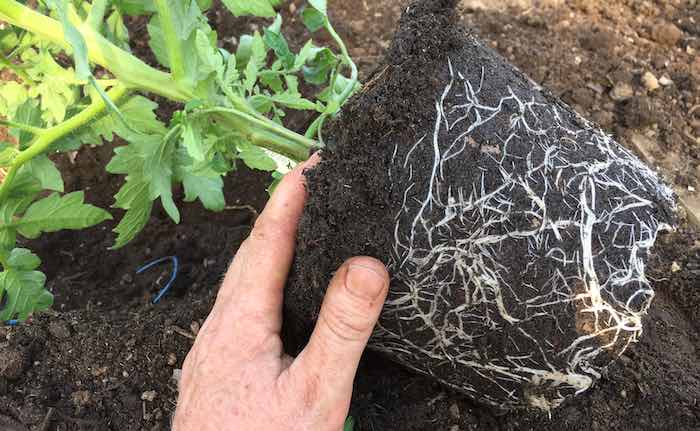 I did the same with my tomato plants (sown in early March) which were beasts with extensive root systems when they were finally planted out in May. The tomatoes were very early on the vines and are still growing very strongly with plenty of life (and fruit) left in them. 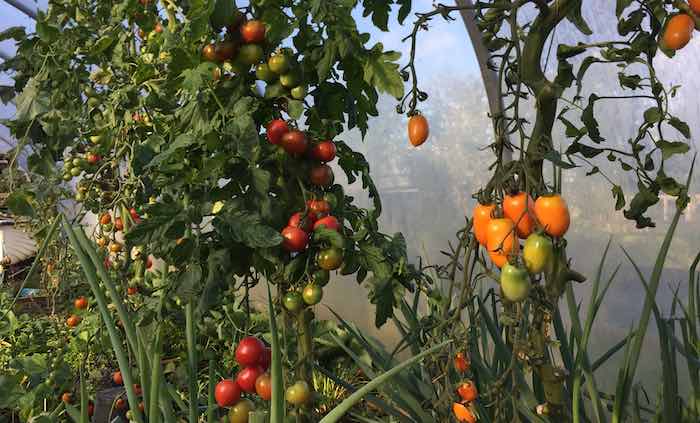 In the above photo, taken on a sunny evening, we have 'Amish Gold' (a cross between amish paste and Sungold) with 'Latah' behind with 'Sweet aperitif' cherries in the background. As you can see I have been removing the lower leaves on the vines to allow more light in to ripen the fruits. As the season draws to a close it is also about the right time to 'stop' tomatoes by cutting off the top of them main stem. Your plants will probably have reached the top of their supports anyway so will be getting unruly. The reason for stopping is we want the tomato to put it's remaining energy into ripening the fruits otherwise you will end up with a quantity of small green tomatoes in mid October which will never ripen. 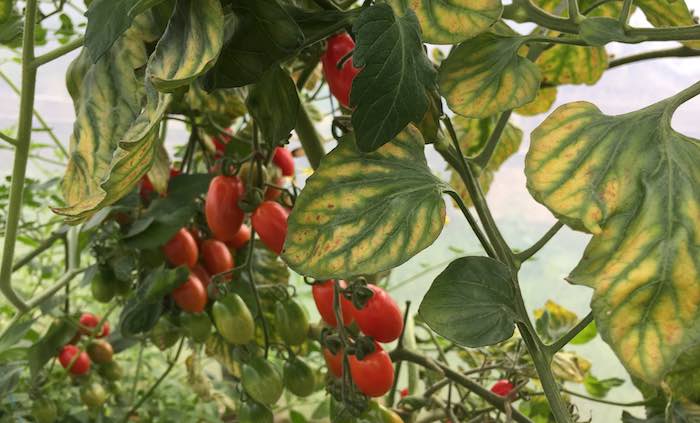 Feeding tomatoes For the above photo either I didn't feed my tomatoes on purpose so I could show you what magnesium deficiency looks like or I didn't get around to it, you can decide. Here my 'Santonio' mini plum tomatoes show classic low magnesium signs where the leaf yellows but the veins remain green. You will see this colouring on older leaves while the new growth looks healthy. Epsom salts is the one you want to replace magnesium which is available from your garden centre, us or from the chemist. BTW, if you're feeling stressed about your tomatoes you can also put some of the epsom salts in your bathwater as magnesium helps soothe your nerves. Everyone's a winner. 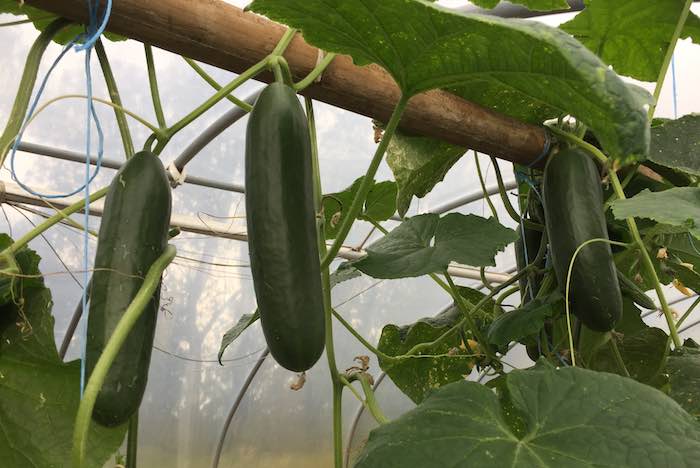 Feeding and layering cucumbers At this stage, if I see another cucumber I'm going to loose my reason. My wife asked me to grow more than one plant as she wanted a lot of cucumbers to make jars of sour pickle. I grew three plants, luckily one of them died, and I have been left with two. This is all female cucumber 'Passandra F1' which produces huge yields of smooth and juicy fruits, don't grow more than one unless you really like cucumbers. 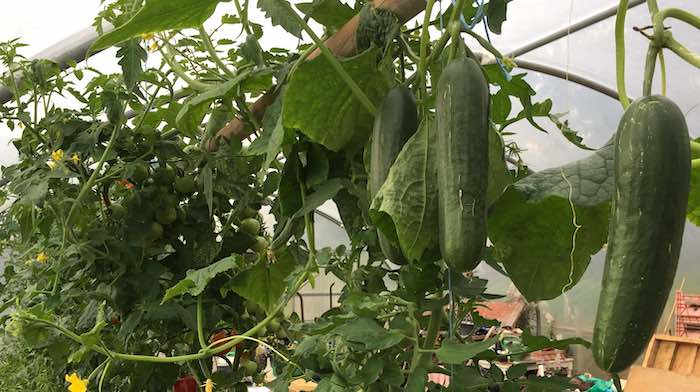 If you want to torture yourself and get absolutely everything from your cucumber plant it will be a good idea to feed them now with a little tomato feed. There is also a good trick called 'layering' which involves removing all the lower leaves from your vine (all the fruit will have been harvested from this portion anyway) and laying the stem on the soil. This only works if your cucumbers are grown up twine and you have an open space beside them. Basically you untie the twine and lower the naked stem onto the soil and cover with good compost. Tie an extension on your twine and re-fix it about 60cm to one side. What was the top of your vine now becomes the bottom with plenty of room to continue growing. The buried stem will produce new roots from the leaf nodes and will be fed by the new compost, this gives a boost to produce another dozen or so cucumbers. I don't have a photo of this technique for you as I won't be doing it. 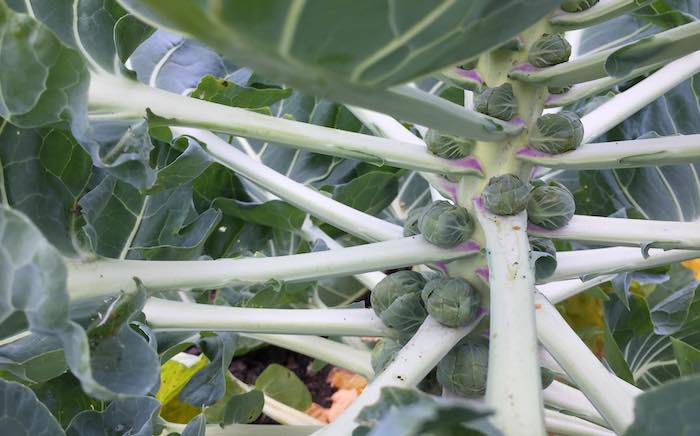 Supporting Brussels Sprouts Here we see Brussels sprout 'Brigitte F1' with little sprouts already starting to form. These plants were started quite early (late March) so are nearly ready to start picking. I have later sown plants coming along after them sown in early May so I can harvest from mid September right through the winter. Sprouts need a very firm soil to prevent them falling over so it can be a good idea to put in a supporting stake at this time of year to keep them upright. A bamboo won't cut it, you need a 5cm x 5cm stake and fix loosely with twine. 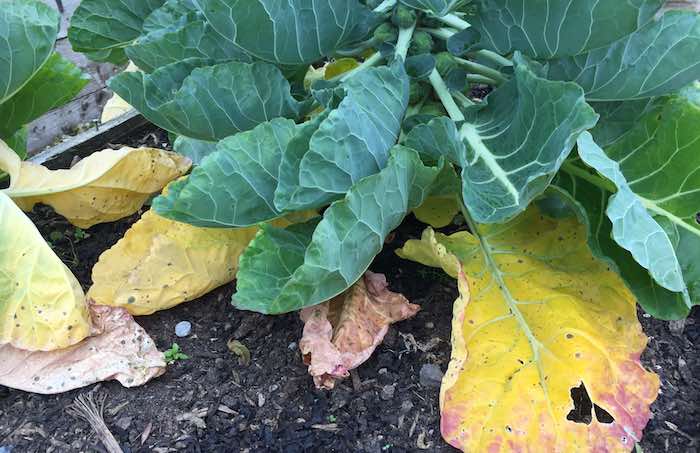 Even though the colours look quite nice you should also remove any yellowing lower leaves from your sprout plants as they grow. The old leaves will attract slugs while removing them increases airflow around the base fo the plants and helps them stay disease free. Mine are looking pretty happy now but if yours are struggling give them a top dressing of seaweed/poultry manure feed to give them a boost. 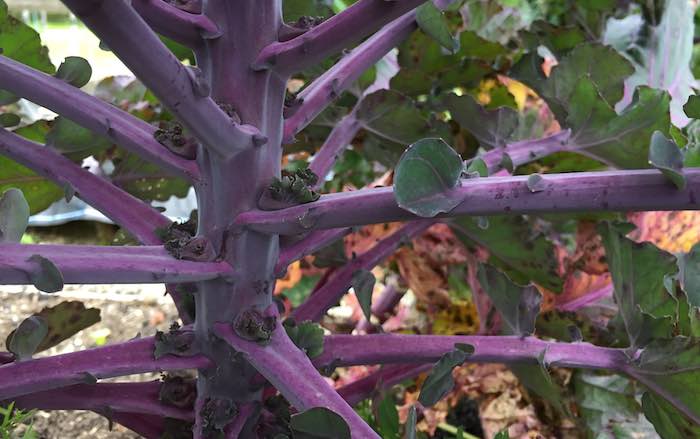 Flower Sprouts You can clearly see the flower sprout is a relation of the Brussels sprout by its branching habit (in fact a cross between kale and sprouts). The harvestable parts are produced in the same way as sprouts, you can see the leafy mini kale plants forming above at the joint between the leaf and the stem. Flavour is very good, just the right mixture between kale and sprouts and very handy to pick what you need, when you need it. The plants are very hardy and will produce all winter, this one I would highly recommend growing next door to their Brussels cousins. 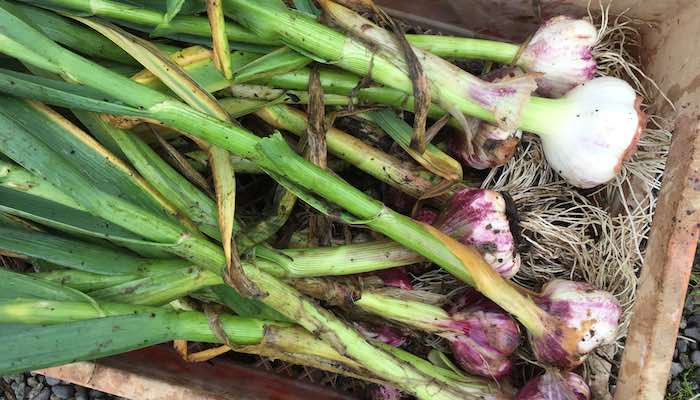 Get your garlic ordered! Don't forget garlic is best planted in early October which is only a few weeks away. We have as much stock as we can coming in but to put it in perspective we already have orders for over twice as much as we had last year. I am giving you the heads up now as we will run out at some stage and I would not like you to be disappointed. I think I included this video a couple of weeks ago but if it's any help to you when garlic planting time comes around, here it is again. That's about it for now, next week we're looking at planting perennial flowers in Autumn for stunning rewards next spring. See you next week! Andrew