Well, it's August again in the Quickcrop garden (and elsewhere I suspect) so I thought we'd take our customary stroll around to see what's growing and hopefully offer some advice on some of my fruit and vegetable crops. It is a wonderful time of year with so much ready to harvest and either eat fresh or process for storage. My latest passion is pickling beetroot with the addition of cloves and bay leaves for extra flavour, I'll cover this briefly below as well as looking at pruning raspberries, harvesting onions and a few other bits and pieces. 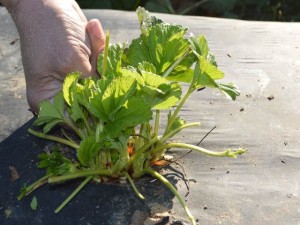 Pruning and propagating strawberries First up we'll look at fruit as my strawberries have nearly finished fruiting and will benefit from a tidy up. At this time of year you can prune back your plants as per the picture by cutting off the leaves to about 3 inches (8cm above the crown). You will also notice that your strawberry plants have produced 'runners' which are one of the plant's methods of reproduction. The runner will grow a new plant at the point it touches the soil so this is your opportunity to pot up new strawberries if you would like to plant up a new bed for next year. Basically you clip a runner into a pot of compost to root a new plant; once the child plant has become established you can cut the runner and move it to a new location. I have made a short video on this which you can see below. 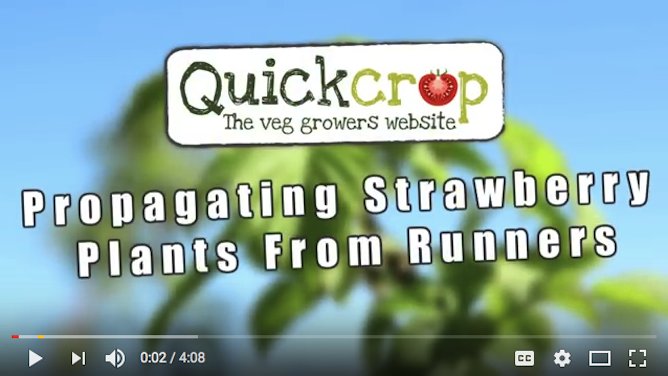 Pruning Raspberries My raspberries have also finished fruiting so it is now time to prune out the old wood and to tidy up new canes if the bush is getting over crowded. Pruning of old wood is much easier to do now rather than waiting until the Autumn as is so obvious which is new and which is old. 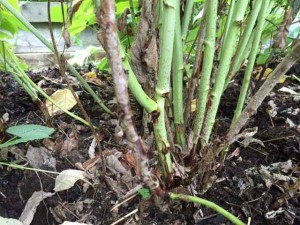 As you can see in the photo the new growth is a vibrant green while the old is brown and woody looking; this will all be brown in the Winter so more difficult to tell which is which. I will be pruning all the brown wood right down to the soil now and also cutting out any excess new green wood to leave 6-8 strong new stems per plant. I will also be removing any new shoots growing outside the 2ft width of my raspberry rows, these 'suckers' are best dug out as pruning will result in more canes where I don't want them. I will leave the tops of the canes alone until February when I will prune them to about 6ft high.

Adding a Seaweed mulch As anyone who reads our blogs or newsletters will know I am a big fan of seaweed as a soil improving mulch and as I live near the coast I make full use of this free resource. I usually head for the shore in October to collect fresh weed deposited after a storm but this year I am heading out with the jeep and trailer a bit earlier. The more time I spend in the garden the more I believe we shouldn't leave soil exposed to the elements. We remove weeds to stop them competing with our crops but we must also accept that we are also preventing them doing their job covering and protecting the soil. In short, it is up to us to make alternative arrangements. 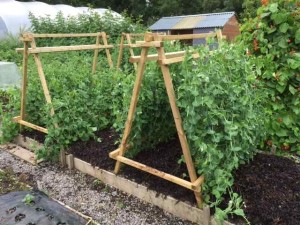 Mulching with any organic matter is an obvious answer as it not only protects the soil but also feeds as it rots down. Seaweed is good because it contains such a broad range of nutrients and because it contains very little cellulose making it relatively quick to break down. Of course seaweed also comes from a completely different environment from your garden so it doesn't introduce any weed seeds, pests or disease likely to affect your vegetables. You can see above and below how I have covered the soil between my pea frames and around my new boysenberry plants (they both seem pretty happy) which makes them look neat and tidy but also means I don't need to keep weeding. As I said, I usually collect seaweed in late Autumn allowing any salt to be washed out by Winter rain before I plant anything. I haven't added large amounts around growing crops before but will be very surprised if salt is an issue. I'll let you know if it turns out despite my gushing about this wonder weed I have ended up killing my peas! 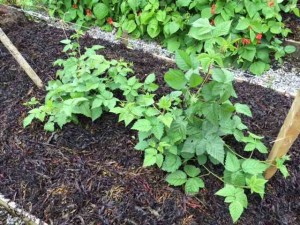 Anyway, I am sure you are fed up with me going on about it, especially if it is something you can't get your hands on. I have, however, been making some enquiries to see if we can supply tonne bags of fresh seaweed to landlocked or city gardeners, It will take a bit of leg work to sort this out but if the demand s there it may be something we can provide. Please email me at quickcrop@gmail.com if this is something you would be interested in. 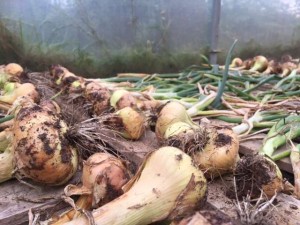 Harvesting and drying onions My onions were a mixed bag this year which I'm putting down to planting too late and using the last of the onion sets we had in stock. It really does pay to use the roundest, fattest sets you have so achieve a beefy and uniform crop. I planted some less than perfect sets on purpose and as you can see from the photo there is a huge difference in the finished onions despite them all growing in the same conditions. You will know when your onions are ready to harvest when the foliage stats yellowing and falling over. For Spring planted onions this will be in early to mid August but in a wet year ripening can be delayed. You can speed up the process (in a wet year it is a good idea as they may rot on damp ground) by gently tugging each onion to break off some roots, you can then harvest them 2 weeks later. 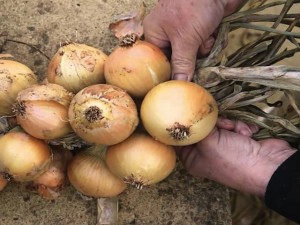 Don't remove the stalks when you harvest your onions or you will greatly reduce their storage time. Leave them to dry in the sunshine if possible (chance would be a fine thing round here), if not lay them out on pallets or mesh in a greenhouse, polytunnel or sunny porch. Once properly dry (in about 4 weeks) you can use the stalks to make attractive French style plaits and hang in the kitchen or a frost free shed where they should keep till the following March. 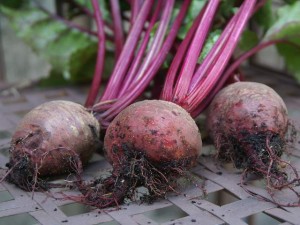 Harvesting and Pickling Beetroot Beetoot is one of my best friends in the garden as we get so much out of it using it for juicing, grated in salads, roasting, baking and my favourite, pickling. Beetroot is very easy to grow in a fertile soil, suffers from very few pests or diseases and is relatively quick to mature; it can still be sown or planted now for a late Autumn crop and will store very over winter in boxes of damp sand. Thanks to one of our staff for giving me some of her preserved beetroot to try (it was delicious) and sharing the following recipe, I have launched myself into full pickle production. There is a huge difference between homemade pickles and the stuff you buy in the supermarket because you have more control over how it is cooked and what you pickle it with. The recipe includes cloves, bay leaf and onion mixed in with the pickling solution and gives a breadth of flavour far more subtle and exciting than the standard jar of vinegary beets we are used to. 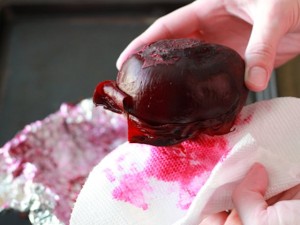 Making pickles is easy, and I mean really easy, so give it a go if you enjoy the flavour. It is a very satisfying way of storing you Summer bounty for Winter use. Here's what I did: Boil 6-8 tennis ball size beetroot in a water for about 20 minutes. I boiled them for slightly less time than recommended because I like the beets quite firm but you can put them in for 30 mins if you prefer. Leave at least 2 inches of stem on the beet by twisting rather than cutting them off as they will bleed less in the water. Once boiled you can easily peel the skins from them before slicing or chopping them to your desired size. 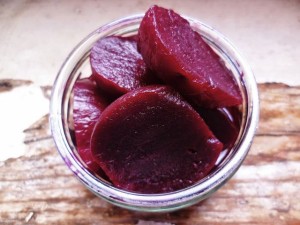 To make the pickling solution mix the water, vinegar, salt and sugar and heat so the salt and sugar dissolve, there is no need to boil it. Fill sterilised jars with sliced beetroot, add 2 or 3 cloves, a bay leaf and a slice of onion and fill with the pickling solution to the top. Have a look around the jar at this point to see if there are any air pockets between the beet and the glass, poke a clean knife down the inside and they will bubble to the top. 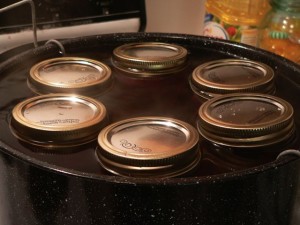 Screw the lids on the jars tightly and place them in a large pot of water with the water level about 2/3 of the way up the jars. Boil the water for approx 30 mins to sterlise the jars, the lids should all puff out a little if they are sealed properly. Remove the jars after 30 mins and allow to cool. The lids should compress again and end up slightly dished, store any that don't in the fridge and use first. Sorry, I should have said: To sterlise the jars beforehand put them on a baking tray and place in a hot oven for 30 mins, boil the lids at a rolling boil for 10 mins. 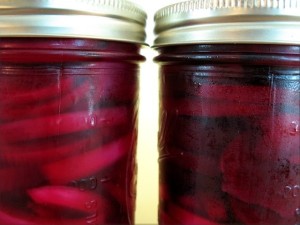 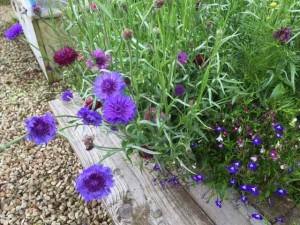 Adding flowers to your crop rotation This year, as you may know, we delved into supplying annual flower seedlings as well as vegetables. Our tunnels are right beside my vegetable garden (there are pros and cons of having some of the business run from my house) and this meant I had a ready supply of flowers to stick into any empty patches in the garden. The above photo is an artfully composed corner of one of our bench beds which has aged to an attractive silver and makes a beautiful contrast with the blue cornflower and delicate alyssum spilling over the sides. I will admit I don't know much about flowering plants, my gardening has thus far been dictated by my stomach rather than my artistic sensibilities, but I am really enjoying the splashes of colour that make the vegetable garden a sparkier place to be. 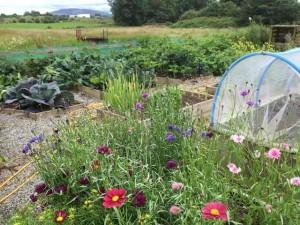 If we come back to the point about avoiding bare ground for soil conservation and weed control you start to realise that apart from their visual appeal and the fact that they attract beneficial wildlife, flowering plants can also be used to protect your soil. I am already feeling giddy about next year when I will be deploying my petaled foot soldiers to all corners of the garden to colonise any unclaimed territory. The bursts of colour will make everything look great while some of my soil gets a rest form the high demands of vegetable growing. The flowers also keep weeds at bay and stop nutrients being washed through the soil with their protective cover. What's not to like? That's it for now, I hope you enjoyed my August garden tour, see you next time! Andrew