West Cork Garlic is a new enterprise which has undertaken the risky business of growing garlic commercially in the Irish climate. Axel and Marye Miret of Enniskeane, County Cork, started off with a pilot scheme in 2011. The success of the scheme led to their founding their business and planting 8,000 bulbs for the 2012 season. They sold their crop in farmers’ markets and through retailers in West Cork; this has enabled them to expand the business and to plant over 40,000 bulbs last Autumn. They hope to be able to offer you nine different varieties of seed garlic, including elephant garlic, later this year. 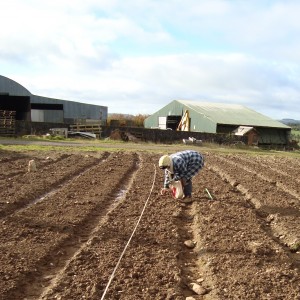 Planting, harvesting and weeding are all done by hand, to protect the bulbs and minimise the use of chemicals on the crop. However, a crop of 200,000 bulbs will be necessary to make the business viable and produce an income, so the intrepid pair are investigating ways of lightening the workload without compromising their standards. “The vast garlic industry on the continent uses heavy machinery which would not be appropriate here, even if we wanted, and could afford to use it,” said Marye. “We are looking into developing a system that works on a small scale, that is still fairly labour-intensive, but which speeds up the work and makes it physically easier.” So what was the reason behind the founding of West Cork Garlic? “I’m an artist by profession,” says Axel, “though, oddly enough, my vocational training was in agriculture. I’d been making a living from my art for many years until the recession began. In this situation, the fine arts are the first to feel the pinch. I hated being on welfare and was very keen to find some form of work. It was my wife who suggested growing garlic as we had been growing it successfully in our garden for years. At first we thought of it on a small scale on our acre as a supplement to my income, but after attending a Start Your Own Business course we realised there was scope for something bigger. We were lucky to find a local arable farmer who is supporting us by renting us land and doing some of the heavy work, such as ploughing.” 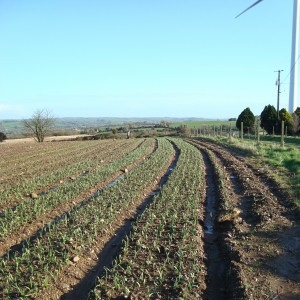 The Mirets are very keen to encourage people to grow their own garlic and have a page of information on the subject on their website, www.westcorkgarlic.com. You can even grow garlic in pots: plant four cloves to a six-inch pot. “We’re passionate about ‘growing your own’. Even if you only have a windowsill, try growing a few herbs. There’s a great sense of achievement in growing a food crop on however small a scale and it seems to have the added benefit of making people more aware of the quality of what they’re eating in general. We need to have more control over what we eat and that pot of basil or parsley is a beginning.” A tip for February? Garlic loves potash, which keeps it healthy and increases its storing qualities. Give it a feed this month. If you have wood ash (not coal or peat) from your fire, this is ideal.