Wheatgrass is a tricky one to pin down. Many people I've spoken with swear by it while others will dismiss it as utter nonsense. It is claimed to be an energy booster, and a detoxifier, to be beneficial in controlling bowel cancer and helpful for patients undergoing chemotherapy. It's something which has seized the imagination of natural food proponents around the world with wheatgrass juice a common sight in juice bars and healthy food shops and cafes. The nutritional content of wheatgrass is broadly similar to other leafy greens like broccoli and spinach, it is higher in vitamin E but lower in vitamin C than broccoli and slightly higher in protein then spinach but lower in potassium. It's a mixed bag. The best I can say after researching it is it's not actually bad for you. So what's the big deal? I met Gabby Wieland of Neantog at the GIY gathering (you should go) last year and I thought brilliant!, there's just the person to ask. Gabby talks like she's just taken her finger out of an electrical socket anyway and is someone who appears to have so much energy and vitality you'd have to say "I'll have whatever she's having". 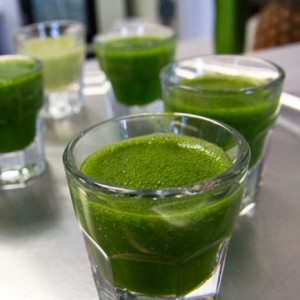 What's she having? You guessed it, wheatgrass juice (as part of a balanced diet). I tried to play devils advocate by pointing out many of the claims hadn't been substantiated by Gabby seemed unphased. "I know" she said "but I get such a jolt when I drink it and feel so fantastic, there must be something in it". N.B. it's been a year since I had this conversation so they may not be her exact words but it that's the gist of it. I have a couple of reasons for giving it a go, the main one being curiosity, but I'm also thinking it can be easily grown indoors in the Autumn and Winter and will be handy as concentrated fresh greens when all around is cold and brown. I have tried wheatgrass a couple of times from a juice bar and can confirm it tastes pretty much like grass, not a great selling point unless you're a cow, but I did feel pretty good afterwards. Anyway I was happy with my quick trial so have decided to give it a go at home. Wheat Grass is just what the name suggests; it is the grass part of the sprouted wheat seed. You can also use barley and oats which will give you pretty much the same result. The idea is to sprout and grow the seed till just before the jointing stage or when a second blade of grass appears. Use hard winter wheatgrass seeds and soak overnight for 8-12 hours. The handiest way to do this is use a jam jar with a light gauze or muslin fixed over the top with an elastic band. Rinse the seeds 2 or 3 times with cold water, they can be easily drained through the muslin filter. 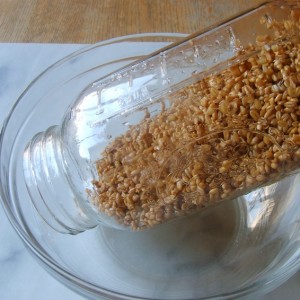 The wheatgrass seeds then need to be sprouted, you'll use the same jar, just rinse the seeds twice a day and drain. Place the jar at and angle upside down to drain off any excess water, a medium sized bowl is handy for doing this. You should see little sprouting tails emerge from the seeds in about a day and a half depending on temperature. Once the seeds have sprouted they will need to be placed on a tray of moist compost to grow on. I have used seed trays for this as they have drainage holes and are a perfect size. Fill the seed tray with a layer of compost about 2 inches deep (you don't need much as they won't be in there for long) and spread your sprouted wheat seeds evenly across the surface. One small cup of seed is sufficient for one tray of finished wheatgrass. You need keep the sprouts in the dark and prevent them from drying out and to do this place a wet tea towel over the tray. Place the tray in a dark place for 2 days until the wheatgrass shoots have started to lift the cloth. Don't let the cloth or the sprouts below dry out, I found a little hand sprayer / mister perfect for this job. Check on them twice a day. 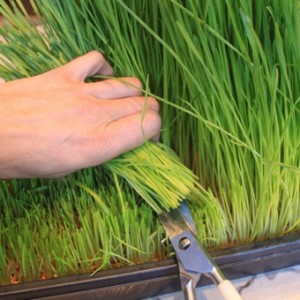 After 2 days your wheatgrass seedlings will be 3-4 cm high and yellow looking, they need light now so you can place the tray on a windowsill to grow on. Let them grow for 3 or 4 days again making sure they don't dry out. You will be ready to harvest when the grass begins to fork or 'joint'. Wheatgrass is best juiced and isn't exactly a taste sensation so is best mixed with a fruit juice to make it more palatable. You can also keep a wedge of orange or lemon on the side tequila style if you like. The best value juicers we've found (which of course we stock) are the 'Lexen' hand juicer and the 'Lexen' electric juicer. Both work well and are easy to clean which is a big plus with juicers. Both juice a broad range of fruit and vegetables with the hand juicer being a great value starter juicer at only €34.95. Lexen Manual Juicer €34.95 Lexen Healthy Electric Juicer €139.00