If you don't have a patch of soil to grow in then clearly you will have to grow your vegetables in a container of some sort. A container grown urban garden adds life to your balcony or back yard and of course supplies you with your own delicious home grown veggies!

To pick a great crop in any garden you need to start with the soil. This is even more important with container growing as everything your plant needs to survive comes from inside the pot. Food crops are much more demanding than a planter filled with flowers and will need much more feed to produce a decent crop.

In general a multi purpose compost will only sustain your plants for 5-6 weeks so you will also need to use a feed to avoid a disappointing harvest. Remember, when we remove our vegetables to eat we also remove the nutrients from the soil (the plant has used these to grow) so we have to replenish the compost for the following crop.

I'm going to go through the products we've tried and tested and which we find to be the best. Yes, it's true, we also sell them but I guess that's what our site is all about, finding and supplying products that we like and that actually work. So, first up: 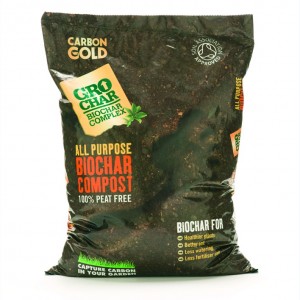 Carbon Gold 'GroChar' Peat Free Compost As compost goes this is a little expensive but in our opinion it's well worth it. What is GroChar and what advantages does it have over other composts?

GroChar compost is a mixture of Coir, Biochar, mycorrhizal fungi, seaweed and worm casts which I guess I should explain:

Coir Coir (usually pronounced coya) is the fibrous material between the hard outer shell and the outer coat of a coconut. It's long been a replacement for peat with organic nurseries but is now becoming more widespread as the use of peat is increasingly frowned upon. Coir is a sterile substrate and just like peat compost doesn't contain any nutrients. It is basically the base for your seed or multipurpose compost mix. 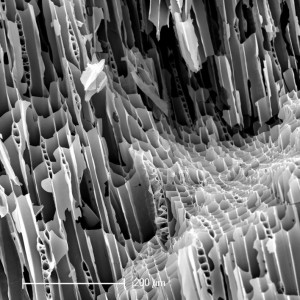 Biochar Biochar is charcoal which has been produced by charring woody material at a low temperature. The result is a fine grained, porous charcoal which acts like a sponge and greatly improves the water holding capacity of soil or compost. This has added benefits as it also holds on to soluble nutrients in the soil which can then be released to the roots of your plants.

You can see the fibers in charcoal in the photo and how they act as little storage chambers but here's the other cool bit, they also act as tiny hotels for the beneficial microbial life in your soil!

Don't view this as a fertilizer, it isn't. It's more of a facilitator by holding moisture and nutrients and by housing your little soil friends. 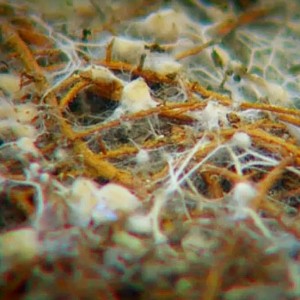 Mycorrhizal Fungi Mycorrhiza is a mutually beneficial partnership between plants and soil fungi that has existed as long as there have been plants growing in soil.

The fungi produce a vast network of filaments that retain moisture and naturally unlock minerals and nutrients making them available to the plants. It also actively fights soil diseases and parasites, it's a bit like an extra root system for your vegetables which feeds and protects your plants.

Mycorrhizal fungi exist in soil which has been left in its natural state but is broken up by ploughing or digging. This is the main reason behind the 'no dig' movement as digging your garden every year breaks up these important networks.

Clearly a container won't have any mycorrizal fungi in it as you clear it out every year so it makes sense to either add it or use a compost like GroChar which already has it in it.

Seaweed Besides containing all the major and minor plant nutrients seaweed also contains growth hormones (auxins, gibberellins, and cytokinins) which are readily taken up by plants and put directly to use helping cell division and stem elongation. Additional effects on plants are improved seed germination, increased nutritional value, more extensive root systems, and greater resistance to pests like nematodes.

Wormcast or Vermicompost Wormcasts are what comes out the other end of a worm. It's rich in humus and full of easily absorbed plant nutrients. It is a very gentle slow release fertilizer and won't burn fragile new root systems so ideal for use in a seed or potting compost.

GroChar is also available as an soil improver additive to make your own compost or to add to planters already in use. The compost and soil improver is available in the following sizes from our webshop: 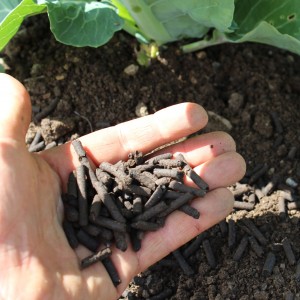 Seamungus Seamungus is an Irish made product which came on the market a couple of years ago and has since become something we can't live without. It's made from free range chicken manure, sustainably harvested seaweed and humic acid to make the king of all natural pelleted feeds. It's a rich dark colour and is far superior to standard chicken manure pellets.

It's perfect for container growing as it releases nutrients slowly over a 3 month period and as long as you don't overdo it won't burn the roots of your precious veggies. Mix a handful into your compost mix for a sustained 3 month release of nutrients. 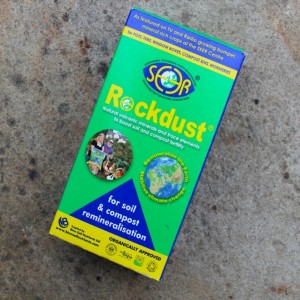 Minerals can be the difference between average and bumper crops and crucially for the kitchen gardener, also add flavour of your produce. Rockdust contains 0ver 70 minerals in a powdered form which can be mixed into your potting compost before you sow or plant. We'll be running some trials this year on the differences between container plants grown with or without rockdust and will keep you informed.