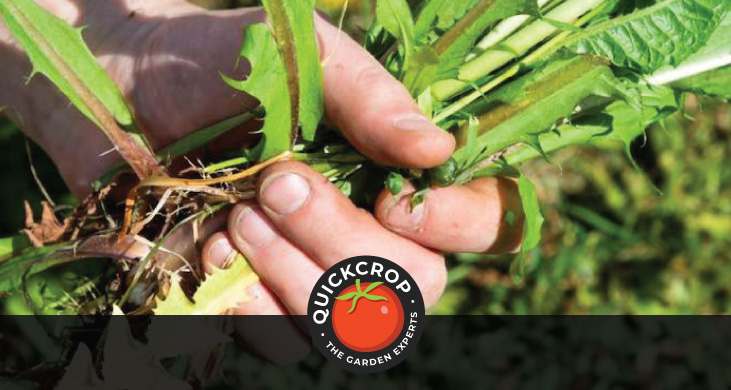 Weed control options
If you saw the state of my garden right now you would laugh your head off that I have the cheek to talk about weeding, it has never looked so bad (too much wandering around, not enough work going on). I will pay heavily for this lapse in years to come as the familiar old saying 'One year's seeds, seven years weeds' comes into play. Annual weed seeds, once spread, will result in weed seedlings for years to come so it does pay to keep on top of them.

If you follow Charles Dowding (and if you don't, you should) who is a meticulous weeder of his large vegetable garden you will see that, over time, the soil weed seed bank becomes exhausted and very few new weeds re-appear. I remember seeing some photos he took of a patch of ground he had kept weed free for a number of years and had then left to it's own devices, it took a surprisingly long time to be colonised again which shows how much weed growth comes from weed seeds that are already in the soil. 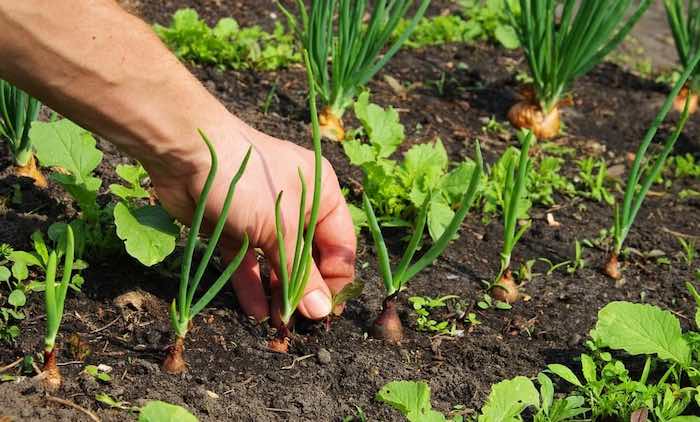 Annual, biennial and perennial weeds
Most of you will know this already but, for the benefit of new gardeners, there are three main types of garden weed that you will encounter, annual weeds, and perennial weeds. Annual means that the weed completes its full lifecycle in one year, a biennial (e.g. the thistle) grows leaves and stems only in the first year and flowers and seeds in the second. A perennial, as the name suggests, is a perennial nuisance as it comes up every year from the same root which has survived the winter below ground.

As regards dealing with the different groups, you only need to concern yourself with annuals and perennials (biennials are dealt with in the same way as perennials) but you will need to employ a different method for each.

Annual weeds
The key thing with annual weeds is to get them out before they have a chance to seed. This is because their method of propagation is to produce a large numbers of seeds and then die off, the next generation grows the following year from the current year's seed. The fact that the plant can't survive the winter means that they need to produce 1000's of seeds to ensure there is a high enough chance of some of them germinating and producing seed bearing plants the following year.

The good news with annual weeds is that they don't have deep root systems so they can be very easily plucked from loose soil or hoed off. If you are using a hoe on a dry day, you don't need to pick up annual weeds as they will die off once their roots are out of the ground. Also, because they contain very little cellulose, they will shrivel up to almost nothing very quickly so it will look like you have tidied them up anyway. 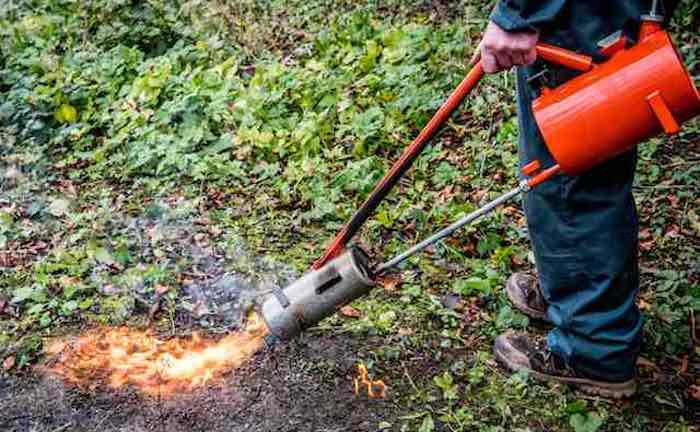 If you are clearing or have cleared an area of annual weeds which have gone to seed it is a good idea top try to kill off the weed seeds which will have been inevitably scattered all over the soil. This is going to sound very extreme but if, like me, you use a flame weeder instead of weedkiller, give the soil a quick once over with the flame. Provided you don't linger too long, the heat will be enough to kill the seeds but won't penetrate past the soil crust so wont do any lasting damage. This will do a lot to reduce the seven year curse. 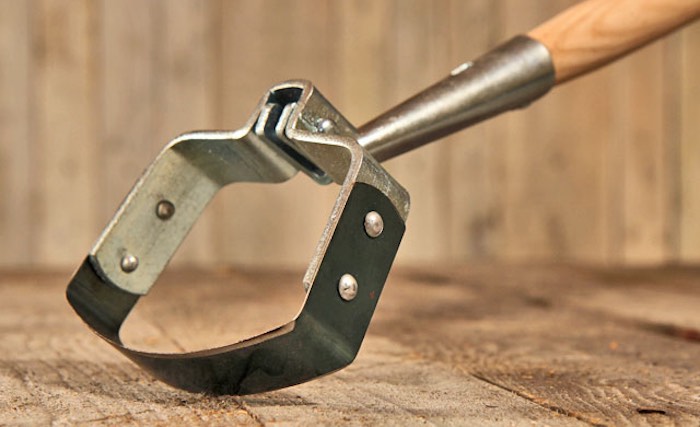 You have seen me mention this tool about 40,000 times now but let's just say there are hoes and there are hoes. The oscillating hoe is the easiest hoe to use in vegetable beds as it takes very little effort, cuts on the push and pull stroke and stays razor sharp. It is also a proper lifetime tool made in Austria from galvanized steel with replacement blades available should you break it or wear it out.

View the Stirrup Or Oscillating Hoe

If you would like some help identifying annual weeds, I wrote a blog post a couple of years ago which includes photos of quite a few of them, you can view the post by clicking the blue button below. 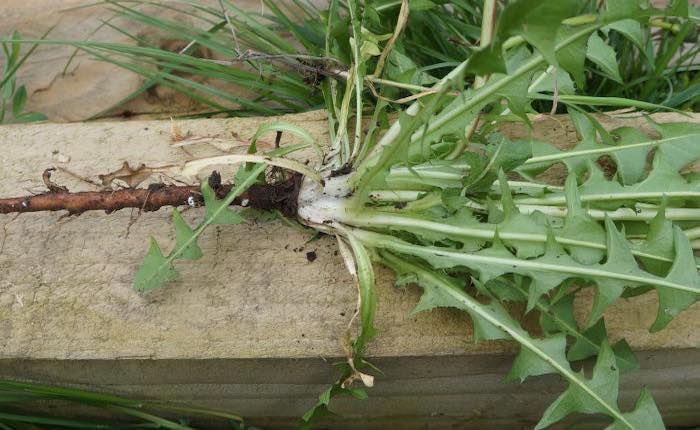 Perennial weeds
As you can see in the dandelion image above, perennial weeds have deep, energy storing tap roots that enable them to survive the winter with very little foliage above ground. Unfortunately for us it also enables them to quickly sprout up again after we hoe the top off so they can be difficult to control.

If you are intending to cultivate an area of ground with a lot of deep root weeds (and don't want to spray with weedkiller), the easiest and most successful method is to cover the area with a thick layer of cardboard or landscaping weed membrane to block out all the light. It is often said that the upside of using cardboard is that you can plant a crop straight away but this is only if you have enough compost, rotted manure or weed free soil to cover the cardboard and give sufficient depth for the crop to grow. You will need a lot so I am not sure this is viable for most people.

The plastic weed membrane might not look that great for the year it needs to be on (enough time for deep root weeds to use all the energy in their roots and die) but it will definitely work and leave you with a nice clean patch to work with. 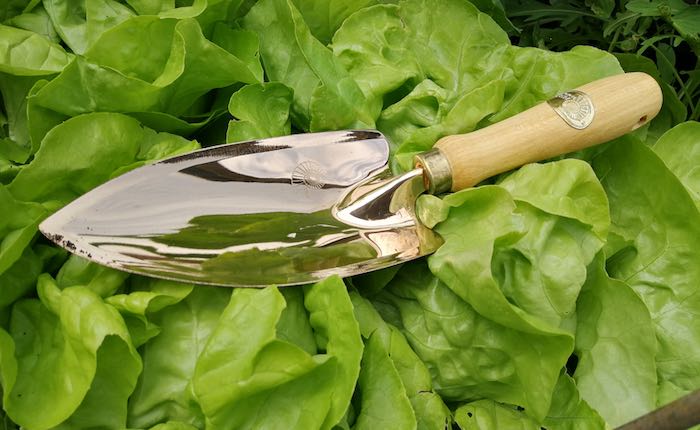 For day to day weeding, just carefully dig the roots out, removing as much as you can. I use a PKS 'Castor' copper trowel and can genuinely say it is the best trowel I have ever used and I'm not just saying that. The sharp, pointed blade seems to slide into the soil much easier than any other trowel which makes hand weeding so much more pleasant.

These trowels are very expensive (€47.95) but are well worth it in my opinion as it will never break and will become a treasured tool. You'd be lucky to get a good dinner these days for €47.95 and that's usually gone in under an hour.

I have also put together a short article on perennial weeds with photos, again you can view it by clicking the button below. 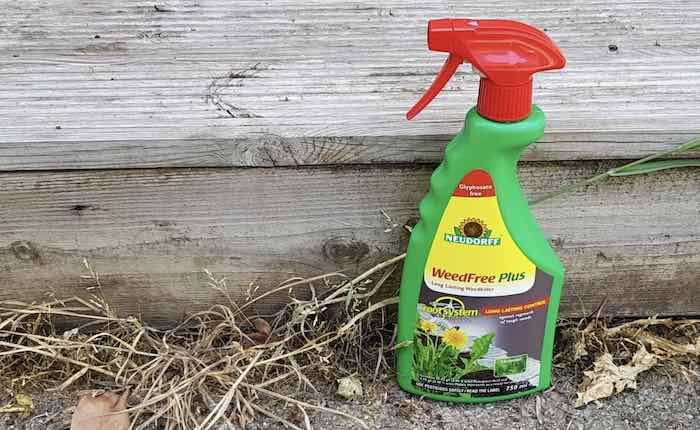 Organic weedkillers
As glyphosate and other weedkillers harmful to the environment decline in popularity, new less damaging solutions have come on the market. Some are better than others. Most of the bunch contain acetic acid (vinegar) which is fine as it kills off foliage pretty effectively but it isn't as good at killing the roots. One of the reasons why Roundup or other glyphosate weedkillers are so effective is that they are systemic so are taken in by the leaves and transported to the roots thus killing the whole plant.

I think so far that the best all round option for an environment friendly weedkiller are the products made by the German company Neudorff. They use a systemic mix of pelargonic acid and maleic hydrazide which does seem to offer a longer term results especially when given two applications. I'm not sure any weedkiller has a place in the vegetable garden but, if you have paths that are getting on top of you, the Neudorff product range does provide decent environment friendly options.