I can't tell you how much of a relief it is that the weather has warmed a little and that there is no frost forecast for this week. As you may know I am filming our new vegetable growing course this year which means all the crops I sow must, at the very least, survive and should, ideally, give me something I can pick and eat at the end. As you can imagine a freezing cold start to the year is not terribly helpful. 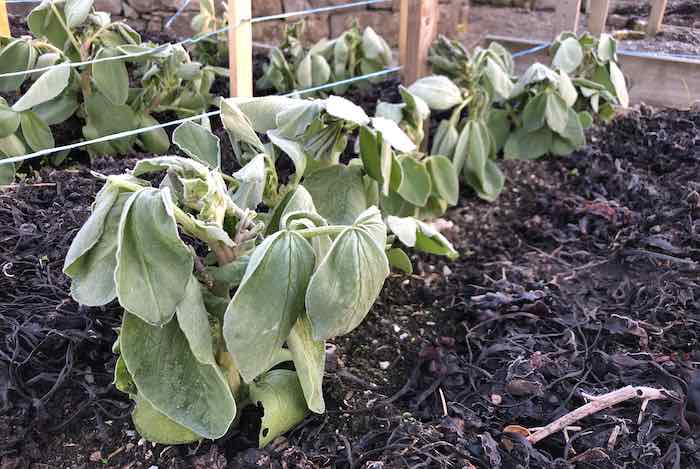 Hardy Broad Beans - Sow Feb to April, Oct to Nov for overwintering. As you know from previous mails, I have been covering seedlings planted outside with fleece to protect them from frost and cold weather. So far, all have survived but there has been very little growth due to the cold but I am expecting all that to change this week. The photo above shows my hardy broad beans (Witkeim Manita) on a very cold morning last week, the thermometer said minus 1 but the garden had the look a much harder frost during the night. If anyone can explain how a 'soft' (rather than woody) plant like broad bean survives frost I would love to learn more about it. Seemingly it is to do with fatty acid desaturation of membrane lipids but while I had no trouble writing those words I am not 100% sure what they mean. 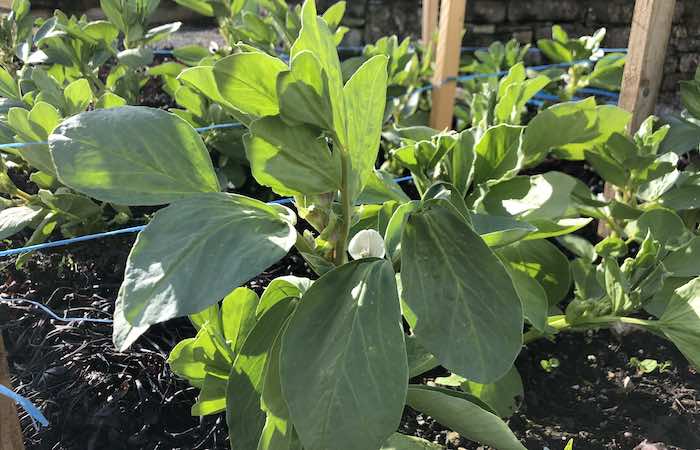 You would be forgiven for thinking the frozen, wilted plants in the first picture would not survive but the second photo is the same row of plants in the afternoon of the same day! I would make the point that this level of frost resistance and recovery is the exception rather than the norm, there are very few plants I would allow to tough it out unprotected but early longpod broad beans (Witkeim Manita is one of many longpod types) are astonishingly hardy. 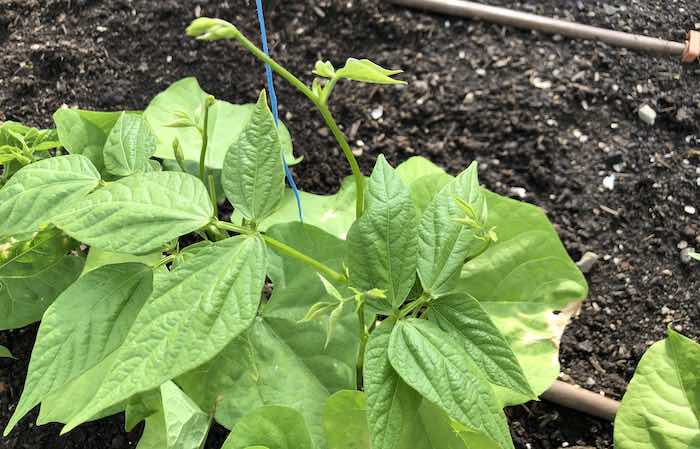 Non hardy French and runner beans - Sow May to June While broad, French and runner beans are all members of the Legume family they couldn't be more different in terms of their ability to survive cold weather. Broad beans (or fava beans if you are Hannibal Lecter) are members of the genus Vicia (vetches) which are native to many cooler parts of the world including Northern Europe; French beans and runner beans belong to the genus Phaseolus and are native to the warmer regions of South America so cannot tolerate any cold. Runner beans are a little hardier than French beans but not much, unless growing indoors it is best to sow at the end of May as the lightest touch of frost will kill them and cold weather will significantly set them back. I can't grow French beans outdoors but runner beans will do well in a good Irish summer as they also need a lot of moisture. 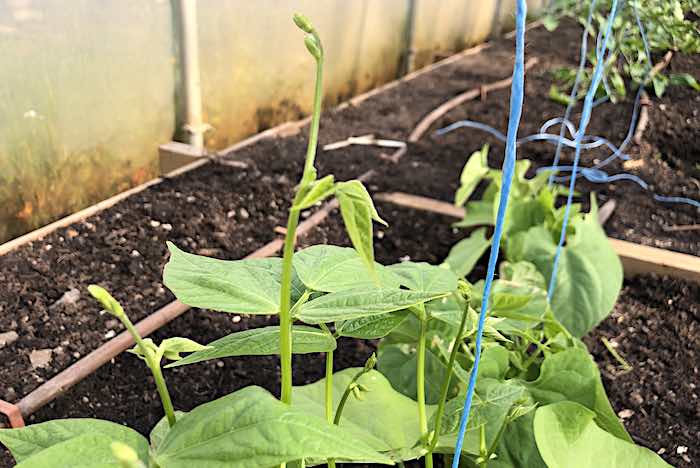 I had a tense time with my polytunnel planted French beans (I had planted them in the beds 10 days ago) over the cold period as, despite being wrapped in fleece at night, they just sat there sulking with very little growth. You can see some cold damage on the lower leaves (crispy brown patches) in the photo but thankfully they all survived. French or runner beans simply won't grow until the soil temperature has reached around 20˚C but once the soil had warmed after a sunny weekend they suddenly burst into life and started heading skywards. I am using a single length of twine buried under a group of 3 or 4 plants; you don't need a support for each plant, once they have found the twine they will all scramble up together. 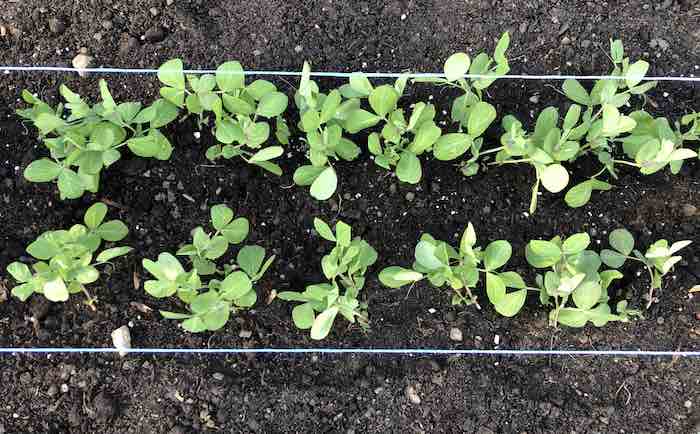 Planting Peas - Sow March to mid May Peas, as I am sure you know, are also members of the Legume family and while they are not quite as hardy as broad beans, they are still one of the earliest crops you can sow. I sow in modules and plant out later as direct sown crops are often eaten by mice. The most common beginners mistake I see is not sowing or planting peas densely enough and ending up with a thin covering of lonely looking pea vines. If sowing single peas or planting single module grown plants, the distance between each should be 5cm. If planting multisown modules (as I am above and below), with 2 or 3 peas in each cell, the planting distance should be 15cm. 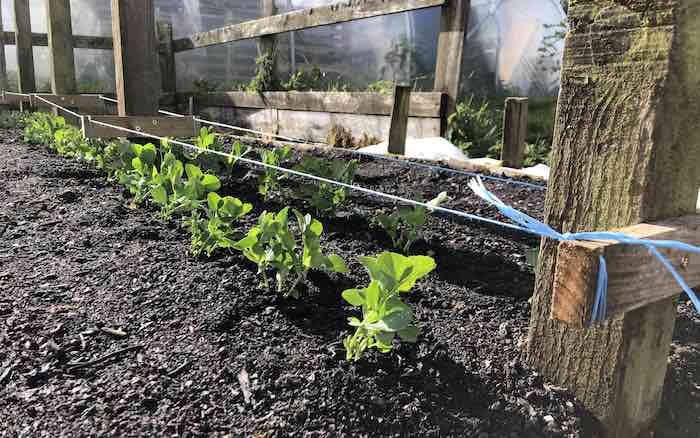 I sow or plant in double rows 20cm apart along the centre of the bed in a staggered pattern which will give a nice full wall of vines and, hopefully, plenty of peas. If you are sowing more than one double row, the distance between them is the same as the height of the pea variety. For example, the three varieties I am growing are: 'Greenshaft', 'Shiraz' and 'Carouby de Maussane' which grow to a height and have a row distance of 75cm, 120cm and 150cm respectively. You can see in the image above that I have fixed low support lines just above the peas which I will use to guide the peas into the centre of the row. Thereafter I will attach more horizontal lines at 25cm intervals as the peas grow up the support. It's important to remember that, unlike climbing beans, peas are not good at climbing vertical poles so either need a sqaure mesh or numerous horizontal supports. A fully grown wall of peas also make a very effective sail so ensure the support posts are well anchored in the ground. 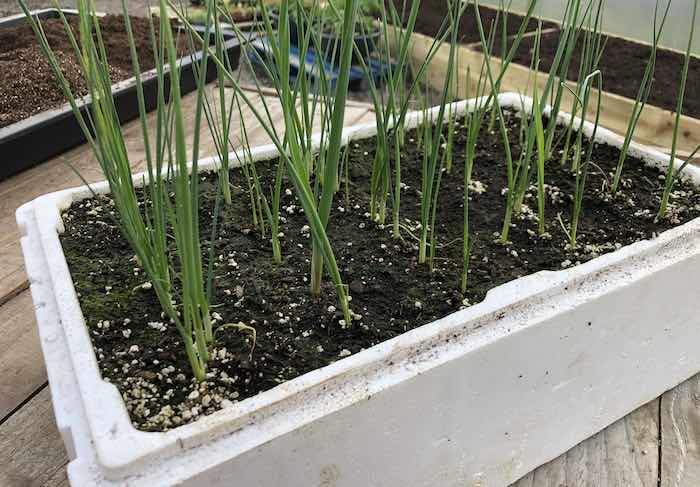 Leeks in fishboxes - Sow late winter leeks in early May. You may recall I sowed winter leeks in fishboxes towards the end of March and have had them growing in the polytunnel since. I normally sow all my leeks the lazy way (2-4 seeds per cell in modular trays and plant out together) but this year I am also growing transplants for deep planting for our course. The fish box plants have done extremely well and are way ahead of autumn leeks sown 4 weeks earlier and since planted outside. Anyway, I mention them because if you are interested in growing a late overwintering leek like 'Blue Solaise', now is the time to sow them. I have had such a good experience with the insulated fishboxes that I will be using them again. 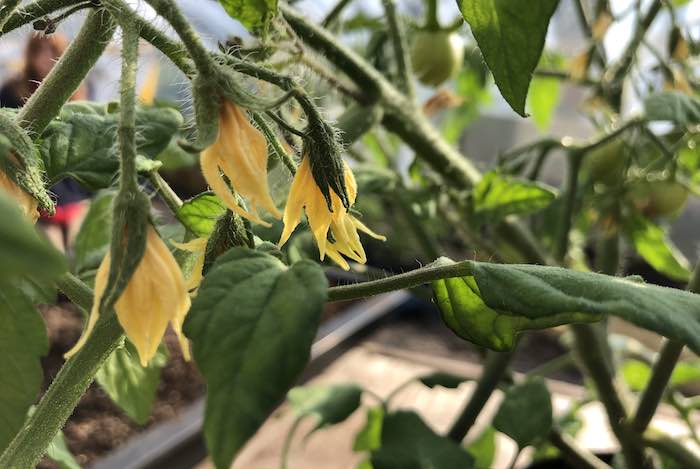 Tomato Maskotka If you want a first hand opinion on any aspect of fruit or vegetable growing but especially on tomatoes you should have a look at Nicky Kyle's website (http://nickykylegardening.com/). I don't pretend to know Nicky but often check her site for an opinion if I am wondering about a certain variety or looking for a detailed, blow by blow account of growing a particular crop. Saying there is a lot of text is an understatement, you should get the tea made before you start reading, but none of it is waffle and all is the result of Nicky's many years of hands on experience as an organic grower. It was on nickykylegardening that I first read about the bush tomato 'Maskotka' which has since become a regular presence in my polytunnel. The compact (approx 50cm height and spread) plants are ideally suited to large pots, baskets or bowls and produce huge yields of fruit without taking up much room. I have grown other bush or trailing tomatoes in the past and most were pretty average tasting but Maskotka has a superb tomato flavour; robust, yet sweet and fruity. 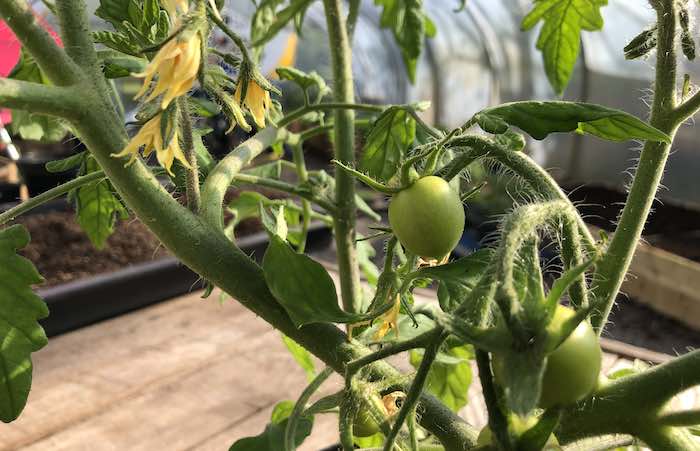 As you see, it is also very early to fruit. I sowed mine in late February and have potted on twice but they are already very substantial plants which are flowering freely and setting fruit. I am including them today as an unusual example of a compact tomato plant that does exactly what it says on the tin. If you have a small greenhouse or sunny, south facing sun room or porch, I highly recommend it. 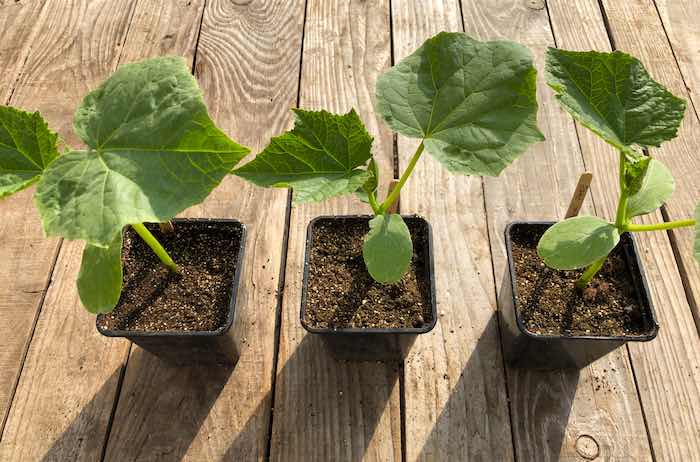 Cucumber seedlings - Sow mid April to late May It has been a balancing act trying to keep very tender cucumber seedlings alive and healthy while also keeping growth slow so they don't get too big before they can be planted out in the polytunnel. They have been kept in a propagator set at 14˚C which is about the lowest possible temperature for cucumbers as, like the French beans, the slightest whiff of frost will kill them. Cucumbers and squash will sit for 2 weeks or so after germination with only their seed leaves (the lower roundy looking ones) but once the larger, secondary leaves form, the plants begin to grow very quickly. The plants above were started in 7cm pots but were potted on last week to 12cm pots which gives them some fresh compost to keep them going for another couple of weeks. 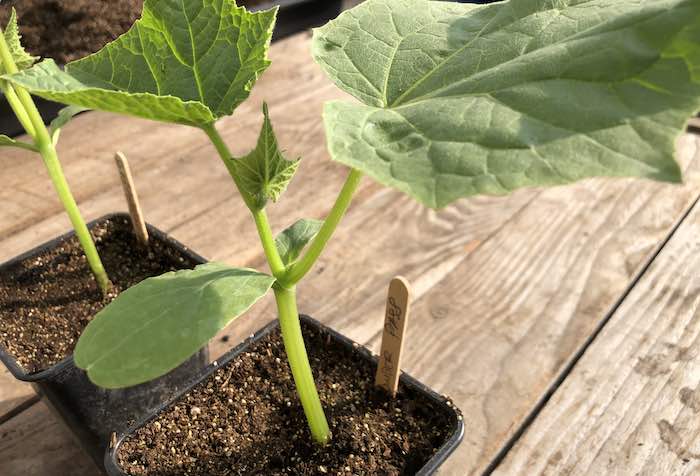 I know I mentioned this before but this is why cucumber and squash should not be sown until April as it will be very difficult to keep them happy if you can't plant them out; you will be both protecting them from cold and trying to keep growth in check so they don't get pot bound. Also, they grow so fast when conditions are right that later sown plants will be healthier in the long run than those you had to nurse for long periods through cold weather. If the forecast for the next few weeks is correct, I should be planting these in their final positions towards the end of next week, what is important is that I have a steady day and night soil temperature of 20˚C. 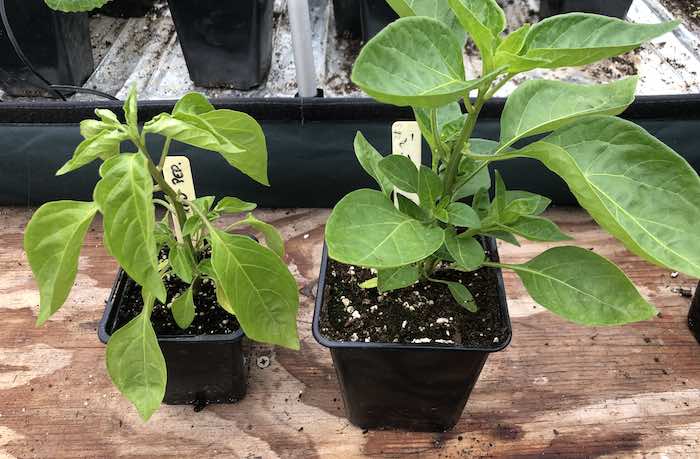 Potting on and feeding Speaking of potting on and fresh compost, here's an example of the difference in growth in only a week in a bigger pot. These chillis are the same variety (Aji Lemon) sown on the same date but the one on the right was upgraded from a 9cm to a 12cm pot 8 days ago. If you didn't see them together you might think the left hand plant was doing OK until you see what it could look like with a fresh supply of nutrients and more room for its roots. Either way, provided conditions are favourable, the best place for any plant is in the ground so the sooner potted plants can be planted out, the better. If you are growing edible crops in pots or containers for the full growing season please make sure they are regularly fed so they can meet your expectations. If anyone is interested I will do a piece on feeding container plants, you can reply to this mail and let me know. That's it for today, I will see you next week Andrew