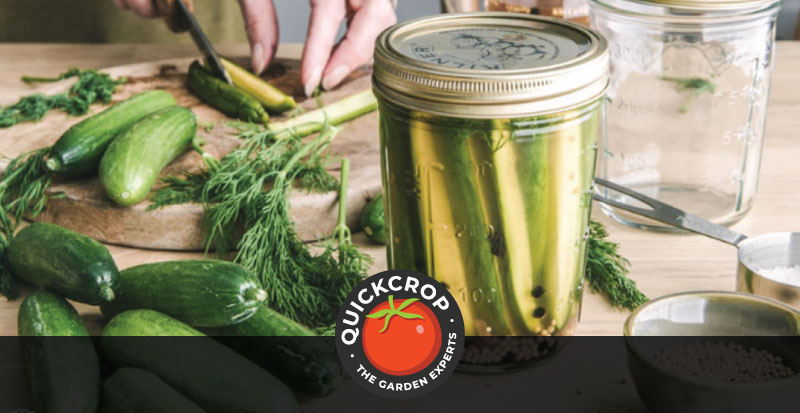 The humble cucumber is perhaps the single most popular food to use for pickles, so much so that over in the States the word ‘pickle’ pretty much means ‘pickled cucumber’. We’re a little more specific about them over in this part of the world, where a pickle refers to any fruit, vegetable or food that’s been pickled (or an unfortunate situation!). Further blurring the terminology is the fact that many people in the UK or Ireland like to refer to them as gherkins or pickled gherkins. Strictly speaking, gherkins are a smaller type of cucumber that’s been pickled. But we’ll get to that later in this post… 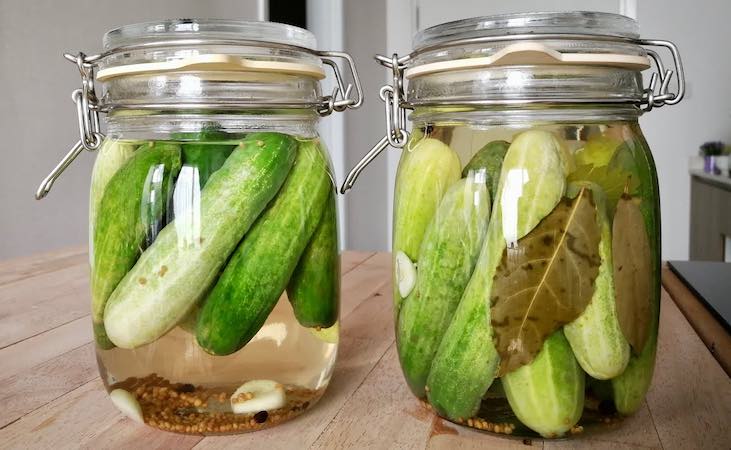 Pickling is a method of preserving fruits and vegetables that allows them to be stored for long periods of time. It also changes the texture and flavour of many fruits and vegetables in pleasing ways, bringing a ‘freshness’ to a food that you thought you already knew. In the case of cucumbers, the method usually involves immersing them in a mix of water, salt, vinegar and selected spices and leaving it to ferment. While people may have different preferences when it comes to cucumber pickles, generally speaking a successful pickle should have a crisp and crunchy texture, with the flavouring (or lack of flavouring) left up to the individual.

While you can purchase pickled cucumbers, mixed pickles and more in the shops, they’re not always great quality. Indeed, Americans who are accustomed to their own unique flavours frequently complain that pickles in the UK or Ireland just aren’t the same - whether they’re too sweet, too soggy or the balance is all wrong. Store-bought pickled cucumbers are also more likely to use extra preservatives or dodgy yellow dyes. For these reasons, it’s much better to try your hand at home made pickles. 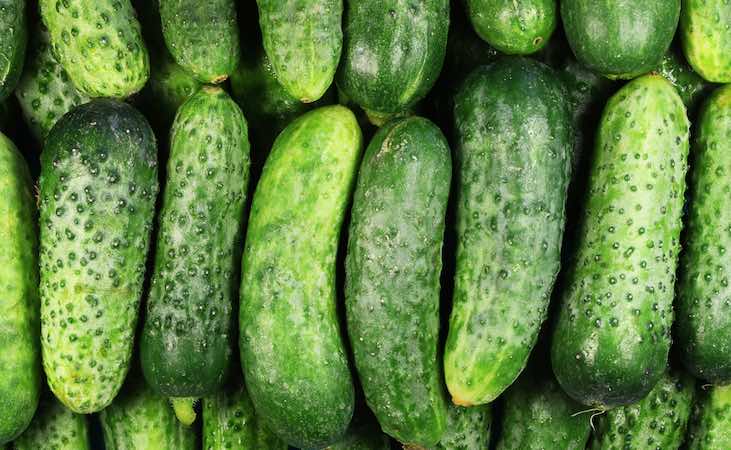 Similarly, it’s best to use homegrown cucumbers. Store-bought cukes tend to be coated in wax, which will do your pickle no favours. Homegrown will be fresher - and the fresher the cucumber, the better (and crunchier) your pickle will turn out. Growing your own also allows you to seek out particular types of cucumber that are especially suited to pickling or fermenting. We’ll consider two different types - slicing cucumbers and pickling cucumbers. While you can certainly use the former for pickling, the latter are ideal. Pickling cukes are usually shorter (3-6 inches) and "blockier" than slicing cucumbers, and have a bumpy or spiny skin. They're also crunchier and usually have a thinner skin, which means that the pickle brine can soak in better. Slicing cucumbers tend to result in softer, mushier pickles with too much seed. 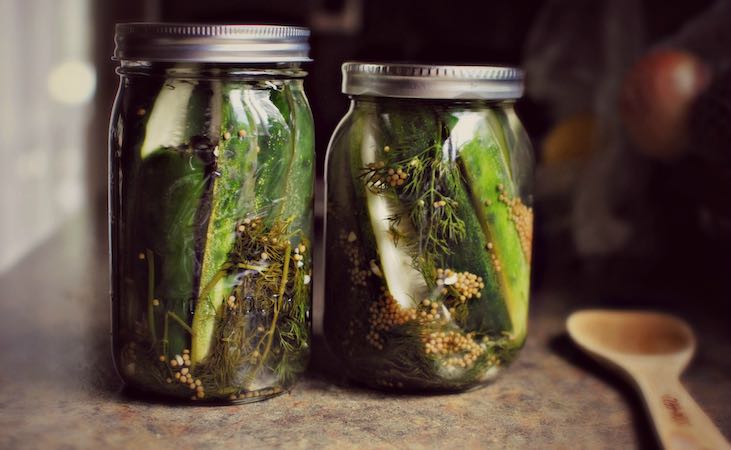 Cucumbers can also be pickled in a salt-based brine without vinegar (these are known as sour pickles). This happens via the process of lacto-fermentation. Lacto-fermentation depends on Lactobacillus bacteria, which is naturally present on the skin of a cucumber. Fermenting cucumbers in this way can be a little more difficult to get right than by pickling with an acidic solution. One handy tip is to add a small amount of calcium chloride to the pickling solution: this will help retain the desired crunchiness. Fermented cucumber pickles are also known as ‘sour pickles’ because of their distinctive taste.

Types of Pickled Cucumbers
In essence, pickled cucumber is a simple food. So it’s kind of amusing that there’s a dizzying number of ‘sub-types’: dill pickles, pickled gherkins, Polish pickles, half sour pickles, hamburger pickles… These are all really describing the same basic thing, just pickled in different ways. It’s also a testament to how small variations in the pickling process can have different and desirable effects on the end result. Let's take a look at some examples: 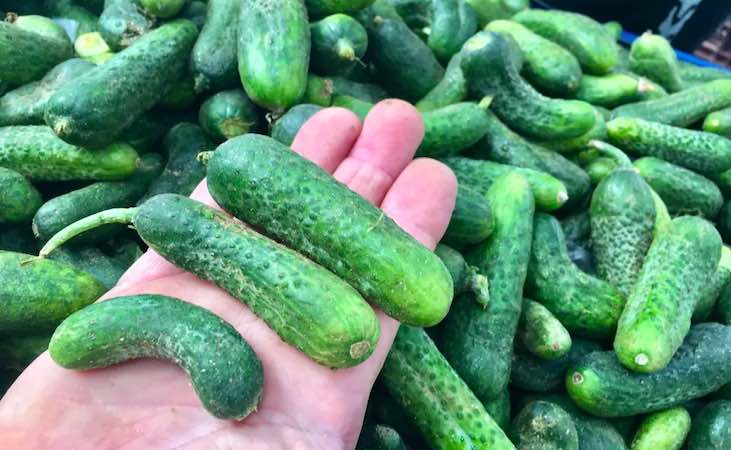 Gherkins
A gherkin is a baby cucumber that’s harvested before it’s reached maturity. They are commonly used in pickles because of the size (the smaller the cucumber, the quicker it ferments). Gherkins typically measure 1- 3 inches. Gherkins are best left to ferment for 2-3 weeks. When pickled they have a satisfying crunch and are a popular addition to sandwiches and burgers.

Dill Pickles
A dill pickle is made by adding cucumber to a salt, water and vinegar-based brine. The dill that lends it its name is added towards the end of the pickling process. Dill pickles can also be flavoured with a number of other seasonings, but dill seed is the crucial one. They can be pickled whole or in slices or halves. Because they are usually brined with vinegar, dill pickles are somewhat less crunchy than other kinds. 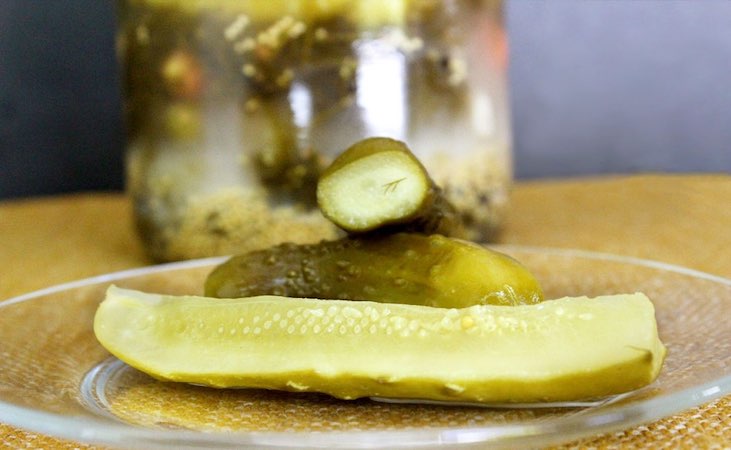 Kosher Pickles
Kosher pickles (or kosher dills) are so called because they were popularised by Jewish immigrants in New York. Kosher pickles tend to favour a natural salt brine over vinegar. The key ingredient is garlic and plenty of it, while dill is usually added too. Kosher pickles can be ‘half sour’ or ‘full sour’. Half sours ferment from roughly 6-8 weeks, after that they become ‘full’. The half sour will retain the cuke’s bright green colour and will have a milder, crispier taste.

Polish Dill Pickles/German Pickles
Polish or German pickles are similar to koshers in that they ferment in a natural salt brine, but they’re seasoned in a different way. The most common seasonings or flavourings are dill seeds, mustard seed, peppercorn or caraway seeds. Traditionally made in wooden barrels, the Polish dill pickle is known as ‘Ogórki Kiszone’, translating as ‘low salt cucumber’. It’s a tangy, sour pickle - but just how sour it is can depend on how long it ferments - you can generally start tasting after 3 days or so. 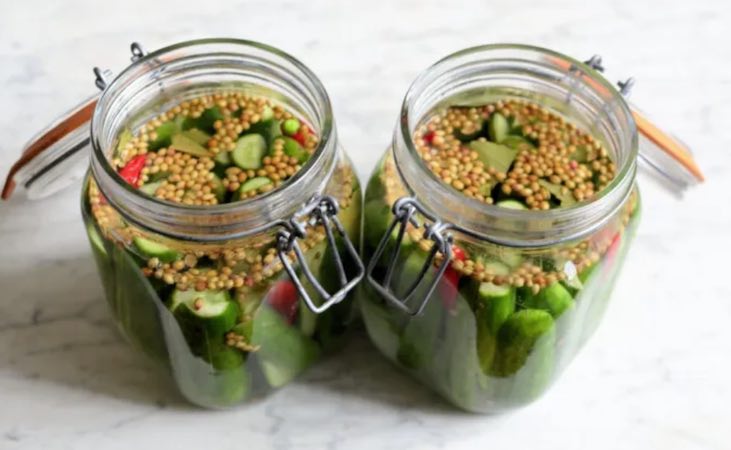 Sweet Pickles
These are pickled in a mixture of vinegar, sugar and spices. As the name suggests, this results in a sweeter and slightly sour taste. Spices like mustard seed, cinnamon or peppercorns can be added, while sweet onion is a popular touch that brings out the flavour in both the onion and the pickle. Sweet pickles are more common in the UK but they can be divisive or even blasphemous to some pickle ‘connoisseurs’!

Bread and Butter Pickles
These are thinly-sliced sweet pickles. Tangy and sweet, they’re a popular choice for burgers and salads. The vinegary taste can be rounded out with turmeric, celery seed or mustard seed.

Cornichons/French Pickles
These are extra-small pickles with a crisp taste, commonly used as a garnish or condiment. In France they are a popular choice to accompany pâtés or cold cuts. Cornichons are pickled using a smaller variety of gherkin, one that’s harvested before it has matured into a ‘true’ cucumber. At this point it will be 1-2 inches in length, with bumpy skin.

Now you have an idea of the array of different ways of pickling cucumbers - have some fun and enjoy your harvest!