I am sure you are sick of seeing pictures of my potatoes by now but I ended up digging out another barrow full of them on Sunday while I prepared a bed for Summer cabbage. According to the weather forecast we are heading for 'Arctic conditions' this week so I thought I had better lift any potatoes still in the ground to avoid any frost damage. Tubers close to the surface of the soil will freeze and then turn to mush when they thaw, this creates a foul smelling mess when it rots and can spread to neighbouring potatoes. 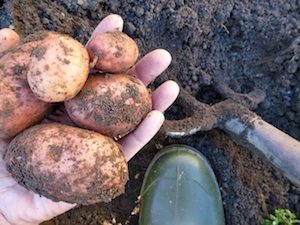 I washed some of the bright magenta 'Setanta' and creamy 'Orla' above so you can see the contrast in their skins, they were a welcome burst of colour for me on a dull Sunday afternoon . I wouldn't normally leave potatoes in the ground so late because they get eaten by slugs but this year they haven't really been a problem.

I think I mentioned it before but I put this down to covering the beds with seaweed after I removed the potato stalks (when they got blight) which seems to have repelled the slugs while treating the earthworm population to a feed. 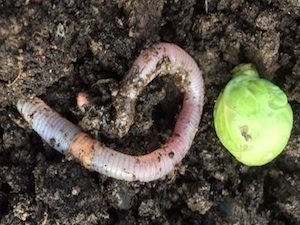 The image above is of a particularly large worm who has been gorging himself (and herself, they are hermaphrodites) on seaweed all Winter. I pulled off a nearby sprout to give you an idea of scale but unfortunately I think it just looks like a very small sprout (which it isn't) instead of a very big worm. Anyway I was delighted to see how much he/she was enjoying the seaweed and what a healthy specimen I had uncovered.

Earthworms are very valuable in the garden for helping with drainage and aeration of the soil but also with feeding your plants with their very fertile worm casts. You will find more worms in undisturbed soil so I feel a bit guilty about messing up their burrows when I dig out my potatoes but I do try to disturb the soil as little as possible for the intervening years of my four year crop rotation.

Good gardening practice tells us to remove any dead or dying vegetation from the soil surface to help prevent disease and discourage slugs but this also removes food for the earthworm in the process. Earthworms feed on rotting organic material so keeping a food supply in your beds is important to encourage worms, this is another good argument for adding layers of mulch to your garden throughout the year. 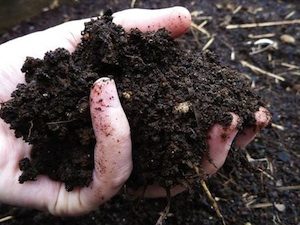 Feeding earthworms also has a good 'look after the pennies and the pounds look after themselves' feel about it, if you concentrate on building your worm population your vegetables will look after themselves. Worms produce perfectly balanced plant feed and convert nutrients into a from most easily absorbed by plant roots, they also produce humus (not hummus, at ease vegans) which is the key ingredient in healthy soil. Worm waste or wormcast can contain 40% more humus than the surrounding soil; it is also five times richer in nitrogen, seven times richer in phosphates and a huge 11 times richer in potassium than a moderately fertile soil 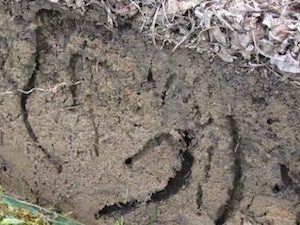 Earthworms are also very important for aeration and drainage. In Scotland and parts of Northern Ireland farmers are experiencing severe waterlogging problems caused by the New Zealand flat worm which preys on and has seriously damaged earthworm populations. The earthworm tunnels not only drain the land but as the worms move through them they act like tiny pistons pumping oxygen from the surface deep into the soil as they descend into their burrows. This oxygen enables beneficial bacteria and microorganisms to thrive and improve the fertility of the soil.

I use a seaweed, compost and/or manure mulch depending what I'm growing but leaf mould or moderate amounts of grass clippings will also be very beneficial. If you still have leaves around the garden (I know I do) is is still worth collecting them now and making a simple leaf mould bin from chicken wire and four wooden stakes so you can produce your own leafmould. A leaf, compost or manure mulch will protect your soil, add nutrients and feed earthworms at the same time so if you don't mulch regularly already 2017 might be the time to start this soil healing process.