I was working my way around my garden yesterday, checking on things and harvesting a bit of this and a bit of that. As I worked my way through a few small jobs I thought you might like to see what I'm doing as it might be of help when you're harvesting your vegetable garden.

I have quite a large garden as we use it both for the house but also as a trial garden for the business. I'm also lucky enough to have an 8 metre polytunnel which is pretty much essential in the North West of Ireland. The soil started off very poor and acidic but over 3 years now it's starting to get into better shape. The biggest input is 'Envirogrind' soil improver compost of which I add 3 tonnes a year spread over an area of about 120 square metres. 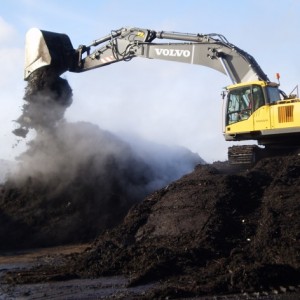 Envirogrind is a municipal green waste compost made up of composted green material and fish waste and is pretty much solely responsible for the success of my garden. I'm not plugging it, just telling you what I use but, it is, of course, available in our shop. We supply in 80 litre Envirogrind or cubic metre Envirogrind bags which you can access by clicking the links. For all the crops I'm covering take it that I applied at least an inch of envirogrind to the surface of the soil and other than a little bit of Seamungus at planting time I haven't used any other plant feed since.

A note on using municipal compost Municipal compost like Envirogrind is a very good source of bulky organic matter, really the best available unless your can compost on a large scale yourself. All municipal composts have a quirk which is worth being aware of: depending on how long they have been composted they can contain a high quantity of woody material (Envirogrind is particularly low which is why I like it).  This is all fine as when it rots completely it will add organic matter and nutrients to your soil. The problem is while it rots it actually takes nitrogen from the surrounding soil to complete the process which it then releases again when it's done. 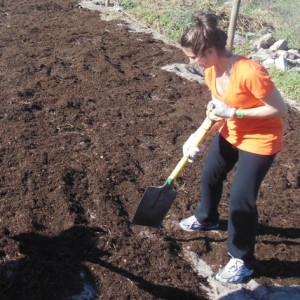 Surface dressing is the natural way to add nutrients to soil which will be broken down naturally and added evenly to the roots below. Before we came along nutrients were never buried in the soil, if in doubt do it the way nature does it.

Anyway, sorry I went off the point a bit there, back to the garden: There are plenty of crops ready for harvest at the end of July despite the late start to the year so I'll walk you though the garden and we'll pick and discuss as we go.

Harevsting French Beans First up French Beans. I've planted cobra Climing beans and dwarf Safari, I've sown them in the tunnel as French beans don't like being exposed to the elements and will perform much better if pampered.Remember I'm in the North West, if you have a more Southerly garden they may do perfectly well outside.

I sowed them in modules in th 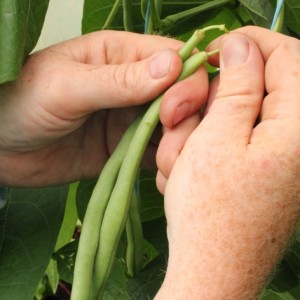 e April to plant out 4 weeks later and have been harvesting them since the end of June. It's very important to pick your beans regularly as if you don't the plant will put most of its energy into ripening the beans in the pods rather than making new flowers and beans.

Harvesting French Beans is done by holding the stem as you pull off the pod to avoid damaging the plant. If you want to be extra careful use a pair of scissors. You are best to pick them small as they will be more tender with a greater yield obtained from the plant with constant picking.

Harvesting and caring for Cucumber If you read up about growing cucumber it can look pretty complicated, especially the early stages. I had been put off in the past but have tried it for the last 2 years and can't quite figure out what all the fuss is about. I grew 'Cucumber Passandra' from our fabulous seed range and didn't have any problems. 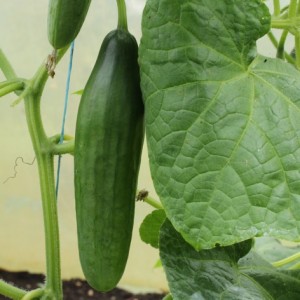 Anyway, cucumber plants when they get stuck in produce a lot of fruit so you are better off harvesting them when they're small as the taste and texture is better. Also, harvesting encourages new fruit production so it makes sense all round.

Don't pull the fruits from the vine, use a sharp knife to avoid damage.

The harvest season is from mid July to the end of September with regular picking producing impressive amounts of fruit.

Tomato Crop Care Harvesting Tomatoes is pretty easy, just pick them when they're ready. Tomato plants on the other hand to take a bit of care to make sure you harvest a good crop. 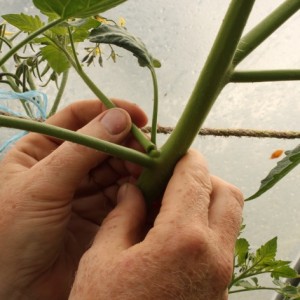 Pinching out side shoots If you've got near harvest time without realising you need to do this you will have a big, unruly plant to contend with and not as much fruit as you's like. Left to it's own devices a tomato plant will grow into a large rambling bush so we need to control this to end up with the single high producing vine we want.

The side shoots grow in the crook between the main stem and a leaf branch and will grow into a stem as large as the main one if you let it. Break these off when they're small by bending them one way and back the other, if you've let them get bigger cut them with a secateurs to avoid damaging the plant.

Removing the lower leaves Remove the lower leaves from your tomatoes around mid to the end of July. This helps air to circulate around the base of the plants lowering the chance of disease but also allows more sunlight to reach the lower fruit helping it to ripen. I remove the lower 3 or 4 sets of leaves cutting about an inch and a half from the main stem. 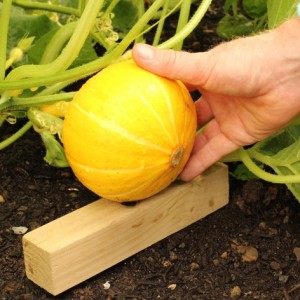 Squash Crop Care If you have squash growing outside or in the polytunnel or greenhouse you should have some developing fruits on the vines. It's a good idea to get them off the ground to cut down on insect attack and the prevent them rotting on the ground. In this case I've used a piece of wood as I had it lying around but a piece of slate or a flat stone will do just as well.

Harvest Squash up until the first frosts fro October till the end of November.

To be continued...... Still plenty of vegetables to go, please check back soon.