What are Green Manures? Green manures are crops sown to cover bare soil after crops are harvested. The term 'green manure' can be confusing as most people will initially think of animal manure whereas green manure refers to a range of plants grown to feed your soil rather than your family. A green manure crop will benefit the soil by providing cover to suppress weeds, will store soluble nutrients preventing them from being washed out by rain and in some cases (field beans and clover) will actually add nutrients (nitrogen) to the soil. 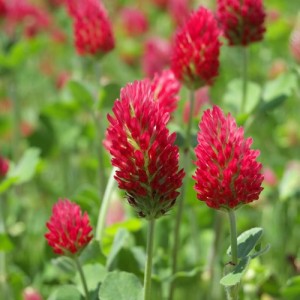 A patch of lovely weed free soil can look great to the vegetable grower as it is usually the end result of some hard work in preparation for sowing but remember bare soil needs to be covered to protect it from the elements. If a follow on crop isn't planned after harvesting (likely in Autumn) it is important to cover the ground to protect nutrients from being lost and the area becoming colonised with weeds. You can protect your garden soil by covering in a layer of mulch, by laying a black plastic sheet over it or by sowing a green manure crop. Sowing a green manure crop has the following benefits: Growing Green Manures Green Manures are best sown on a weed free plot so hoe well before sowing. If you have time you can employ the 'stale seed bed' technique which means hoeing the area and leaving it for 10 days or so to allow any weed seeds to germinate. Hoe again and rake of weeds and then sow you green manure. The idea is that you will have hoed off 2 generations of weeds and should be left with a relatively clear patch of soil. 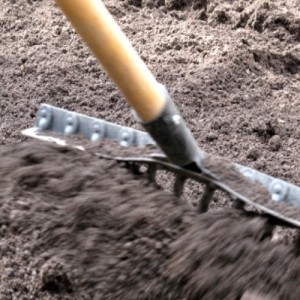 Broadcast sow (scatter) the seeds around the area you wish to cover at the approx amounts recommended on the pack. The seeds are then raked into the soil and left to germinate. If you have a particularly weedy plot you can sow the manures in rows about the width of your how apart do you can control unwanted weeds while the green manure crop getting established. Digging in Green Manures Most green manure are best cut down before flowering to prevent the crop setting seed and becoming a nuisance later on. Plant stems also become tougher and more woody in the flower stages so take longer to break down, younger more tender stems will be incorporated into your soil quicker and with less waste. 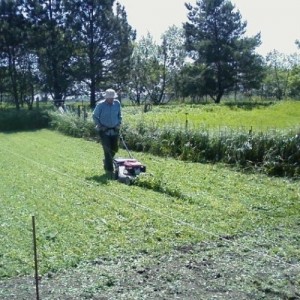 The best method is to mow or strim the crop a week or two before you want to dig it into the soil to allow it to break down a little. If you are following a no-dig regime you can leave the mowings on the surface of the soil as a mulch and allow them to break down naturally. I like to grow a bulky nitrogen fixing crop like field beans in early Autumn, I cut them down and add a heavy mulch of compost on top before covering the whole lot with seaweed and/or black plastic for the Winter. I am located in the very wet North West of Ireland so need a little extra protection from the elements! What green manures to sow? There are a broad range of manures you can sow depending on the time of year, as already mentioned clover needs a long growing season so is best sown earlier in the year (after new potatoes in July is an ideal time) while crops like field beans, Winter vetch and Phacelia can be sown later in the year. Rye grasses are often used but I tend to avoid them as they can be a problem getting rid of the following year and also releases a chemical that inhibits seed germination. If growing rye wait at least a month after digging in before sowing a new crop. Here's a list of our favourite green manure crops: 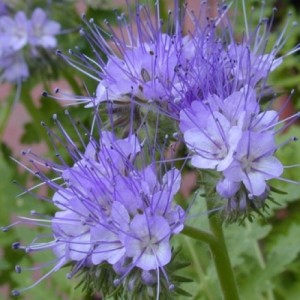 Phacelia Tanacetifolia Pretty Phacelia is a very quick growing annual green manure that can be sown successfully from march till September. The plants grow up to 1m in height and is tolerant of cold temperatures so should survive the winter if it's not too severe. Phacelia is particularly good at smothering weeds and have an extensive root system which improves soil structure. It will self seed to easily so if using it as a green manure it's a good idea to dig in before it flowers. If you are covering a spare patch of ground for a longer length of time let it flower, they are beautiful. Flowers will appear 6-8 weeks after sowing and will remain in bloom for 6-8 weeks more. Phacelia is an excellent flower for attracting honeybees and hover flies. This pretty green manure can also be sowed near the vegetable garden to attract these beneficial insects and help keep your aphid population under control. Click here for Phacelia Tanacetifolia Seeds 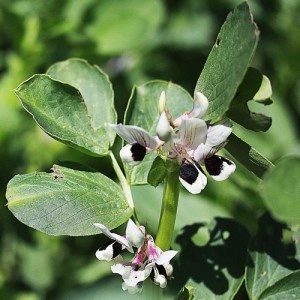 Field Beans Field beans are an excellent overwintering green manure which unless the winter is very cold are usually winter hardy. It germinates easily in the cooler weather from September to early November but can be sown earlier if you wish. Very popular choice. Field beans have deep roots which help break up the soil ready for the spring. The hardworking roots also store nitrogen in the root nodules which provides an excellent free plant feed in the spring. A perfect green manure to grow if your growing cabbage, kale, brussels sprouts and any other green leafy crops. You can either cut the plants down in the spring and dig in or cut down and re-grow if you're not ready to cultivate your plot. It is best to dig in before flowering about 3-4 weeks before the new seasons planting. Will not tolerate drought conditions so not a big issue in Ireland these days! Click here for Field Beans Seeds 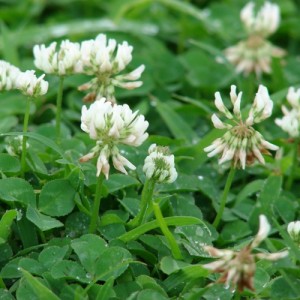 Clover Clover is a handy fast growing green manure which is an effective nitrogen fixer so perfect for adding some va va voom to your garden soil. It provides very good ground cover which helps smother weeds and has an extensive root system which prevents nutrients leaching out over wet winters. Clover can also be sown as a weed cover around members of the brassica (cabbage) family where the nitrogen in the roots feed the cabbage, you may need to trim the clover once or twice in the season to prevent it competing with your cabbages. Clover can be sown between April and September with an early sowing being best for good ground cover over the Winter. Clear ground of weeds before sowing as clover is a poor competitor with weeds in the early stages, once established it will form mat of bulky foliage which keeps weeds at bay. Follow with greedy, nitrogen loving plants like cabbage, kale and broccoli. Flowers are attractive to beneficial insects like bees and ladybirds which in turn help pollination and insect control in the vegetable garden. Click here for Clover Mix Seeds 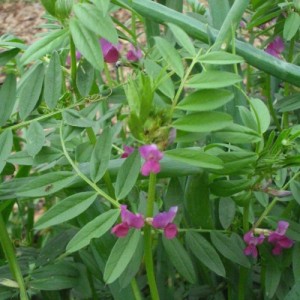 Winter Vetch or Winter Tares Also known as Winter Tares, Vetch can be sown anytime from March to September. It fixes nitrogen and can be mixed with other green manures. The plants establish quickly surpressing weeds as it quickly forms a dense ground cover foliage. Nitrogen is stored in the roots which should be dug in with the rest of the plant in the Spring. Follow with nitrogen loving crops like leafy greens and members of the Brassica family. Cut down or hoe the crop down (best done before flowering when stems are softer and break down quicker) before digging in the whole plant 4-6 weeks before the ground is to be used. Like rye grass vetch also inhibits seed germination so make sure you stick to the 4-6 weeks, this is only an issue for seeds so planting seedling plants straight after digging is fine. Sow seed at approx 16g per square meter. Scatter on the surface of the soil then rake in and tramp down. Vetch is a member of the legume family so should be rotated with other members of that family. Vetch doesn't like acidic soils so choose another crop if this is an issue in your garden. Click here for Vetch Seeds 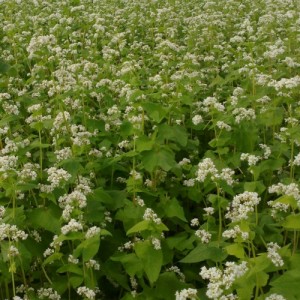 Buckwheat Buckwheat is a quick growing green manure ideal for covering the soil in summer/autumn. Attractive to beneficial insects in addition to its green manuring value. Germinates in 3 or 4 days and produces a dense canopy of foliage that soon smothers and out competes weeds. Rapidy recomposes to improve soil structure and to add valuable organic matter. Best to dig in while young before tough woody stems are formed as this takes longer to break down. Make sure to dig in before it goes to seed as it re seeds very easily and can become a bit of a pest. Clear area of weeds especially perennials, rake soil to a fine tilth. Broadcast sow seed and rake in to a depth of 1cm, can also be sown in rows 20cm apart. Firm soil and gently water. Keep moist until seed has germinated. Grows well on poor soils and is tolerant of acidic conditions. Click here for Buckwheat Seeds 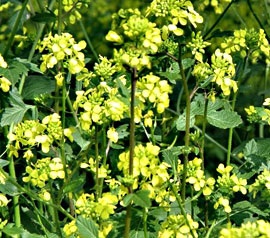 White Mustard White Mustard is one of the quicker growing manures and can be sown between March and September. This annual is half hardy and is happy in most soil types. Its main benefit is the production of large amounts of stems and foliage, very good if your garden soil is lacking in organic matter. The plants reach maturity after 4-8 weeks growth when they should be chopped and dug into the first few inches of your soil. Let the mustard plants reach about 40 centimetres when the first flowers appear before digging in. Remember mustard is part of the brassica family and should be included in the brassica rotation to avoid diseases like club root and other related diseases. Interestingly mustard can be used to clear clubroot from a vegetable patch from repeated sowings. The idea is that being a brassica it will activate the clubroot spores, the plant is then dug before maturity which therefore breaks the lifecycle of this disease. Club root can remain dormant in your soil for up to 20 years so this is good news if you have it. This method will take a while on account of the repeated sowings but a very satisfying organic way of combating this tricky condition.