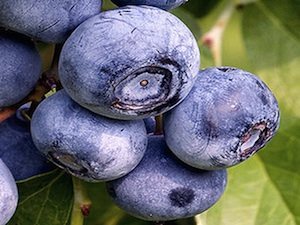 Blueberries are delicious and extremely high in antioxidants which is why it is regarded as a super food. Plants are easy to grow provided you use an acidic or 'ericaceous' compost.

Site and Soil
Plant in moist, well-drained, acidic soil in a sunny, sheltered spot. While blueberries are tolerant of shade, better crops (and autumn colour) are obtained in the sun. 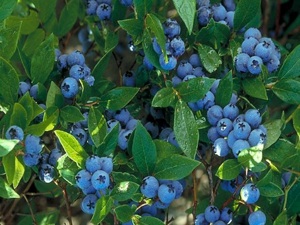 There are several different forms.

The main blueberry type is the northern highbush blueberry (Vaccinium corymbosum), which is extremely hardy, has large fruits, and high yields. It needs a significant period of winter cold to initiate flowers and therefore fruit.

There are also the extremely hardy lowbush blueberries, V. angustifolium and V. myrtilloides, and ‘half-high’ blueberries, which are a cross between the two.

While some cultivars can set a fair crop on their own, all yield much heavier if planted near to another different cultivars. Flowering can occur early or late in the spring depending on the cultivar, so check that the plants flower at a similar time to ensure successful cross-pollination. When buying, select plants that have multiple shoots at the base. These should all be tipped back on planting to encourage further side branching. Cut out weak stems completely.

If growing blueberries in garden soil, add plenty of bulky, acidic organic matter such as pine needles or composted conifer clippings. Avoid farmyard manure as this is too rich for the plants and will scorch their fine, fibrous roots. Ericaceous compost is useful to help acidify the soil, but its structure is very fine and so it will not help create optimum drainage conditions.

For pot culture use a container 30cm (12in) in diameter for a small plant, and a half-barrel or similarly larger pot for larger plants. Make sure the container is either glazed or lined with polythene sheeting (pierced at the base) to avoid moisture loss.

Plant Care
Blueberries are relatively easy to look after. Ensure the soil has a constant pH of 5.5 or lower, to avoid plants developing lime-induced chlorosis and associated iron deficiency. Acidifying materials can be added at planting, but check the pH of the soil in spring and add sulphur chips if the pH needs to be lowered. This shouldn’t be necessary with container-grown plants provided ericaceous fertiliser and rainwater are used. 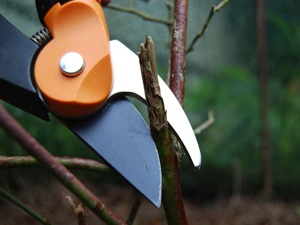 Pruning
Blueberries fruit on short sideshoots produced during spring or early summer of the previous year. They also produce a second late flush of fruit on the tips of the current year’s growth. Pruning is rarely needed in the first two years, when it is best to simply aim for an open centered bush, removing any crossing or misplaced branches.

Prune any time over the dormant season (November to March), but ideally in late February or early March when the fruit buds can easily be distinguished from the leaf buds. Fat buds produce flowers and fruit, while smaller, flatter buds form shoots and leaves. A mature bush should contain about one-third old, one-third middle-aged and one-third young stems.

Pests and Diseases
Birds are the main pest of blueberries. Erect taut netting over the plants as soon as the fruits start to show any purple colouration.

Harvesting
Flowers mainly appear on one, two, and three-year-old wood in spring. Fruit start to ripen from mid-summer onwards, changing colour from green to dusty blue. At this point they can be harvested. Pick over the plants several times as not all the fruit ripens at the same time.

The fruit can be eaten fresh; alternatively, they can be dried, frozen, made into preserves, or used in cooking. They are extremely rich in antioxidants and vitamins (especially vitamin C) so have many health benefits.