Onions are some of the easiest things to grow and require very little looking after. As our friend Dermot Carey (last head gardener of Lissadell House) says if you can't grow onions you might as well hang up your gardening gloves and take up golf. Now, Dermot is a professional vegetable gardener and while I agree onions are an easy crop there are a couple of things worth looking out for to make sure you get a successful harvest. Most of us will know you can either grow onions from 'sets' or seeds so here's a little information on both:

Onion Sets Onion sets are just immature or part grown onion bulbs from the previous year. They are produced by sowing onion seed very thickly which results in plants with very small bulbs. These little onions are sown the following spring to mature and produce full grown onions. Sets are the easiest way for the beginner to grow this essential crop as they are so easy and pleasurable to set out. You won't get as wide a choice of varieties but you will have a greater chance of success. When to sow onion sets The best time to sow onion sets is mid March to mid April. If you are sowing red onion sets is better to leave them till April as they are more prone to bolting and a later planting may help. 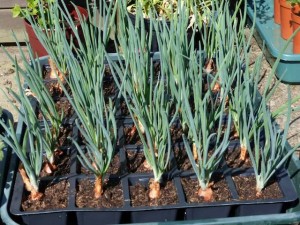 Sets can also be sown in Autumn from September to early October. If you have a wet garden or live in an area of high winter rainfall growing in raised beds is recommended as sets left in wet soil are likely to rot. You can also plant sets in modular trays which can be kept in an unheated greenhouse or tunnel for planting out when the weather allows from mid March. Site and Soil Onions like an open sunny site. Your soil should be fertile with a good bucket or two of well rotted garden compost raked into the surface layer as onions have relatively small and shallow root systems. Avoid manure or high nitrogen feeds as this can result in thick necks which won't try properly and will rot from the inside out. If you are looking for a good soil amendment before planting onions I can happily recommend 'Envirogrind' soil improver which I use every year, I just spread it on the surface of my beds and cover with the 'Growgrid' onion planting mat I mention below. Sowing Onion Sets Once you have your bag of little golden onion sets you'll have to pick the best ones to sow. This is very important, if you're doing your job properly you'll end up throwing half of them out so bear that in mind when you're ordering. Here's a quick diagram to help you pick the best.

From left to right: Planting (If you have any left after sorting them.....) Push the sets about 1 cm into loose soil approx 10cm apart, leave about half of the onion showing above the soil. Birds seem to love pulling your handiwork out of the ground and scattering them round the garden. You can solve this by placing enviromesh or cloches over them till they get going. If you want to be cleve 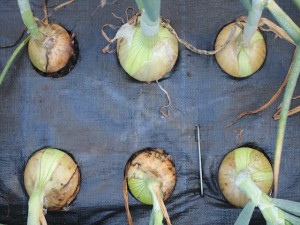 r and save weeding later on you can plant through a sheet of black plastic. Spread the plastic over your prepared bed, make a hole just large enough for each set and just pop them in. We stock 'Growgrid' onion planting mats which are a ready made version with pre cut holes. I use them every year and find excellent. The mats have a grid of heat sealed holes spaced at 15cm intervals which is perfect for growing medium to large sized onions. The heat sealing is the trick and prevents the mat from unravelling.  I have been using the same mat for the last 4 years and it is still going strong, it is one of the best value items in my garden. Sowing Onion Seeds 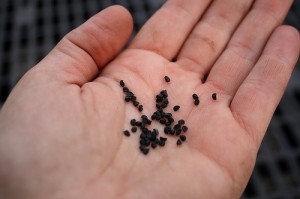 You have a much better choice of variety when you grow from seed but you need to start off much earlier in the year. You will need a greenhouse and heat bench to get them going as you're sowing late January to February. The best way is to sow 4 seeds per cell in a modular tray. You can move the tray from the heat bench around mid march but keep inside till early April when you can begin hardening off. Put your trays out on days without frost but back in again at night. You can plant them in their final positions in early May (Late April if not too cold) spacing them in a staggered pattern 30 x 30cm apart. Spring Onion 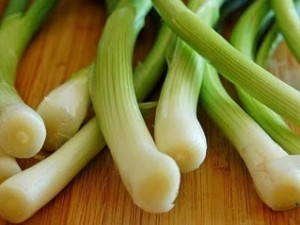 I never had much success with spring onions until I tried Ishikura. Most people, including me struggle with the popular 'White Lisbon' which produces a weedy looking result. You will get a scallion much more like the larger crunchy variety you're used to in the shops with my new best friend, Ishikura Bunching. You can sow them from late march in a greenhouse and continue outside until July. We find the easiest way of growing them is in modular trays. Sow 8-10 seeds in each module and plant the whole lot out 4 weeks later. There is no need to separate them making it easy to harvest a bunch at a time when you need them. Your scallions will be ready to pick 8 to 10 weeks after sowing and don't last long once ready. It's best to sow a new lot every 2 weeks or so. Onion Problems The most common headache you'll have in Ireland is downy mildew. This is because of our damp climate and why we recommend 'Santero' and 'Golden Bear' which have resistance to it. To try to avoid it keep your onion bed weed free with plenty of air circulation. If you have a wet garden it's also worth growing on ridges or in raised beds to avoid wet, waterlogged conditions. White rot can also be a problem but if you stick to a good rotation system you should be able to avoid it. Do please heed this advice as if you do get it you won't be growing onions in your garden for 7 years. You've been warned! Varieties for Spring Planting: Santero F1 Resistant to downy mildew which can ruin gardeners onion crops. Santero produces an excellent quantity and quality of onion without any mildew problems, great news for onion growers. Stores extremely well. Sturon An RHS Award of Garden Merit variety producing well sized semi-round bulbs with good keeping qualities. A standard, round globe shape with a sweet and mellow flavour, yellow flesh and light brown skin. Sturon is bolt resistant and stores very well. Centrurion Centurion is an early maturing variety that keeps well. Uniformly globe shaped bulbs with even skin colour - excellent eating onions which are good enough to show. Rumba Rumba Onion sets are a top performing crop variety that’s ideally suited to growing in the our climate. Producing high yields of large round onions with a sweet flavour. A good all rounder. Stuttgart Stuttgart onion sets produce firm semi flat shaped onions with a vibrant golden skin colour. They have a deliciously crisp and mild flavour, are slow to bolt and store very well. Varieties for Autumn Planting: Radar Radar onion sets for autumn plantering and overwintering. They are extremely frost hardy and produce nice round bulbs. Shakespeare Shakespeare is a brown skinned variety with excellent storage potential. Has good resistance to bolting. Senshyu Yellow Senshyu Yellow onions are a very popular overwintering Japanese variety that have a high yield. These yellow globe onions are a very hardy variety with golden skin and white flesh. Red Winter Red Winter onions are a heavy yielding variety of autumn onions that store very well. They are a mid to late maturing variety that are great for cooking with or using as an addition to any salad. Onion Seed: Golden Bear F1 This is the one to grow if you have ever had White Rot on your onions as this variety is resistant to it. It also has good resistance to grey mould and some tolerance to downy mildew. Matures early and has a very high yield of perfect onions. Spring Onion: Ishikura Bunching An outstanding variety, perfect for bunching. Leaves are upright and dark green with straight long white stem. If you've been disappointed by spindly spring onions in the past, try this you'll never turn back! Perfect.